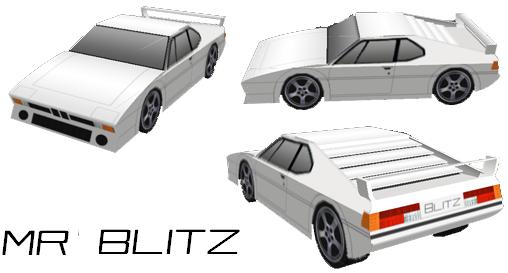 The popular open-formula race at MyControl Speedway had a support race for the first time this week, in the form of a one-make race consisting of Mishi Rossini's newly released MR Blitz. The car is designed especially for racing, and is one of the fastest cars seen at MyControl Speedway, with several 20 secons laps. This was the first event in which the car would establish its racing pedigree, as well as the first event at MyControl to have all drivers in the same car.The race was short, a 15 lap sprint, and was contested by Mango Birdbrain, Suzy Cudihy, Kandy Tomorrow and Seph Swain. Suzy was the only driver to not have hat at least a small opportunity to get used to the car and as such was at a disadvantage.The grid was headed by Mango Birdbrain, with Suzy Cuddihy occupying second spot, followed by Seph Swain and Kandy Tomorrow at the back.It is often said that the most important part of a race in Formula 1 is the first corner, and this was definitely the case in this Blitz Race. A big crash in the first corner took out 3 of the 4 drivers, all taking a long time to recover. Kandy Tomorrow, after starting at the back of the pack, carefully found her way around the pile-up and set about building a large lead. In fact, she had completed 4 laps before anyone else had even completed one.As the crash was put behind the drivers, they fell into an order: with Suzy Cuddihy second, Seph Swain third and Mango Birdbrain bringing up the rear. Suzy then began to tumble though, as Swain pushed ahead of her into second place, shortly before Mango took third from her a lap later, leaving her bottom. The main battle was fought between Seph Swain and Mango Birdbrain. Mango squeezed into second place on lap 6. 3 laps later, Seph stole back the silver spot. He held it for another 3 laps, until Mango snuck past again and dug in, holding on until the finish. Kandy Tomorrow was never caught after the disaster on the first corner, and took gold. Suzy had a hard time in an unfamiliar car, and finished 4th.Here are the stats:1: Kandy Tomorrow - 15 laps 2: Mango Birdbrain - 11 laps 3: Seph Swain - 9 laps 4: Suzy Cuddihy - 5 lapsThis race was a preview of what we can expect from the Blitz Cup, a tournament to be held between Blitz drivers. To compete, you will need to buy a Blitz. They cost L$999, and are available from the MR Cars shop at: http://slurl.com/secondlife/Urbane/38/18/22. Alternatively, you can pick up a landmark from the RedLine Racing garage at MyControl Speedway.MyControl Speedway www.slurl.com/secondlife/Magrathea/246/54/701/ Group: MyControl Speedway speedway.mycontrol.de ViSdP: MyControl GmbH & Co. KG Sommerbergstraße 14 34123 Kassel, Germany 0800-MYCONTROLMyControl Speedway is a motorsport race track in Second Life. Between the offical racing events the track is open for public use, drivers' trainings and for building and improving SL vehicles.

03-04-2021 | IT, New Media & Software
Mango Animate Software Co., Ltd.
Mango Animate Provides a Graphic Characters Maker
Recently Mango Animate has released a free graphic characters(https://school.mangoanimate.com/top-10-graphic-characters-download-website-you-should-know/) maker for its users. This software program equipped with skeletal animation will turn static images into graphic characters easily and is a perfect tool for animators or content creators to grab readers’ attention. Mango Animate Character Maker(Mango Animate CM) is designed for users from all walks of life to easily create stunning graphic characters in a fraction of a moment with themes
02-26-2021 | Business, Economy, Finances, B …
Syndicate Market Research
Global Mango Market 2021 Applications, Leading Manufacturers, Analysis, Demand a …
Syndicate Market Research recently launched a study report on the global Mango market project light on the significant drifts and vigorous cannon into the evolution of the trade, which includes the restraints, market drivers, and opportunities. The report talks about the competitive environment prevailing in the Mango market worldwide. The report lists the key players in the market and also provides insightful information about them such as their business overview,
12-17-2020 | IT, New Media & Software
Mango Animate Software Co., Ltd.
Mango Animate Offers Versatile Explainer Video Software
For the average business people seeking to elevate their business to new levels, an explainer video can be the ideal marketing tool. Explainer videos catch people’s eyes quickly and if done right, will keep them interested until the desired message is passed on. The Mango Animate Animation Maker (Mango Animate AM) is one of the best explainer video software (https://school.mangoanimate.com/best-explainer-video-software/) available for use by businesses today. Developed by animation software
10-30-2018 | Advertising, Media Consulting, …
QY Research, INC.
Mango Jam Market Growth by 2025: QY Research
In its recently published report, QY Research has provided unique insights about global Mango Jam market for the given period. One of the main objectives of this report is to categorize the various dynamics of the market and to offer latest updates such as mergers and acquisitions, various technological developments, new entrants in the market, which make an impact on different segments of the global Mango Jam market. The scope
07-17-2018 | IT, New Media & Software
Transparency Market Reasearch
Processed Mango Product Market - Expected to Reach US$ 2,043 Mn for Primary Proc …
Processed Mango Product Market - Snapshot The variety of processed mango products is endless, and variations exist from country to country and region to region. The processing technique of processed mango products is of two types i.e., primary level and secondary level. Request a Brochure For Latest Industry Insights@ https://www.transparencymarketresearch.com/sample/sample.php?flag=B&rep_id=42872 Primary processed mango products are produced from fresh mature mango having a certain texture, sensory parameter, and standard nutritional properties, whereas
06-26-2018 | Business, Economy, Finances, B …
Market Research Hub
Global Mango Puree Market Insights & Development Status Recorded till 2025
The market for Mango Puree is growing with the expansion of this Industry Sector Worldwide. Market Research Hub (MRH) has added a new report titled “Global Mango Puree Market Research Report 2018” which offer details about the current trends and analysis, as well as scope for the near future. This research study also covers information about the production, consumption and market share based on different active regions. Furthermore, an anticipated
Comments about openPR
Your portal is fast, simple, and easy to use. Others may have more functions but they also demand more editing time, you have to preformat the text in order to achieve a good result etc. I think openPR is really fantastic!
Andreas Knepper, wallmedien AG