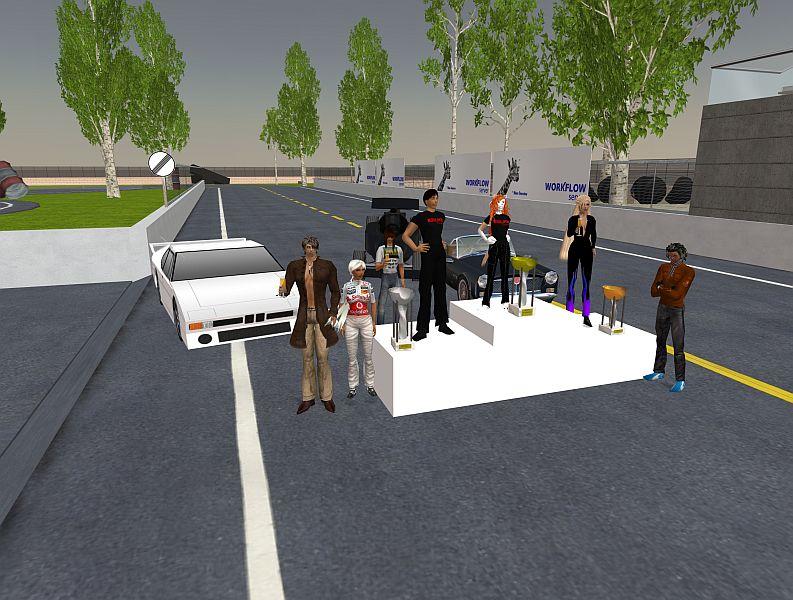 The open-formula race has taken place, and despite suffering from the absence of some key drivers, didn't disappoint in terms of action.During the qualifying session it became apparent that a few important drivers were missing, namely Yetrates Bates, Peldon Cordeaux and Caine Beresford. The absence of these top 5 drivers allowed a chance to some of the slower and less experienced drivers to have a run in an open-formula race. RedLine Racing owner Mishi Rossini was seen putting in a few laps during qualifying, but no one thought much of it. The surprise came though, just before the race when he joined the small crowd of drivers, revealing his intention to race for the first time since July.Mishi Rossini was driving the MR Blitz, his newly built and released racing car. This was the first time the Blitz had competed in an open-formula race, just an hour or so after it made its race debut in its own one-make race.Kandy Tomorrow, the firm favourite for the race, was driving her Midnight Thunder race car, the same car in which she had been rewriting the record book, taking a track lap record of 14.504 seconds, taking a huge 1.8 seconds off of the record recently set by Peldon Cordeaux.Two of the proven MG cars built by Peldon Cordeaux were in the field, driven by Cid Ducatillon and Suzy Cuddihy: the newly recruited Pixel Props driver, and the only PP team member in the race. Ducatillon had never raced at MyControl Speedway before, and was somewhat of an unknown quantity. Suzy, on the other hand, has a good best lap at the track and although inexperienced at MyControl, is a regular in many races in Second Life. Many rated her as most likely for second place.The field was completed by rookie Lorenita DeCuir. She was an unusual sight on the track in her pink freebie car, the Sunday Drive. She put in a valiant qualification, ahead of Cid Ducatillon in his MG.The unexpected began right away, as soon as the race started. Due to a technical problem, Kandy Tomorrow's starting block could not be removed, rendering her completely still as the race began and the other drivers weaved around her going into the first corner. Mishi Rossini had a quick start, swerving around Kandy and taking the lead at turn one. This lead didn't last long, though, as Suzy was only one second behind him as they crossed the line for the first time, and snatching the lead early on lap two.Kandy had got going, and set about playing catch-up, fighting through the slower cars. She passed Mishi into second place on lap 3, and within two laps she had taken the lead, where she would stay for the rest of the race.Suzy's inexperience at MyControl became apparent as she began to miss checkpoints, and laps. She was clearly faster than Mishi (her average lap time was approximately 5 seconds quicker), but her inconsistency saw her fall behind Mishi on lap 5, from which point she never recovered. This didn't mean a lack of action, though, as she pushed hard to retake the RedLine driver, with some threatening spurts and some door-to-door battles between the two, occasionally lasting half a lap!Lorenita exceeded the expectations of many by beating Cid Ducatillon for 4th place, with a solid drive in her bright pink car. It was a good result, and showed that sufficient driving can sometimes allow a freebie car to beat real racing machines. Having said that, Cid did have a frustrating drive with an average lap time of over a minute.Mishi's brief return to competetive racing resulted in an unexpected second place finish, securing a RedLine Racing 1-2 finish, as Kandy lifted the gold trophy. This was also a pleasant surprise in that the MR Blitz finished ahead of the two MGs in the field. Suzy Cuddihy, representing Pixel Props, came in third with Lorenita DeCuir and Cid Ducatillon occupying 4th and 5th respectively.The number of spectators was good, and we thank those who attended to watch the action. It was also good to see some shouts of encouragement and advice from the audience!The drivers shared the prize money, totaling L$4000. Please visit our race sponsors http://www.plusx.deThe final results:1: Kandy Tomorrow - Midnight Thunder - 50 laps 2: Mishi Rossini - MR Blitz - 43 laps 3: Suzy Cuddihy - MG Roadster - 38 laps 4: Lorenita DeCuir - Sunday Drive - 31 laps 5: Cid Ducatillon - MG Roadster - 21 lapsIf you are interested in taking a look at the statistics of the race, visit our website at http://www.speedway.mycontrol.deMyControl Speedway www.slurl.com/secondlife/Magrathea/246/54/701/ Group: MyControl Speedway speedway.mycontrol.de ViSdP: MyControl GmbH & Co. KG Sommerbergstraße 14 34123 Kassel, Germany 0800-MYCONTROLMyControl Speedway is a motorsport race track in Second Life. Between the offical racing events the track is open for public use, drivers' trainings and for building and improving SL vehicles.