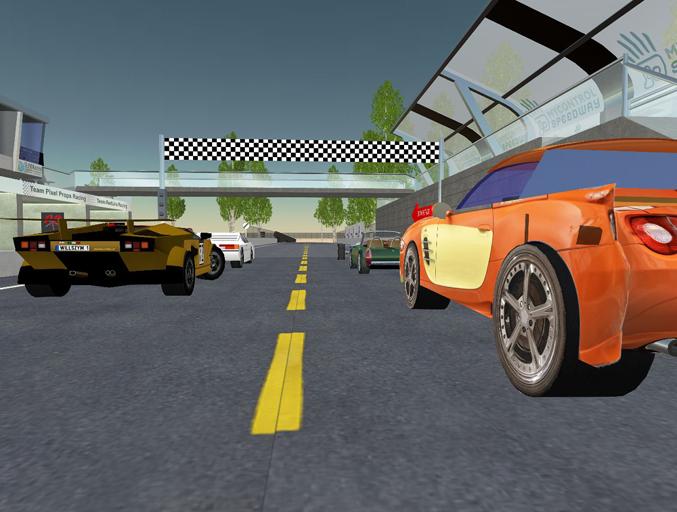 The next MyControl Speedway official race is now scheduled for Thursday 25th October, with qualifying starting at 12PM PDT, with the race beginning around 1:15PM. There’s a lot going on this time, and it’ll be a great race to see. Team Pixel Props didn’t succeed in their drive to oust Team RedLine Racing from the number one spot they’ve been occupying since the start of the official races last time out, so they’re now pulling out all the stops. Peldon Cordeaux has been attacking the track and his car in order to shave time off of his personal best, and it has paid off. He has taken the lap record with a time of 0:16.377. He looks more likely than ever to topple the mighty Yetrates Bates. Now, to bolster their push, they've recruited new talent in Suzy Cuddihy, who is already in the high ranks of lap times, but inexperienced in race conditions. How will she fare? With a new driver and a new lap record, Pixel Props look in a better position than ever to topple the mighty Yetrates Bates. Of course, Yetrates will be the toughest of nuts to crack, as she remains undefeated going into the race. Fellow RedLine driver Kandy Tomorrow has also been working on her car to squeeze everything she can out of it, so RedLine are raising the pressure too. A tight contest is assured. We were expecting to see a new team make a fresh rivalry against the titans of MyControl, a new team led by extraxy Yoshikawa, but it seems their challenge has fallen at the first hurdle as they will likely now not make it, and it seems unlikely their time as a team will never get into full swing. The prize money will total L$4000, kindly supplied by race sponsors plusx.de. The proceedings will be a little different this time around, as the official race is joined by its first support race: a one-make race for the newly released MR Blitz. It is a preview of what to expect in the planned Blitz Cup series, and in this one-off race anyone can turn up and compete in a temporary MR Blitz, to get a feel for the car and the competition. This will give anyone the chance to compete with no disadvantages from their vehicle. Just turn up to race! The Blitz race will start at 11:30AM PDT, and those who wish to enter can try out the Blitz in free practice beforehand with the open formula drivers. The races at MyControl seem to get more exciting each time, and this is set to be no exception. It’s not a race you want to miss! Please visit our sponsors at http://www.plusx.de. MyControl Speedway www.slurl.com/secondlife/Magrathea/246/54/701/ Group: MyControl Speedway speedway.mycontrol.de ViSdP: MyControl GmbH & Co. KG Sommerbergstraße 14 34123 Kassel, Germany 0800-MYCONTROL MyControl Speedway is a motorsport race track in Second Life. Between the offical racing events the track is open for public use, drivers' trainings and for building and improving SL vehicles.

10-13-2020 | Leisure, Entertainment, Miscel …
Dreamstart Music & Management
Blitz Union has started the Revolution
We all know the discussions around fake news, and sometimes it is really hard to judge what is true and what not. The story of Czech band Blitz Union, starting to release their upcoming EP on October 16th 2020, truly sounds unbelievable. In short: the singer of the band got hit by lightning, saw the future and how bad it will get. In order to get the message - it
01-25-2019 | Advertising, Media Consulting, …
Research Trades
Global American Football Gloves Market | Top Players Optimum, BLITZ, Razor, Velo …
This report studies the global American Football Gloves market status and forecast, categorizes the global American Football Gloves market size (value & volume) by manufacturers, type, application, and region. This report focuses on the top manufacturers in North America, Europe, Japan, China and other regions (India, Southeast Asia, Central & South America, and Middle East & Africa). Request For Sample @ https://www.researchtrades.com/request-sample/1640144 The global American Football Gloves market is valued at million
09-21-2018 | Sports
Global Rugby Gloves Market
Global Rugby Gloves Market 2018 By Key Players : Optimum, BLITZ, Razor, Velocity …
Qyresearchreports include new market research report "Global Rugby Gloves Market Research Report 2018" to its huge collection of research reports. In this report,the global Rugby Gloves market is valued at USD XX million in 2017 and is expected to reach USD XX million by the end of 2025,growing at a CAGR of XX% between 2017 and 2025. The report on the global Rugby Gloves market strives to make a comprehensive assessment of
04-06-2018 | Business, Economy, Finances, B …
Market.Biz
Global American Football Gear Market 2018- Gilbert International, Optimum, BLITZ …
The Global American Football Gear Industry 2018 Market Research Report is a professional and in-depth study on the current state of the American Football Gear industry. Firstly, American Football Gear Market report provides a basic overview of the American Football Gear industry including definitions, classifications, applications and American Football Gear industry chain structure. Global American Football Gear Market analysis is provided for the international market including development history, American Football Gear
09-10-2013 | Arts & Culture
Torquere Press
Torquere Press to donate proceeds from Charity Sip Blitz to LGBT nonprofit
Every year, the authors at Torquere Press come together to write for a reason. Torquere’s Annual Charity Sip Blitz gives authors an opportunity to make a difference and donate their time and money to a noble cause. Authors donate all proceeds to a chosen organization, and Torquere matches those donations 100 percent. In previous years, the Charity Sip Blitz has raised $5,000 for Lambda Legal, over $3,000 for the Matthew
03-22-2012 | IT, New Media & Software
cloudControl
cloudControl Selects Blitz from Mu Dynamics to Test and Validate Cloud Infrastru …
Blitz Seamlessly Integrates with cloudControl – Giving Customers the Ability to Load Test Production Web Application Performance in the Cloud Sunnyvale, California — March 21, 2012 — Mu Dynamics, Inc. (www.mudynamics.com), the leader in validating and testing applications and application-aware networks, and cloudControl (www.cloudcontrol.com), a leading Platform-as-a-Service (PaaS) vendor, today announced that the two companies have partnered to make Mu Dynamics Blitz (http://blitz.io) available to all cloudControl customers. By partnering with
Comments about openPR
I can't but agree to the positive statements about your portal: easy to use, clear layout, very good search function, and quick editing!
Jens O'Brien, Borgmeier Media Communication