Second Life: "It's a bad day for British motorsport" 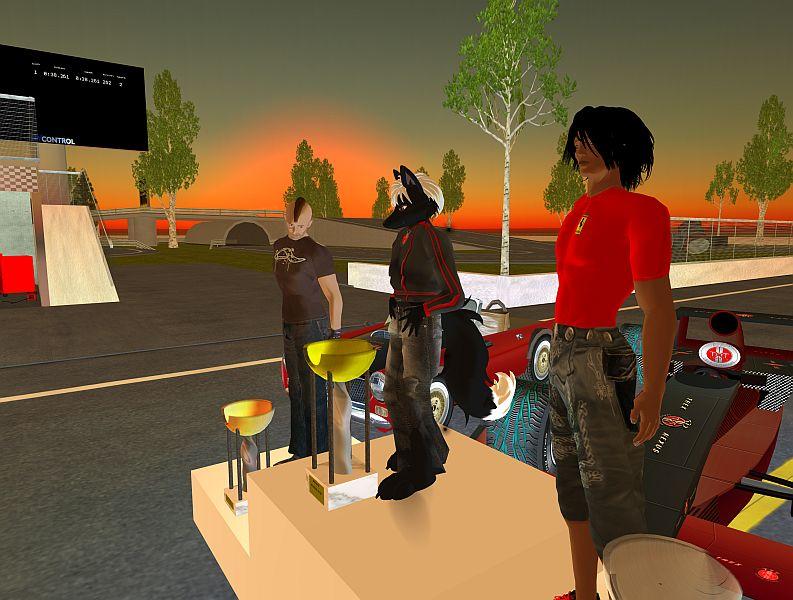 The outcome of yesterday's 2nd Official Race on MyControl Speedway, Magrathea, Second Life, got disfavored by heavy showers of lag and various personal indispositions among the racing teams.Starting with a clean track during Free Training Session, that gave drivers the opportunity to go very fast laps, things seemed just perfect.The following Qualifying Session experienced just a single sim crash, giving no forboding on the coming events.Qualifying results: P1 Wilton Beaumont - best lap: 19.001 P2 Peldon Cordeaux - best lap: 20.564 P3 Yetrates Bates - best lap: 20.788 P4 kami22 Beck - best lap: 27.747 P5 Kosak Beck - best lap: 32.930 P6 Snow Bristol - best lap: 41.576 not qualified: P7 Penguinfan Beck - best lap: 43.901Everything was set up for a 50 laps race, promising a total prize money of L$4,000 to the drivers, graciously sponsored by PLUSX.de.After the Qualifying Session the sim was intendendly restarted. This was when the netweather gods decided to spill their wrath on the drivers and shake the ports of their heavenly routers.After the restart, 2 drivers were lost. Kosak Beck, Germany, and all-time-champion Yetrates Bates, Holland, could not take their places on the starting grid. For them came Penguinfan Beck (P5) and Dying Vilotta (P6).The race was started with an 11 minute delay. Due to heavy network lag, Vilotta and Penguinfan Beck both hat to retired after their first lap, having no lag save setup up their sleeves.Bristol was hit by the lag after 5 laps and also retired.The three remaining contestants drove merely against the timer.Wilton Beaumont (Team 777 League Racers) gave another excelling example of perfect SL racing, completing his 50 race laps in 23:47 minutes, achieving the race's best lap in lap 10 with stunning 18.6357 seconds.kami22 Beck showed a constant and discrete performance, going constant lap times, completely unimpressed by the bad lag, proving his solid racing qualities. He took P2 in the first lap from Cordeaux and defended the position till the end of the race, with Cordeaux closing up several times to a distance of some seconds. Personal best lap: 27.198 seconds.Peldon Cordeaux (Team Pixel Props), having the power of the second fastest car on the grid and going a best lap of 22.639 seconds, was badly shaken by lag and technical collapses. Loosing one lap after the other, he changed to the T-car during the race, but could not get out of the trouble. In his last lap technical problems got worse, his car caught fire, leaving behind a depressingly beaten Cordeaux. After the race he stated "its a bad day for british motorsport".Rumors, that Cordeaux himself, in a neroic outburst, set his car on fire on pure purpose , uttering a desperatly sad "I hate you, car" could not be approved by the officials.Official Race Results: P1 Wilton Beaumont - 23:47 minutes P2 kami22 Beck - 38 laps P3 Peldon Cordeaux - 34 laps More information: http://speedway.mycontrol.deLinks: http://www.plusx.de http://www.secondlife.comMyControl Speedway secondlife://Magrathea/246/54/701 Group: MyControl Speedway http://speedway.mycontrol.de ViSdP: MyControl GmbH & Co. KG Sommerbergstraße 14 34123 Kassel, Germany 0800-MYCONTROLMyControl Speedway is a motorsport race track in Second Life. Between the offical racing events the track is open for public use, drivers' trainings and for building and improving SL vehicles.

You can edit or delete your press release Second Life: "It's a bad day for British motorsport" here