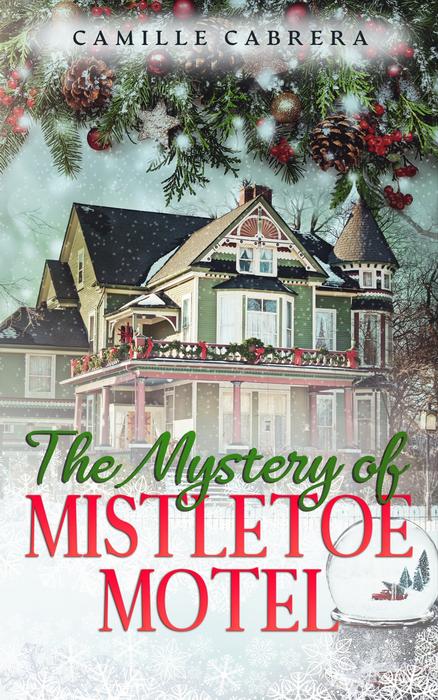 Los Angeles author and #entrepreneur# Camille Cabrera releases her first Christmas novel, The Mystery of Mistletoe Motel, which follows two intrepid sisters as they endeavor to save the family business after possibly enlisting the help of the paranormal.[Los Angeles, CA, November 24] The latest release from author Camille Cabrera, The Mystery of Mistletoe Motel, documents the chilling story of Lacy Pondwater and her younger sister, Stacy, as they struggle to salvage the family business in the wake of a shared tragedy. Lacy tells one little lie that quickly snowballs out of control. Soon, eager ghost hunters and fans of the unknown flock to the motel and Lacy can only hope that her online mishaps can save the holiday season. Camille Cabrera’s engaging Christmas tale follows two sisters down on their luck. Their recently inherited motel has been in desperate need of renovation since the ‘80s, and is woefully overlooked by travelers thanks to GPS maps routing away potential customers. On a constantly shrinking shoestring budget, Lacy has maxed out every credit card and is at the end of her rope. Desperate, Lacy embellishes the description of the Mistletoe Motel online to include Victorian era haunts and the occasional ghost encounter. A question slowly circles around the back of Lacy’s mind: did she inadvertently invite a haunting to Mistletoe Motel, or are her eager guests merely manifesting their own adventures? Of course, white lies always come back to bite, and when a ghost hunting television show asks to film at the motel, the sisters reluctantly agree. It will take a Christmas miracle to save the Mistletoe Motel from bankruptcy and rescue Lacy from a life of fraud. Californian native, Camille Cabrera is the author of The Rule of Three and Catalina’s Tide. She is the upcoming editor-in-chief of LAgendary Magazine, slated for release in 2023. Cabrera maintains an active writing career, exploring both urban Los Angeles and its surrounding National Forests for creative inspiration. Cabrera writes, “The curved roof came into view as I carefully walked up the icy stone path. Its shingles were missing in several places, but the structure remained regal if not still imposing. The bones of the building had lasted multiple centuries and still had the potential to span at least another 100 years if properly cared for. My eyes lovingly gazed over the once white paint that had slowly turned to a dull grey after years of neglect.”For more information, please contact: camillecabrerapr@gmail.com https://www.camillecabrera.comReaders who wish to purchase the enthralling The Mystery of Mistletoe Motel can do so at bookstores worldwide, or online with retailers such as Kobo, Google Play, Amazon, Barnes & Noble, Apple iBooks, and more.

You can edit or delete your press release Camille Cabrera Releases Her New Cozy Mystery Christmas novel, The Mystery of Mistletoe Motel here

11-26-2021 | Arts & Culture
Doulitsa Global media
T. Ledger Delivers Superb ‘8 Bit’ Single, Matching Video
Music artist nails vocalist bit pop-ish track from independent album FFO: 8-Bit Pop, Bit Pop, Electronic Uninterrupted vocals presented over a computerized music mix provides a singular listening experience during “8 Bit,” by T. Ledger ( https://open.spotify.com/album/2sAsDFcdABFVAGbqryNiZ2 ) . From the album Sue Me I Want To Die , the accompanying video for “8 Bit” evokes equal admiration and curiosity. Possessing just the right human touch and programmable appeal adds up to
11-22-2021 | Arts & Culture
Doulitsa Global media
Ontario Phoenix Also Known as Phoenix Balmain Is a Rapper on the Rise From Des M …
LA, California, 17th Nov 2021, ZEXPRWIRE, Ontario Phoenix is also known as Phoenix Balmain has lived in many places such as Los Angeles California, Las Vegas Nevada, Phoenix Arizona with his hometown being Des Moines Iowa also where he currently resides. He is born from the Clark family a very well known family for crime, drugs and murder in Des Moines Iowa. His great uncle Alf Freddie Clark who is currently
11-17-2021 | Arts & Culture
Doulitsa Global media
Trevah Speaks on Making Through Hard Times in Latest Single
Ontario, Canada, 16th Nov 2021, After reminiscing on a turbulent come up with his previous single, “Ain’t Going Back” Trevah returns with a new anthem for those doing what it takes to make it through hard times. Produced by Jd Krazy , Trevah touch’s on the common theme in hip hop doing what it takes to obtain status , power and material success. It’s something millions of people around the
11-12-2021 | Fashion, Lifestyle, Trends
Doulitsa Global media
One Simple Way To Maintain A Flawless Skin
With regards to the issue of our skin, all of us wants only to achieve that flawlessness – 'immaculate skin'. This, without a doubt, has been a main pressing issue for a higher level of individuals over the long haul. All the more along these lines, It isn't restricted to a specific race. Everybody needs to shield themselves from getting impacted by Ultraviolet (UV) radiation, electromagnetic radiation that begins from