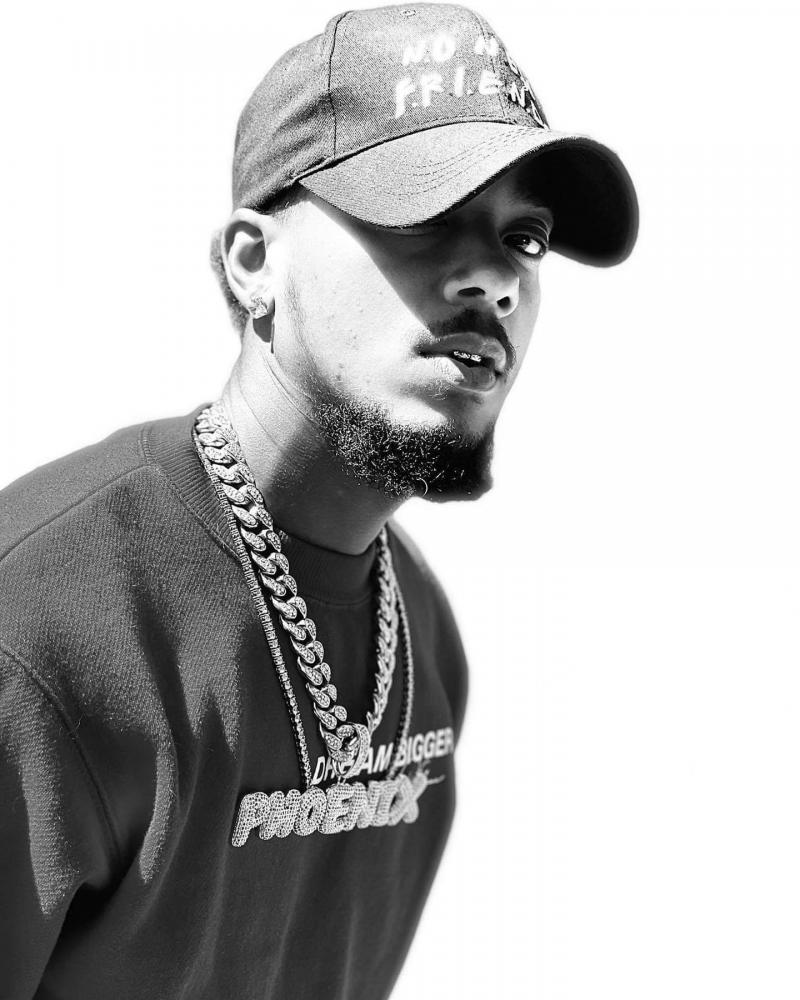 LA, California, 17th Nov 2021, ZEXPRWIRE, Ontario Phoenix is also known as Phoenix Balmain has lived in many places such as Los Angeles California, Las Vegas Nevada, Phoenix Arizona with his hometown being Des Moines Iowa also where he currently resides.He is born from the Clark family a very well known family for crime, drugs and murder in Des Moines Iowa. His great uncle Alf Freddie Clark who is currently serving life with no parole wrote a book about his family called “Satans Mask” which has sold over millions of dollars in copies! If you want to learn more about him and his family I would definitely take a dive into that book!Artist Who Inspired Him are Biggie Smalls, Nipsey Hussle, Drake, Bryson Tiller, Gucci Mane, J Cole, Hopsin, Durk & many more! His music label Show No Fear Entertainment was LLCd in 2014! He also has major features with K Camp, Kirko Bangz & new one recently with Mak Sauce called “RedRoad (FinBall) also featured on his newest album “Think It’s A Game” now available on all music platforms! He also has a song on the album called “I Pray” that is definitely dope radio play!He’s opened up for Twisted Insane, Da Mafia Six, Twista, Lil Wyte and more as well! With his music in rotation on a few radio stations in states such as Chicago, Atlanta, Dallas and NYC and some of his music being played in different clubs.. There is now word that he is planning a mini tour for 2022!Ontario Phoenix is much more than an music artist or “rapper” though. He has multiple clothing lines out such as Money Krazy Clothing, Guap Loco Clothing, Join The Wave Or Drown In It Clothing, his label Show No Fear Entertainment (SNF) Clothing and we’ve heard he has 4 new clothing lines currently in the works!He also is a talented tattoo artist! He started free hand tatting in 2012. Since then he has worked his way up and perfected his craft! He also has a Facebook tattoo business page called Fearless Tattoos! That is where he has photos of work on his past clients.But he doesn’t stop there! He also is a boxer and does side mechanic work for extra money. Ontario Phoenix is a man of many talents and is a very gifted individual!Ontario Phoenix aka Phoenix Balmain is also known in the LBGT community and competes and walks in ballroom. He is apart of The Haus Of Balmain, who was recently on the show Legendary aired on HBO Max! With Megan Thee Stallion as one of the judges. Season 1 The Haus Of Balmain won $100,000!!Ontario Phoenix travels to different states to compete in balls against others. His category is transman realness! YES he is transman, and his goal is to be the first transman to blow up in the music industry! He is definitely next up, from his versatile music, variety of clothing lines, many talents & currently going viral on Spotify! I promise you want to check him out now and be one of the first to become a fan of this rising star!Artist Name-Ontario Phoenix aka Phoenix BalmainPhone-1 (517) 213-8289https://www.facebook.com/ontariophoenix/https://open.spotify.com/artist/7nw2Qgl4CIWTPYN8oNhuQK?si=EAjxclZWQweqiSECdgMRNQhttps://open.spotify.com/album/4tN3b6Db8nTH6vScSzHeyn?si=Ps0ETHAgQg6Sr5Y9XRhNdghttps://instagram.com/ontariophoenix?utm_medium=copy_link

05-27-2022 | Arts & Culture
Doulitsa Global media
Winning author Michael Mathiesen has today released his latest book - 'My Cosmic …
It's not only Science Fiction any more as the events in this book are cloned from the future News stories around the world. Santa Cruz, CA, 5/26/2022 . Michael Mathiesen.com As of the publishing of this book, I have all the information regarding the 2nd Big Bang exclusively inside of 'My Cosmic Brain'. Until we get it to go viral and then into YOUR Cosmic Brain, all may be
11-26-2021 | Arts & Culture
Doulitsa Global media
T. Ledger Delivers Superb ‘8 Bit’ Single, Matching Video
Music artist nails vocalist bit pop-ish track from independent album FFO: 8-Bit Pop, Bit Pop, Electronic Uninterrupted vocals presented over a computerized music mix provides a singular listening experience during “8 Bit,” by T. Ledger ( https://open.spotify.com/album/2sAsDFcdABFVAGbqryNiZ2 ) . From the album Sue Me I Want To Die , the accompanying video for “8 Bit” evokes equal admiration and curiosity. Possessing just the right human touch and programmable appeal adds up to
11-24-2021 | Arts & Culture
Doulitsa Global media
Camille Cabrera Releases Her New Cozy Mystery Christmas novel, The Mystery of Mi …
Los Angeles author and #entrepreneur# Camille Cabrera releases her first Christmas novel, The Mystery of Mistletoe Motel, which follows two intrepid sisters as they endeavor to save the family business after possibly enlisting the help of the paranormal. [Los Angeles, CA, November 24] The latest release from author Camille Cabrera, The Mystery of Mistletoe Motel, documents the chilling story of Lacy Pondwater and her younger sister, Stacy, as they struggle
11-17-2021 | Arts & Culture
Doulitsa Global media
Trevah Speaks on Making Through Hard Times in Latest Single
Ontario, Canada, 16th Nov 2021, After reminiscing on a turbulent come up with his previous single, “Ain’t Going Back” Trevah returns with a new anthem for those doing what it takes to make it through hard times. Produced by Jd Krazy , Trevah touch’s on the common theme in hip hop doing what it takes to obtain status , power and material success. It’s something millions of people around the

04-27-2016 | Leisure, Entertainment, Miscel …
Aurorasa Coaching
Aurorasa Coaching Launches Project Phoenix Affiliate Program
AURORASA Coaching Affiliate, Project Phoenix Emotional Intelligence Training, Extends Marketing Opportunities for Third Parties Chicago, Illinois — April 28, 2016 — Aurorasa Coaching today launched the Project Phoenix Affiliate program, making it the first complete EQ boosting program. Project Phoenix is available in 2 variants - fully digital and with personal coaching. Included is everything a person needs to successfully raise their EQ. “The program is a clear win-win for
04-12-2016 | Science & Education
aurorasa
Project Phoenix - Come Back Stronger!
WHEN Aurorasa Sima an acclaimed Empowermentalist, Coach and the prodigy behind Aurorasa Coaching realized that about 90% of her clients are struggling with the same issue she knew it was time to create Project Phoenix. Everyone, no matter how successful they are has experienced some sort of painful setbacks and failure in their life. Whether it is a job loss, abusive relationship, failed business, divorce - these negative experiences
10-19-2011 | Energy & Environment
Phoenix Hydroponics
Phoenix Hydroponics Offers Free Consultation
Phoenix, Arizona – Phoenix Hydroponics, a new business in the Phoenix area, is offering free consultations for potential patrons interested in the world of hydroponics. The consultation includes detailed walkthroughs of every procedure integral to the operation of every hydroponic operation. Topics such as temperature control, pH balance, plant nutrition, sunlight manipulation and potential warning signs are all covered in detail. The consultation provides a framework of knowledge that can
03-14-2011 | Health & Medicine
IAEDP
A Picture- Perfect Week in Phoenix
PHOENIX (March 14, 2011) – A goal was met and a record set when over 450 participants attended the 2011 International Association of Eating Disorder Professionals (iaedp) Symposium last week in Phoenix. While the picturesque weather may have played a role in bringing snowbirds down to the desert, it’s ultimately the top-notch programming to thank for attracting nearly 500 in-person participants, the most ever in the symposium’s 25-year history. Even
10-03-2010 | Tourism, Cars, Traffic
Hojoairport.com
Luxury Hotel in Downtown Phoenix
Howard Johnson Hotel promises to be a place where you can regale in the modern comforts but with an old-world charm. It has a style of bed which reminds you of south-west furniture. The breakfast inns are the same. Such a luxury accommodation in Phoenix is very convenient for the visitors as Howard Johnson is an airport hotel. They can drop right into luxury after landing at the airport. Each
07-31-2008 | IT, New Media & Software
Stellar Information Systems Ltd
Stellar Phoenix iPod Recovery V1.2
Stellar Information Systems Ltd., a company with the terrific track record in providing data recovery software, announced quick availability of the Stellar Phoenix iPod Recovery V1.2 for Macintosh. Stellar Phoenix iPod Recovery is an exclusive solution for absolute data recovery from the most popular portable media player- Apple iPod. This iPod recovery software is integrated with powerful scanning algorithms to perform complete extraction of your data from iPod. The newer
Comments about openPR
Your portal is fast, simple, and easy to use. Others may have more functions but they also demand more editing time, you have to preformat the text in order to achieve a good result etc. I think openPR is really fantastic!
Andreas Knepper, wallmedien AG