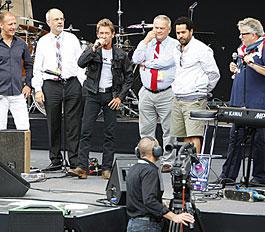 Eichsfeld Festival Attracts 25,000 Music Fans to Downtown Duderstadt "Tonight is going to rock!" It was with these words that initiators Professor Hans Georg Näder and Peter Maffay opened the 2012 Eichsfeld Festival this past Saturday. Around 25,000 music fans followed the invitation to experience top-class live performances in the Marktstraße of Duderstadt that day. Peter Maffay, Ich + Ich and four regional special guests did more than just wow the audience with their benefit concert. Professor Näder and Peter Maffay collected donations of around EUR 155,000 for their joint "Safe Zones for Children" child welfare project. The gigantic music arena in the downtown area already began filling with numerous spectators around noon. At 3:00 pm the festival community listened intently to the bells of St. Cyriakus Church as they rang in the event. When Peter Maffay, Adel Tawil and Ottobock CEO Professor Näder took the stage, they were met by thunderous applause from all directions. Their opening speech launched an unforgettable music event. Nine hours of pure emotion The concert was kicked off by the youngsters HansMs. With outstanding interpretations of current rock songs and many of their own acoustic pieces, the trio enchanted the crowd. The Birkungen cover band Princess Jo, familiar from the 2009 Eichsfeld Festival, lured more and more spectators onto the Marktstraße with classic rock such as "Private Dancer" and "What's a Woman". The Maffay Support Project also scored points with classics as well as current hits. 15 musicians from popular regional bands got together as local heroes exclusively for this benefit concert. Hillbilly Schmitt and the Bluehoon Boys proved that the weather cannot dampen high spirits with rockabilly in the rain. In bell-bottoms and Elvis quiff, the four musicians revived popular songs by Buddy Holly, Jerry Lee Lewis and Elvis Presley. At 8:00 pm on the dot, euphoria spread in an instant from St. Cyriakus to St. Servatius Church. Thousands of fans welcomed the pop music project Ich + Ich to the stage. During the 90-minute performance, lead singer Adel Tawil proved with his show that he is "from the same star" as his audience. He presented hits such as "Stark", "So soll es bleiben" and "Pflaster" in close contact with fans. A spectacular light show lit up the entire downtown area like "the sun at night" when darkness fell. Thunder rolled across the Marktstraße and once again attracted attention to the stage. Longtime friends Professor Näder and Peter Maffay rolled into the limelight on their Harleys – kicking off the finest German rock. Stirring rock for a good cause A journey through 30 years of rock history followed until midnight. Peter Maffay and band opened their stupendous show with "Ich kann wenn ich will". A colourful mix of rocking beats and powerful ballads invited the audience to clap, dance and sing along. Sparklers, glow sticks and lighters created the right ambiance. Thanks to the willingness of his audience to make donations, the show wasn't over for Maffay until long after the official concert time. Proceeds of the SMS fundraising campaign for the child welfare project "Safe Zones for Children" amounted to around EUR 10,000. Ticket sales yielded another EUR 145,000 earmarked for therapy facilities for traumatised children in Duderstadt. "With our safe zones, we want to build bridges for children so they can find their way back to normality," is how Maffay describes his joint intention with Professor Näder. This also served as a segue for his next song "Über sieben Brücken" (Over Seven Bridges) to thank his audience – and goose bumps overcame the old city. As a reminder of the poignant moments of the music event, a slideshow with photos of all the high points is available under www.eichsfeld-festival.de. Ottobock - Technology for People Otto Bock HealthCare helps people maintain or regain their freedom of movement with innovative products. Founded in Berlin back in 1919, the medical technology company has become a global market leader in the field of prosthetics. Other business units include orthotics, Mobility Solutions with wheelchairs, seating systems and child rehabilitation devices as well as, since 2006, neurostimulation. The activities of the global company with sales and service locations in 44 countries are coordinated from the head office in Duderstadt, South Lower Saxony. Professor Hans Georg Näder, the grandson of company founder Otto Bock, took over the management of the family company from his father Dr. Max Näder in 1990 and carried on as the third-generation CEO ever since. Further information: www.ottobock.com Karsten Ley, Director Corporate Communication Otto Bock HealthCare GmbH, Max-Näder-Str. 15, 37115 Duderstadt Phone: +49 (0)5527 848-3036, Fax: +49 (0)5527 848-3360 E-mail: karsten.ley@ottobock.de, Internet: www.ottobock.com

You can edit or delete your press release EUR 155,000 for Safe Zones Project here

09-30-2013 | Health & Medicine
Otto Bock HealthCare GmbH
World Record: 1002 Kilometres Nonstop
Manfred Putz (Ottobock Handbike Team): "Anything is possible if you just do it" Wheelchair driver and extreme athlete Manfred Putz now (since early on September 22, 2013) holds the world record: He rode a handbike 1002 kilometres since starting on Friday morning at 10 o'clock, with only two one-hour breaks to eat. To put this incredible performance into perspective, remember that a marathon of 42.195 kilometres is considered a long distance.
04-10-2013 | Health & Medicine
Otto Bock HealthCare GmbH
red dot awards for Ottobock
Awards for three product designs Ottobock impressed the 37 experts of the jury at this year's "red dot award: product design 2013" with its sport prosthesis, 1C63 Triton Low Profile prosthetic foot and Patella Pro knee orthosis. Among a total of 4,662 entries, these medical technical devices were selected both for their innovative concept and their high design quality. The award ceremony for the internationally recognised seal of quality will be
03-18-2013 | Health & Medicine
Otto Bock HealthCare GmbH
Ottobock expands its production and logistics site in Duderstadt
Investments of 35 million euros from 2013 to 2015 The family-owned business based in Duderstadt, Lower Saxony (Germany), is planning extensive expansion of its production in the areas of Prosthetic Feet and Socket Technologies and of the central logistics hub for its 49 foreign branches located throughout the world. The German global market leader for technical orthopaedics will invest 35 million euros from 2013 to 2015 in around 20,000 square metres of
03-04-2013 | Health & Medicine
Otto Bock HealthCare GmbH
Ottobock receives four awards at once
Company receives iF design awards Three Ottobock products received an iF product design award 2013, namely the knee orthosis Patella Pro, the Michelangelo Hand and the back orthosis line Soft Backs. In addition to that, the jury awarded the medical technology company an iF communication design award. Ottobock employees accepted the awards on Friday, 22 February 2013 at the BMW Welt in Munich, Germany, which is where the