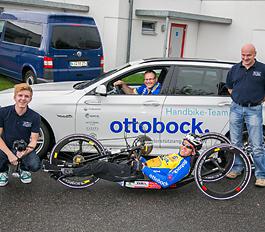 Manfred Putz (Ottobock Handbike Team): "Anything is possible if you just do it"Wheelchair driver and extreme athlete Manfred Putz now (since early on September 22, 2013) holds the world record: He rode a handbike 1002 kilometres since starting on Friday morning at 10 o'clock, with only two one-hour breaks to eat. To put this incredible performance into perspective, remember that a marathon of 42.195 kilometres is considered a long distance. The 1002 kilometres are equivalent to about 24 consecutive marathons. He drove this distance at an average speed of nearly 24 km/h.Some 42 hours on a handbike, through day and night, on a 98-kilometre long circuit along the Neckar River. His fans who accompanied the world record online at Facebook created some diversion. "I was updated on your postings, which helped me reach my goal. Working as a team, we managed to get the message out." "Mandi", as he is known in the cycling world, thanked his fans for their support even before finishing. In addition to the encouragement from the Internet, Frank Wierth from Neckargemünd and a few drivers from the Ottobock handbike team provided on-site support. Several people accompanied Putz on at least some of the 98-kilometre rounds: Tobias Knecht and Olaf Heine on Friday, Ralf Weisang through the night until Saturday morning, Torsten Purschke after around 700 kilometres, and Frank Wierth and Tobias Knecht once again up to the finish line. Michael Biermann took care of organisation, for example digital communications and support for the photographer and cameraman. The start was at the Manfred Sauer Foundation in Lobbach, which is very familiar to the Ottobock handbike team. The handbikers hold sports courses at this facility for paraplegics for two weeks every year to draw attention to the possibilities for mobility despite disability. "One doesn't have to start with 1000 kilometres," says Michael Biermann. "Even the first ten are unforgettable."For Putz, it was about self-awareness and pushing limits, in other words, extreme sport. He wanted to make the Guinness Book of Records by considerably surpassing the old record, which Jens Hoffmann had pushed up to 700 kilometres in August 2012. But he also wanted to create awareness for his message: "Anything is possible if you just do it!" Another objective of the world record run was to encourage others.Manfred Putz has been a paraplegic since a traffic accident in 1996. Since then, the 43-year-old has achieved a lot as a professional athlete. The handbiker became European Champion in 2006 and World Champion in 2007 in time trials. The overall World Cup victory was followed by fourth place at the 2008 Paralympic Games in Beijing. He has collected 15 titles as Austrian State Champion over all those years. He once described what drives him, "When I ride my handbike, I forget about my pain and enter another world, a world full of freedom, enjoyment and passion!"He prepared a long time for the world record, including at a training camp in South Africa when wintry conditions here prevented regular road training. Despite his preparations, during his world record run, sometimes his hands hurt him, sometimes his upper arms. He had different kinds of problems with the rain on Friday morning, a flat tyre, and loss of the handbike light during the night, which fortunately was quickly repaired. "I'm not getting off until I have the 1000 kilometres, you'll have to fight to get me off the bike," he shared his competitive spirit with the Facebook community. He reached the finish line "at his physical limits, but infinitely happy." And the next project? Manfred Putz: "For 2014, we're thinking of the 24-hour world record. And with Thomas Frühwirth in the "Ultra Handbike Team" we are thinking about the Race Across America ...." That would be 4800 kilometres from the west to the east coast.For people with limited mobility, Ottobock develops medical technology products and fitting concepts in the fields of Prosthetics, Orthotics, Mobility Solutions (wheelchairs, rehabilitation aids), Neurorehabilitation and MedicalCare. Subsidiaries in 49 countries offer quality "Made in Germany" worldwide and employ more than 5,000 people. A family-managed company since its founding in 1919, Ottobock has also been supporting the Paralympic Games with its technical expertise since 1988. Further information: www.ottobock-group.comKarsten Ley Director of Corporate Communications Otto Bock HealthCare GmbH, Max-Näder-Str. 15, 37115 Duderstadt, Germany Phone: +49 (0) 5527 848-3036, Fax: +49 (0) 5527 848-3360 E-mail: karsten.ley@ottobock.de www.ottobock-group.com

You can edit or delete your press release World Record: 1002 Kilometres Nonstop here

04-10-2013 | Health & Medicine
Otto Bock HealthCare GmbH
red dot awards for Ottobock
Awards for three product designs Ottobock impressed the 37 experts of the jury at this year's "red dot award: product design 2013" with its sport prosthesis, 1C63 Triton Low Profile prosthetic foot and Patella Pro knee orthosis. Among a total of 4,662 entries, these medical technical devices were selected both for their innovative concept and their high design quality. The award ceremony for the internationally recognised seal of quality will be
03-18-2013 | Health & Medicine
Otto Bock HealthCare GmbH
Ottobock expands its production and logistics site in Duderstadt
Investments of 35 million euros from 2013 to 2015 The family-owned business based in Duderstadt, Lower Saxony (Germany), is planning extensive expansion of its production in the areas of Prosthetic Feet and Socket Technologies and of the central logistics hub for its 49 foreign branches located throughout the world. The German global market leader for technical orthopaedics will invest 35 million euros from 2013 to 2015 in around 20,000 square metres of
03-04-2013 | Health & Medicine
Otto Bock HealthCare GmbH
Ottobock receives four awards at once
Company receives iF design awards Three Ottobock products received an iF product design award 2013, namely the knee orthosis Patella Pro, the Michelangelo Hand and the back orthosis line Soft Backs. In addition to that, the jury awarded the medical technology company an iF communication design award. Ottobock employees accepted the awards on Friday, 22 February 2013 at the BMW Welt in Munich, Germany, which is where the
02-20-2013 | Health & Medicine
Otto Bock HealthCare GmbH
Ottobock reveals strong ties to Asia
ISPO world congress: research project received award for best presentation Ottobock presented itself at this year's ISPO world congress in Hyderabad (India). Under the motto "Your Partner in Education", a total of 65 employees from Germany and Asia put up the booth, which, at almost 300 square metres, was one of the biggest of the industrial exhibition and demonstrated almost the entire current product portfolio. Highlights were the presentations of the

03-11-2019 | Industry, Real Estate & Constr …
VACUUMSCHMELZE
Improved magnetic properties at reasonable prices: New rare-earth permanent magn …
Hanau - Innovative ideas in product development - this is what characterizes the material specialists at VACUUMSCHMELZE (VAC), who continuously optimize the range of rare earth permanent magnets. The latest result of this development work is a new performance class of neodymium-iron-boron magnets, VACODYM 80X TP. The main features of this alloy are improved magnetic properties and higher environmental compatibility. A reduction of volatile heavy rare earths, in this case
03-09-2019 | Business, Economy, Finances, B …
Supply Demand Market Research
Plasterboard Market Comprehensive Analysis to 2025 by Uralita SA Group, USG Corp …
This report studies Plasterboard market status and outlook of Global and major regions, from angles of players, countries, product types and end industries; this report analyzes the top players in global market, and splits the Plasterboard market by product type and applications/end industries. Request for the sample copy http://www.supplydemandmarketresearch.com/home/contact/174008?ref=Sample-and-Brochure&toccode=SDMRCH174008&utm_source=S This report includes the estimation of market size for value (million USD) and volume (K Units). Both top-down and bottom-up approaches have been
01-30-2019 | Industry, Real Estate & Constr …
Wise Guy Research Consultants Pvt Ltd
Plasterboard 2019 Global Market Key Players – Trevo Industrial de Gesso Limite …
Plasterboard Market 2019 Wiseguyreports.Com Adds “Plasterboard – Global Market Growth, Opportunities, Analysis Of Top Key Players And Forecast To 2025” To Its Research Database. Description:  The global Plasterboard market was valued at million US$ in 2018 and will reach million US$ by the end of 2025, growing at a CAGR of during 2019-2025. This report focuses on Plasterboard volume and value at global level, regional level and company level. From a global perspective, this report represents overall
06-22-2018 | Arts & Culture
Ketterer Kunst
Spring Auction Season Yields Excellent Results Anticipating Autumn
Munich, June 21, 2018, (kk) Proceeds of around € 23.6 million*, excluding online- and direct sales, have been recorded for the seven auctions in the first term of 2018 that Ketterer Kunst held over a period of five days. This way the leading German auction house was even able to top last year's high performance level by more than € 2.5 million* once more defending its prime position among
09-08-2017 | Advertising, Media Consulting, …
Alltake Market Research
Plasterboard Market 2017 Is Gradually Growing High & Analyzed By Top Research Fi …
Plasterboard Market research report helps to get access to industry data and upcoming trends which will give you avenues to know about the market. This report gives opportunities to go through with industry analysis, share and forecast, Providing brief description about the market size its competitors and product identification. In this report, the global Plasterboard market is valued at USD XX million in 2016 and is expected to reach
06-05-2007 | IT, New Media & Software
Onepoint Software GmbH
ecofinance Selects Onepoint Project as the Central System for the Project Organi …
New system creates transparency in the project business – from initial offer to the point of acceptance Graz, June 5, 2007 – ecofinance Finanzsoftware & Consulting GmbH has selected Onepoint Project Team Edition as its new, leading system for putting their projects to work. Using Onepoint, the vendor of software solutions for finance management intends to control and implement their projects more efficiently. Onepoint represents web-based software for project leadership which
Comments about openPR
We publish our press releases on openPR.de because we like people who are "open" - just like us.
Frank Obels, CEO, INCONET - Informationssysteme, Communication und Netzwerkberatung GmbH