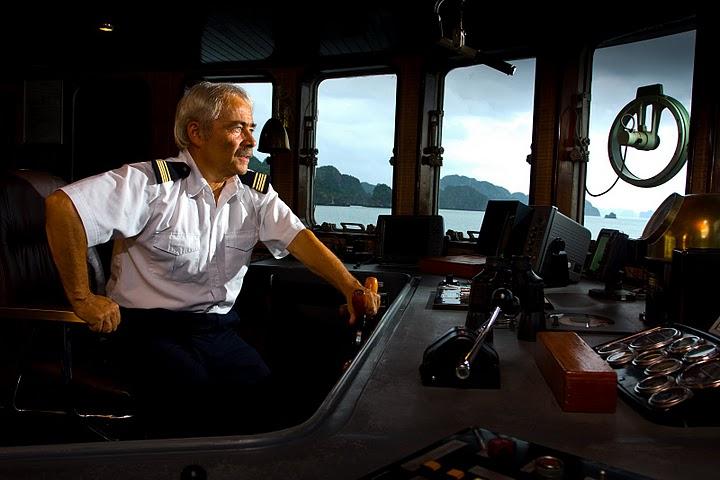 At the helm of the Emeraude on Ha Long Bay since 2005, Captain Jacques LeFur is one of the most accomplished mariners in the country. With four decades of experience on the water, Capt. LeFur holds numerous international marine certificates, as well as the rank of Master Captain, and has been recognized for his service by naval institutions in both France and Vietnam. Six years after his father, a soldier in the French colonial army, was killed in Vietnam, the young LeFur entered French naval school at the age of 12. After graduation, he completed courses in radio operations and advanced firefighting before obtaining a bachelor’s degree in mathematics at the University of Rennes. He was admitted into the Ecole Nationale Hydrographie, the French Naval Institute, in Marseilles in 1971.In 1973, following a four-month medical course, Capt. LeFur was assigned to Vietnam where he spent three years navigating medical river boats in the south of Vietnam. He received an award for his service to the people of Vietnam, and while in Asia worked for two years as Safety Officer of the luxury Puerto Princesa ferry cruises in the Philippines.After becoming First Class Captain in 1981, Capt. LeFur served aboard French passenger ships. He completed training courses at naval academies in England and South Africa. In 1989, Capt. LeFur was responsible for ships carrying up to 2,200 passengers, and was named a Captain of the company. In October of 1990, he was requisitioned to Iraq, where he was put in charge of river patrol boats on the Bassorah River. Upon his return to France, he achieved the title of Master Captain. For 17 years of service as Captain and Master Captain of passenger ships without accident, Capt. LeFur was decorated ‘Chevalier du Merite Maritime’ for safe navigation and service to France. He was also a recipient of the Ships Management and Human Behavior Certificate from the Southampton Institute of Higher Education in England.Capt. LeFur was inspired to relocate to Vietnam after spending a holiday in Ha Long Bay aboard the Emeraude. Since becoming captain of the Emeraude in 2005, his international expertise has raised the bar on the vessel’s operations in terms of comfort, service and safety.http://www.emeraude-cruises.com 46 Le Thai To Street, Hanoi, Vietnam. Tel: (84-4) 3935 1888, Fax: (84-4) 3825 5342, Hotline: (84) 9 0623 7899 E-mail: sales@emeraude-cruises.comEmeraude Classic Cruise is a Halong Bay luxury cruise in Vietnam. It is a replica of an early 20th century paddle steamer called "Emerade".Emeraude Classic Cruises 46 Le Thai To Street, Hanoi, Vietnam. Tel: (84-4) 3935 1888, Fax: (84-4) 3825 5342, Hotline: (84) 9 0623 7899 E-mail: sales@emeraude-cruises.com

10-27-2011 | Tourism, Cars, Traffic
Appletree Asia - Hospitality Division
La Residence Hue Emerges as Favorite in 2011 Conde Nast Awards
On the eve of its sixth anniversary, travelers have thrown their votes behind La Residence Hotel and Spa in Hue to win the art-deco property its first appearance as one of Asia’s top 20 resorts in the Conde Nast Traveler Readers’ Choice Awards 2011. La Residence’s debut in the Conde Nast Readers’ Choice Awards, considered one of the most definitive rankings in the hospitality industry, saw the resort claim the 20th
09-30-2011 | Tourism, Cars, Traffic
Appletree Asia - Hospitality Division
Villa Maly Once A Royal Residence in Luang Prabang
LUANG PRABANG, Laos — Villa Maly the scrupulously refurbished former residence of a Laotian prince and princess, as the royal capital’s most discriminating hotel. The 33-room boutique property is anchored by the 1938-built residence of Princess Khampieng and Prince Khamtan, a grandson of the 19th century’s King Zakarine. The residence is located in a neighborhood of garden homes that was once a royal enclave and today ranks
07-28-2011 | Tourism, Cars, Traffic
Appletree Asia - Hospitality Division
Emeraude Installs Clock System for Security on Halong Bay
HALONG BAY, Vietnam (27 July 2011) – Emeraude Classic Cruises installed a finger print clock system this month, ensuring that its crew make appointed safety checks throughout the night. Every hour, the Emeraude crew member on watch will leave his fingerprint on screen systems installed in the wheelhouse, in the engine room, the crew quarters and the restaurant. The system identifies the crew member, and the time of his visit.
07-26-2011 | Tourism, Cars, Traffic
Appletree Asia - Hospitality Division
Emeraude Classic Cruises Launched the Onboad Safety Video to Emphasize its Safet …
The Emeraude Classic Cruises was launching a video of Captain Jacques Le Fur describing about onboard safety equipment that the Emeraude strives to ensure all passengers and crews. There has been some misfortune going on Halong Bay in recent months. In February, a tourist boat sunk, drowning 12 passengers. Then another tourist boat went down in May, though 28 French passengers escaped harm in that incident. These incidents have damaged