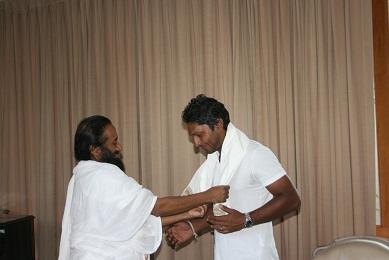 Sri Lankan cricket team captain Kumar Sangakara thanked Sri Sri Ravi Shankar and The Art of Living for helping the Sri Lankan cricket team to come out of trauma after the Lahore attack. Kumar Sangakara called on Sri Sri in Colombo on January 23. Sri Sri was on a three-visit to Sri Lanka, from January 21-23.In 2009, immediately after the Lahore attack , the team had undergone breathing sessions and meditation techniques of the Art of Living in Colombo.On completing the course then, Kumar Sangakara had said that he had felt relaxed and calm after two sessions of the Sudarshan Kriya. It was “a really pleasant experience”, the sports ministry had quoted him. "The Sri Lankan cricketers have now found a new direction to be relaxed, calm and still be dynamic and alert," the ministry said."Relaxation and recovery is an integral part of a sportsperson's lifestyle, it is techniques like Sudarshan Kriya breathing technique that gives them the energy to bounce back," he said. The eight-hour workshop was conducted by Swami Sadyojatha, International Director, The Art of Living. On being asked if the cricketers spoke about the trauma, Sri Sri said, “The four days that we spent together, I didn't ask them anything about Lahore and they didn't tell me also. It was like past is past and finished. It was about how to bring your mind to the present and move ahead. They had the belief as well and they wanted to do something as a team.”For more enquiries, contact:Karthik Krishna: +91-9342582375Mail: media.coordinator@artofliving.orgThe Art of Living Foundation, Sri Sri Ravi Shankar, Yoga, Meditation, Sudarshan Kriya, Spirituality, Stress Relief, Social Transformation, Youth Empowerment, World Peace, Disaster Relief & Trauma Care, NGO, AyurvedaThe Art Of Living 21st Km Kanakpura Road Bangalore-560082 Karnataka India Office:+918028432274

06-07-2011 | Arts & Culture
Sportsworld
“Free As A Butterfly” - Laure Bury - The Fairway Village Wimbledon
Following her successful exhibition at the Canvas Gallery in Wimbledon Village, West Country artist Laure Bury is exhibiting a new collection of Butterfly paintings in Sportsworld’s official hospitality suite ‘The Fairway Village’ during this year’s Wimbledon Tournament. Laure’s unique style and laboured technique captures the essence of femininity, naivety and fragility. Her textured butterfly paintings are an explosion of colour and joy with a gentle ethereal quality. “I create joyous and powerful
12-03-2010 | Leisure, Entertainment, Miscel …
Sportsworld
Sportsworld Scoops Bronze for Official Wimbledon Hospitality Experience
International hospitality and event services group, Sportsworld, has been recognised by a panel of event industry experts for the delivery and management of their official Wimbledon programme. Sportsworld scooped the Bronze award in their category for Best Hospitality Event at The Eventia Awards which were held at the Hilton Park Lane on Friday 26th November 2010. The Eventia Awards honour outstanding business-to-business and business-to-consumer events including corporate events, product launches, company exhibitions,

03-09-2021 | Advertising, Media Consulting, …
Ken Research Pvt Ltd
Sri Lanka Agriculture Market, Sri Lanka Agriculture Industry: Ken Research
Agriculture is most vital source of employment for majority of the Sri Lankan workforce. In the continuation sector, rice is main crop and farming rice is the most significant economic activity for the bulk of the people living in rural areas. Growing in the area under cultivation and improved the productivity owing to modernization of agriculture is the key reasons for enhance in production. The rehabilitation of country’s extensive ancient
08-16-2018 | Advertising, Media Consulting, …
6Wresearch- Market Intelligence Solutions
Sri Lanka Stationery Market (2018-2024)-6Wresearch
Rising Population, Increasing Number of Education Enrolments along with Sri Lankan Government Goals to Achieve 100% Literacy Rate by 2020 Would Surge the Demand for Sri Lanka Stationery Market During the Forecast Period - 6Wresearch The Stationery Market in Sri Lanka is at a growing stage. Several upcoming government schemes related to education along with growing population are expected to drive the demand for stationery items in Sri Lanka over the
05-11-2017 | Leisure, Entertainment, Miscel …
LastThink
Sri Lankan Radio LIve - Internet Stream Player
Offering the most advanced and required Sri Lankan Live Radio, we tend to provide our users with an unbeatable application, which is customized only for iPhone, iPod and iPad touch. This exclusive application serves the premium Radio Stations feasible in any country. So, pamper yourself to get acquainted with a comprehensive range of entertainment options. You are granted an ideal opportunity to listen to the state-of-the-art music of acclaimed singers,
11-12-2012 | Business, Economy, Finances, B …
RNCOS E-Services Pvt. Ltd.
Sri Lanka Insurance Industry Recording Impressive Growth
Sri Lanka Insurance Industry is witnessing a strong growth since past few years. Dominated by general insurance segment, the total Gross Written Premium (GWP) in the country increased by 18% in 2011 compared to the previous year. In the coming years, the industry is further expected to touch the pinnacle of success with ever-growing life insurance penetration, emergence of online insurance services, and rising foreign investment in the industry. Taking
09-12-2012 | Associations & Organizations
The Art Of Living
Sri Sri Ravi Shankar receives Honorary Doctorates from Argentina
Argentina, Sept 7. 2012: Humanitarian leader and Founder, The Art of Living, Sri Sri Ravi Shankar was awarded the honorary doctorate, Honoris Causa Doctor at the Siglo XXI University Campus in the city of Cordoba, Argentina. Dr. Jose Manuel de la Sota, Governor of Cordoba, also named Sri Sri as the honorary citizen of Cordoba for his foundation's humanitarian work. Dr Sergio Lais, General Consul of India named Sri Sri as
02-08-2011 | Fashion, Lifestyle, Trends
Art Of Living
Corruption should leave India says Sri Sri
"Fight corruption with truth and non-violent means, we have to come together to root out corruption from India”, Sri Sri Ravi Shankar told a large gathering of youth, who had assembled at the Art of Living International Center for the Yuva Jagruti Sammelan. The youth, he said, have an important role to play in combating corruption, "The youth have to bring a wave of transformation. We need to stand strong against
Comments about openPR
OpenPR ist the nicest and most clearly laid out PR platform I have seen to this day. The press releases are displayed very nicely and clearly and without any unnecessary frills. The updates are fast and the finished release looks appealing and is clearly legible. Even with 16 years of experience one discovers new things from time to time. Congratulations!
Gabriele Ketterl, Director Marketing & PR, Menads