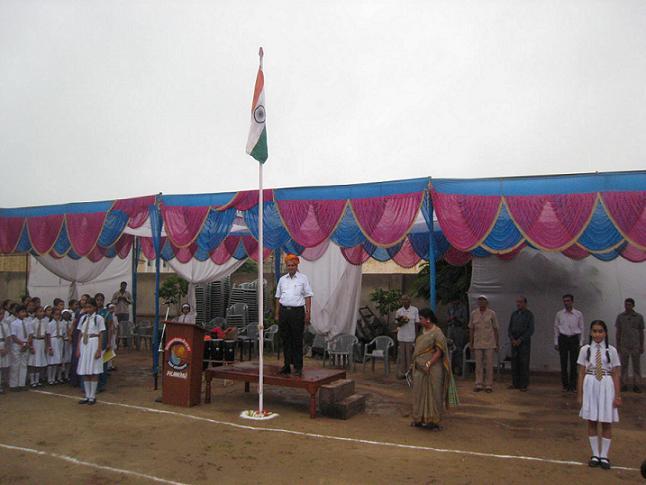 The India today we live is infinitely more prosperous, more creative, more resilient and more self assured for a brighter India tomorrow than at any time since obtaining independence on 15th August 1947 when the country came out of the British rule, free to celebrate its diversity and differences, its many languages, faiths and cultures; free to be different and respected for it. The fundamental reason for this transformation is due to the citizens of India who do not hesitate to proclaim with passion "Proud to be an Indian".Located in the heart of Shekhawati region of Rajasthan, Pilani is well known for various educational institutions, CSIR Laboratory CEERI as well as the upcoming BrahMos Missile Assembly Project unit. Jamuna Mishra Academy – JMA established in the year 2004 which has been making rapid strides in early childhood education is presently one of the most sought after schools at Pilani Rajasthan. JMA which started with an enrollment of 60 students for the Nursery, LKG, First Junior and Class1 has grown today till Class VIII with well over 500 students. While the school admits both boys and girls, the girl student enrollment has been steadily rising every year and is presently close to 50% of the total strength which itself is a matter of pride in a state like Rajasthan which had alarmingly low record of girl’s educationThough the pouring rains at Pilani sought to be a dampener and an obstacle to the 65th Independence Day celebrations, the enthusiasm of the children ensured that the event was observed with patriotic fervor, gaiety and enthusiasm.On August 15, 2011, Mrs Booma Natarajan, Principal JMA welcomed the gathering and introduced the Chief Guest well known senior citizen of Pilani Dr Mahendra Kumar Kashiramka who requires no introduction in the entire Jhunjhunu district. He is presently visiting Professor at Birla Institute of Technology and Science – BITS from where he had obtained his bachelors, masters as well as doctoral degrees and also had been serving at the same institution in various capacities for the past over three decades. After hoisting the flag and the school band playing the National Anthem, Prof Kashiramka inspected the parade and took the salute. The dumble drill display by the students of JMA and the Hindi patriotic poem recited by Jigyasa Saini was appreciated by one and all. The team of children dressed in attractive costumes who danced braving the rains for the immortal song "jahaan Daal-Daal par sone kii chidiyaa karati hai baseraa vo bhaarat desh hai meraa" stole the hearts of the audience. The group of 30 students who participated on August 14th in the Inter Institutional Patriotic song competition held at Birla Public School (BPS) Pilani and bagged the prize, sang the same song and won a thunderous applause from the audience. Each one of them received a medal from the Chief Guest.Addressing the gathering Prof MK Kashiramka urged the young boys and girls of the school to become useful citizens for the service of the nation. The Chief Guest had words of praise for the Principal Mrs Booma Natarajan and teachers of JMA who as a team had worked hard to make the school one among the top ranking schools in Pilani. When the celebrations ended, the parents and children who had come for the function left with beaming faces and pride that they were indeed part of an institution which is a shining jewel in the crown among the schools at Pilani.For more details about school see http://www.jma-pilani.page.tl/About JMA Pilani: Smt Jamuna Mishra Academy - JMA Pilani is a Co-educational English Medium School with Experienced Teachers, Spacious Classrooms and Modern Amenities Designed to impart Quality Education combined with All Round Personality Development and lay the Best Foundation for the Child's Future. For more details about JMA Pilani see http://www.jma-pilani.page.tl/Mrs Booma Natarajan MSc (Chemistry), MA (Childcare & Education), B.Ed Principal Jamuna Mishra Academy – JMA Atma Ram Padia Marg Pilani Rajasthan 333031 India Phone 91-1596-242314 Email booma_pilani at yahoo.co.in Website www.jma-pilani.page.tl/

04-14-2020 | Arts & Culture
Al-Khalifa Business School
Prof. Igor Eleferenko appointed Dean of Al-Khalifa Business School
H.E. Prof. Sir Igor Eleferenko Ph.D. (Russian Federation) has been elected on 6th April 2020 as the Dean of Al-Khalifa Business School. Born on 23rd May 1958, in Moscow; in 1980 he graduated from Moscow State Pedagogical Institute named after M. Teresa. He has more than 40 years of experience as Associate Editor, Editor, Deputy Head of the APN Bureau in Havana, Deputy Editor-in-Chief, Editor-in-Chief of AVID APN, Editor-in-chief of TRK "TV-News"
05-28-2019 | IT, New Media & Software
Prof Research Reports
Detailed research on Global and Chinese Temperature Meters Market just published …
Worldwide Temperature Meters Market report of 2019 provides a detailed market overview as well as industry analysis for/of companies, manufacturers and distributors covering data on gross margin, cost structure, consumption value, sale price and more. Temperature Meters Market Insights 2019, Global and Chinese Scenario is a professional and in-depth study on the current state of the global Temperature Meters industry with a focus on the Chinese market. The report provides key
04-20-2019 | Science & Education
Banasthali
Banasthali Celebrates 87th Birthday of Dada Prof Diwakar Shastri
By nurturing Banasthali which is today one among the most sought after and top ranking women’s universities in India with global ranking, Prof Diwakar Shastri known to one and all as “Dada” built capacities for the spirit of inquiry, creativity and moral leadership among the enrolled girl students and became their role models. Known for his dignified unassuming personality, gleaming intellect, meticulous planning, deep regard for punctuality, far reaching vision and
11-13-2018 | Health & Medicine
ISA Pharmaceuticals
ISA Pharmaceuticals´ Chief Scientific Officer Prof. Cornelis Melief Receives ES …
Leiden, The Netherlands, November 13, 2018 – ISA Pharmaceuticals B.V., a clinical-stage immuno-oncology company, today announced that its Chief Scientific Officer Prof. Cornelis Melief has been selected by the European Society for Medical Oncology (ESMO) to receive the 2018 ESMO Immuno-Oncology Award in recognition of his life’s work in studying the interactions of the immune system with cancer. He will receive the award during an official ceremony at the opening
09-27-2017 | Energy & Environment
Banasthali
MNIT Jaipur Prof SP Chaurasia Talk on Separation Technologies for Water Purifica …
Globally, there are over 663 million people living without a safe water supply close to home, spending countless hours queuing or trekking to distant sources, and coping with the health impacts of using contaminated water. 1.8 billion People use a source of drinking water contaminated with faeces, putting them at risk of contracting cholera, dysentery, typhoid and polio. The Sustainable Development Goals, launched in 2015, include a target to ensure
09-18-2017 | Science & Education
Banasthali
Prof Joy Mukhopadhyay Talks on Colour Science & Technology at Banasthali
One field which combines Chemistry, Physics, Physiology and Psychology is undoubtedly Colour Science and Technology. Global market size of dyes and pigments is of the order of USD 27.8 Billion with India market size of USD 4.9 Billion. Specialty chemicals, which comprise low volume, high value chemicals with specific applications, constitute a significant part of the Indian chemical industry include agrochemicals, flavors and fragrances, surfactants, polymer additives, personal care ingredients,
Comments about openPR
OpenPR is clearly structured and remains true to its principle of confining itself to the essential parts. OpenPR has proven to be a very good and reliable partner to our media agency: Within the shortest time the releases are online and go down well with the media representatives. The success of OpenPR is reflected in the steadily increasing number of press releases. It is good that OpenPR exists!
Ursula Koslik, Director Marketing & PR, F+W Hamburg