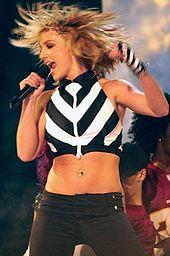 Britney Spears on her tour Oops I did it Again. Next tour Femme Fatale with www.savemeaticket.com

Britney Spears has become one of the world's best-selling artists, most talked-about stars and one of the biggest names in modern pop. Her hits have included Uk number ones Baby One More Time, Oops I Did It Again, Born To Make You Happy, Toxic and Everytime, and her albums have all been certified multi-platinum. She returns to the UK with her new World Tour - Femme Fatale tour. Kicking off in Belfast on October 25 and finishing in Manchester on November 6. Tickets for her UK tour are available now on www.savemeaticket.com. Britney Spears became an international pop culture icon immediately after launching her recording career. Rolling Stone magazine wrote: "One of the most controversial and successful female vocalists of the 21st century," she "spearheaded the rise of post-millennial teen pop. Britney is listed by the Guinness World Records as having the "Best-selling album by a teenage solo artist" for her debut album Baby One More Time which sold over thirteen million copies in the United States. Melissa Ruggieri of the Richmond Times-Dispatch reported, "She's also marked for being the best-selling teenage artist. Before she turned 20 in 2001, Spears sold more than 37 million albums worldwide". Barbara Ellen of The Observer has reported: "Spears is famously one of the 'oldest' teenagers pop has ever produced, almost middle aged in terms of focus and determination. Many 19-year-olds haven't even started working by that age, whereas Britney, a former Mouseketeer, was that most unusual and volatile of American phenomena — a child with a full-time career. While other little girls were putting posters on their walls, Britney was wanting to be the poster on the wall. Whereas other children develop at their own pace, Britney was developing at a pace set by the ferociously competitive American entertainment industry". Britney Spears was Yahoo!'s most popular search term between 2005 and 2008, and has been in a total of seven different years. She was named as Most Searched Person in the Guinness World Records book edition 2007 and 2009. Spears has also become a major influence among many new artists, including Kristinia DeBarge, Lady Gaga, Little Boots, Selena Gomez & the Scene, Pixie Lott] and Miley Cyrus who has cited Spears as one of her biggest inspirations and has also referenced Spears in her hit song "Party in the U.S.A.". Spears' personal breakdown was also cited as an inspiration for Barry Manilow's album "15 Minutes". Bebo Norman wrote a song about Britney Spears, called "Britney", which was released as a single. Boy band Busted also wrote a song about her called "Britney", which was on their debut album. She is also mentioned in P!nk's song "Don't Let Me Get Me". She was cited as the inspiration of Gwyneth Paltrow's character in the 2010 film Country Strong. Richard Cheese called Britney Spears "a remarkable recording artist" and also went on to say that she was "versatile" and what the industry calls an "artist". People magazine and MTV reported that October 1, 2008, the Bronx's John Philip Sousa Middle School, named their music studio in honor of Britney Spears. Britney Spears herself was present during the ceremony and donated $10,000 to the school's music program. http://www.savemeaticket.com/event/concert/pop-n039-rock/britney-spears-tickets • 25/10/2011, 19:00, Belfast - Odyssey Arena • 31/10/2011, 19:00, London - Wembley Arena • 05/11/2011, 19:00, Cardiff - Motorpoint Arena (Cardiff International Arena)Save Me A Ticket is an online ticket exchange that allows people to buy and sell live event tickets in a completely safe and secure way. This includes sport, concert, theatre and other events. We offer tickets even the event is 'sold out'. Save Me A Ticket.com is a UK city based company registered in England and Wales under the company number 6847840. Our registered address is located next to the world renowned O2 Arena in London's Docklands, Waterfront Studios, Royal Victoria Docks, London, E16 1AG. Our Goal We understand that finding tickets to popular events can be tricky and there is the possibility of being ripped off by a ticket tout, so we at Save Me A Ticket.com try out utmost to allow consumers to buy and sell tickets in a safe way. Our Promise At Save Me A Ticket, all ticket sales are guaranteed. To uphold this, we offer ticket tracking and full customer service support. Buyers: Once you purchase a ticket and have received a confirmation email from us, Save Me A Ticket make sure that you receive your ticket in time for the event and we will provide a full refund if any problems arise. Sellers: We collect the money as soon as the purchase occurs so that we can guarantee that you get paid.Save Me A Ticket Royal Victoria Docks, 1 Dock Road, Unit G32b E16 1AG London

08-12-2011 | Leisure, Entertainment, Miscel …
Save Me A Ticket
The Kaiser Chiefs Are Back
Primed with three albums recorded in rapid succession during the latter half of the past decade, the Kaiser Chiefs took a calculated gamble and decided to regroup out of the spotlight with a self-imposed hiatus. Last seen when they played their biggest shows to date at London's Wembley Arena back in 2009 the band have been anything but idle in the intervening period which has seen Nick Hodgson and Simon
08-09-2011 | Sports
Save Me A Ticket
ATP World Tour Finals
The ATP World Tour Finals is a tennis tournament played at the end of each year, involving the top eight players in the men's tennis world rankings. Unlike most of the other events on the men's tour, the ATP World Tour Finals is not a straightforward knock-out tournament. Eight players are divided into two groups of four, and play three round-robin matches each against the other three players in their group.
07-29-2011 | Leisure, Entertainment, Miscel …
Save Me A Ticket
Think Floyd – Original Pink Floyd Tribute Band Coming
Think Floyd, the first Pink Floyd tribute band in the UK, were formed in South London, England in May 1994 by four talented and experienced musicians and songwriters. When they played "Comfortably Numb" for the first time in a pub in Forest Hill it the audience response was amazing, they knew they had made the right decision. The band's popularity grew and they went on to perform at many major
04-05-2011 | Leisure, Entertainment, Miscel …
Save Me A Ticket
Download Festival 2011
The UK's largest rock and metal festival heads back to Donington in June. The Festival Arena will be open from June 10th - 12th, with the campsite opening up from Wednesday June 8th. Now heading into its 9th year, the 2011 Download Festival promises to deliver another truly memorable weekend of music and entertainment. The Download Festival; owned by Live Nation, is a three day rock music festival which is held in

09-04-2009 | Media & Telecommunications
X-CITE RECORDS
Jeremy Amelin, finalist singer from French Star Academy, hits back at Britney Sp …
PARIS, FRANCE, August 27, 2009 /X-CitePressRelease/ -- Jeremy Amelin, aged 23 and finalist singer from French Star Academy, is giving final touches to his upcoming new electro album, due out November 2nd, 2009. Working with top-notch electro music producers such as James Rendon, Pink Noisy, R&D Corporation, Wesfield, among others, Jeremy Amelin has confirmed he has just recorded a new sexy electro-track all about the one and only Britney Spears.
04-29-2008 | Tourism, Cars, Traffic
GenieKnows
Make-A-Wish is Supported by GenieKnows.com to Make Wishes Come True
GenieKnows.com and Stephen Noton have teamed up to help raise awareness and funds for Make-A-Wish Atlantic Provinces Canada to fulfill the wish of Britney, a New Brunswick child, to meet NASCAR racing driver Tony Stewart. Make-A-Wish Atlantic Provinces grants wishes, creating hope and happiness for children with life-threatening illnesses. It is part of the largest not-for-profit wish granting organization in the world, serving 32 countries with international affiliates on
05-08-2007 | Leisure, Entertainment, Miscel …
Nikki News
Now live the Jet Set life over the internet on Jet Set Tour.com
Jet Set Tour will interview celebrities like Paris Hilton, Britney Spears, Akon and American Idol winners. Jet Set Tour.com is an exciting way to see what goes on in the celebrity lifestyle around the world with videos, photos, chat rooms and blogs on Google, YouTube, MySpace, Blogger and Yahoo. You will get to interact with celebrities like Paris Hilton, Britney Spears, Chris Noth and Akon. Miami Beach, Florida - Sunday May
03-20-2007 | Health & Medicine
MINES and Associates
Britney Spears, Lindsey Lohan, Celebrity Rehabilitation and Employer Based EAP
DENVER, CO -- March 19, 2007 -- Britney Spears, Lindsey Lohan and other high profile celebrities have brought to the forefront the growing need for better drug/alcohol treatment and mental health treatment. The positive side of celebrities going public about their rehabilitation is that it helps to destigmatize and make more acceptable the use of this type of treatment by the general public. Even though the recent troubles of Britney
01-10-2007 | Media & Telecommunications
Susan Harrow
Britney or Oprah: What Kind of "Exposure" Is for You?
Britney Spears will get 2 weeks of fame from getting her privates caught on camera. Is this the best form of \"exposure\"? \"Not!\" says Susan Harrow. \"That kind of fame is free, but most people don’t want publicity for baring their wares or their souls\". Harrow, a kind of Mother Theresa of PR, is giving authors, entrepreneurs, small business people, and whams another route -- one they can understand and
Comments about openPR
Your portal is fast, simple, and easy to use. Others may have more functions but they also demand more editing time, you have to preformat the text in order to achieve a good result etc. I think openPR is really fantastic!
Andreas Knepper, wallmedien AG