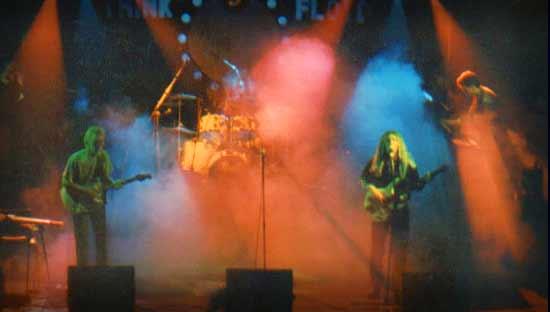 Think Floyd, the first Pink Floyd tribute band in the UK, were formed in South London, England in May 1994 by four talented and experienced musicians and songwriters. When they played "Comfortably Numb" for the first time in a pub in Forest Hill it the audience response was amazing, they knew they had made the right decision. The band's popularity grew and they went on to perform at many major venues including the Royal Festival Hall in London, England. Their live repertoire has included the classic masterpieces from "Dark Side of The Moon", "Animals" and "The Wall" as well as old favourites such as Arnold Layne and Bike and more recent material from "The Division Bell". Many of the Think Floyd fans in the audience would say how they would love to hear new Floyd Music, and so the members of the band were inspired to write their own songs influenced by the writing of Roger Waters, David Gilmour, Rick Wright, Nick Mason and of course Syd Barrett. In 1997 the band decided that it was time to use their experience and musicianship to write their own original material and so set themselves apart from the standard tribute bands. As established and experienced songwriters with this was no problem and Think Floyd soon had their first album Hope completed. Since Think Floyd formed in the UK in 1994 many more Pink Floyd tribute bands have been formed. At the present time there are over 80 Pink Floyd cover bands worldwide.These bands cover classic songs ranging from Arnold Layne & Bike through classics from Dark Side of the Moon and The Wall up to the most recent tracks from The Division Bell. Think Floyd – Original Pink Floyd Tribute Band are touring in UK, so don’t miss on their great performance and buy Think Floyd Tickets today on Save Me A Ticket.com http://www.savemeaticket.com/event/concert/tribute-acts/think-floyd-tickets#. Extract from the tour: 18/08/2011 - 19:00 - The Assembly/Leamington Spa http://www.savemeaticket.com/buy-tickets/concert/tribute-acts/think-floyd-tickets/uk-events/leamington-spa/2011-08-18 27/08/2011 - 19:30 - Spa Pavillion/Felixstowe http://www.savemeaticket.com/buy-tickets/concert/tribute-acts/think-floyd-tickets/uk-events/felixstowe/2011-08-27 24/11/2011 - 19:30 - The Waterfront/Norfolk http://www.savemeaticket.com/buy-tickets/concert/tribute-acts/think-floyd-tickets/uk-events/norfolk/2011-11-24 Save Me A Ticket is an online ticket exchange that allows people to buy and sell live event tickets in a completely safe and secure way. This includes sport, concert, theatre and other events. We offer tickets even the event is 'sold out'. Save Me A Ticket.com is a UK city based company registered in England and Wales under the company number 6847840. Our registered address is located next to the world renowned O2 Arena in London's Docklands, Waterfront Studios, Royal Victoria Docks, London, E16 1AG. Save Me A Ticket petra.williams@simplysportstickets.com E16 1AG London Royal Victoria Docks, 1 Dock Road, Unit G32b 0044(0)844 8800636

08-12-2011 | Leisure, Entertainment, Miscel …
Save Me A Ticket
The Kaiser Chiefs Are Back
Primed with three albums recorded in rapid succession during the latter half of the past decade, the Kaiser Chiefs took a calculated gamble and decided to regroup out of the spotlight with a self-imposed hiatus. Last seen when they played their biggest shows to date at London's Wembley Arena back in 2009 the band have been anything but idle in the intervening period which has seen Nick Hodgson and Simon
08-09-2011 | Sports
Save Me A Ticket
ATP World Tour Finals
The ATP World Tour Finals is a tennis tournament played at the end of each year, involving the top eight players in the men's tennis world rankings. Unlike most of the other events on the men's tour, the ATP World Tour Finals is not a straightforward knock-out tournament. Eight players are divided into two groups of four, and play three round-robin matches each against the other three players in their group.
07-08-2011 | Leisure, Entertainment, Miscel …
Save Me A Ticket
Tickets For Britney Spears - Femme Fatale Tour In UK
Britney Spears has become one of the world's best-selling artists, most talked-about stars and one of the biggest names in modern pop. Her hits have included Uk number ones Baby One More Time, Oops I Did It Again, Born To Make You Happy, Toxic and Everytime, and her albums have all been certified multi-platinum. She returns to the UK with her new World Tour - Femme Fatale tour. Kicking off
04-05-2011 | Leisure, Entertainment, Miscel …
Save Me A Ticket
Download Festival 2011
The UK's largest rock and metal festival heads back to Donington in June. The Festival Arena will be open from June 10th - 12th, with the campsite opening up from Wednesday June 8th. Now heading into its 9th year, the 2011 Download Festival promises to deliver another truly memorable weekend of music and entertainment. The Download Festival; owned by Live Nation, is a three day rock music festival which is held in