The Kaiser Chiefs Are Back 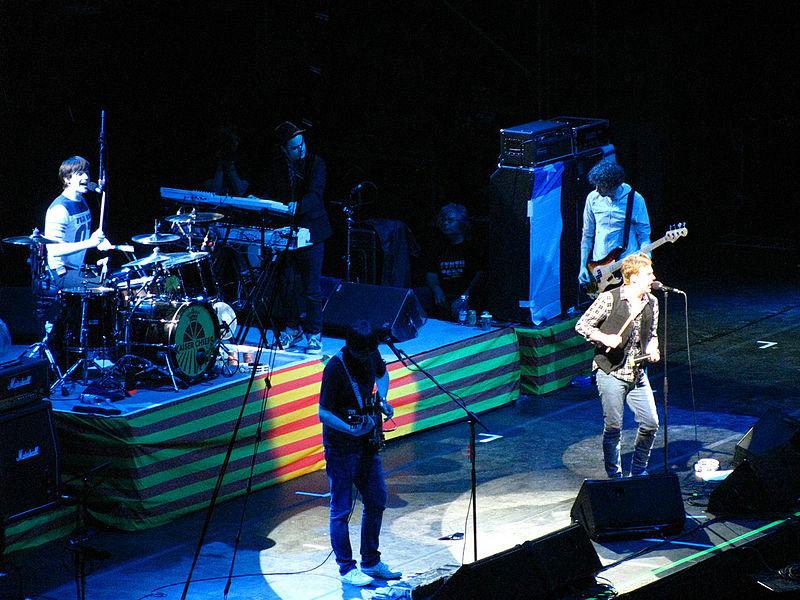 Primed with three albums recorded in rapid succession during the latter half of the past decade, the Kaiser Chiefs took a calculated gamble and decided to regroup out of the spotlight with a self-imposed hiatus. Last seen when they played their biggest shows to date at London's Wembley Arena back in 2009 the band have been anything but idle in the intervening period which has seen Nick Hodgson and Simon Rix form Chewing Gum Records - home of The Neat, with Hodgson also embarking on numerous production opportunities with new acts including The Vaccines alongside song writing contributions for the likes of Dame Shirley Bassey, Mark Ronson and Duran Duran. The recipients of various awards over the past six years, amongst others; three Brits, Ivor Novello’s and other assorted accolades, the band have also generated in excess of six million album sales - including the debut chart topping soundtrack of 2005 'Employment' - whilst cementing a worldwide reputation as a phenomenal live act accompanying the likes of Green Day , Foo Fighters and U2 on worldwide tours , two sold out shows at London’s Earls Court Arena at the close of 2007 followed by an historic hometown show at Leeds United’s Elland Road football ground in the Spring of 2008 and subsequently dates and festival appearances across the globe. Initially conceived whilst on a break in Cornwall, singer Ricky Wilson and friend Oli Beale had been discussing how the band might make a return. Wilson was keen to offset the promo frenzy that surrounds an album, prior to its release usually months later, hence the idea was to have the music ready and let people hear it immediately, no pre-emptive promotional schedules - fans and critics alike able to access the music at the same time and thus 'The Future Is Medieval' was born. Coincidently Wilson's holidaying companion Beale's day job led to an involvement that would be integral to the success of the entire model and the backing of some of the country’s leading lights in the technology to actually bring the idea to fruition. Hodgson, meanwhile had constructed a studio in the basement of the bands management offices and the band, although not active were writing, demoing and compiling a catalogue of tracks which would later be recorded with the likes of Tony Visconti, Ethan Johns, Owen Morris and Hodgson himself. The band's template was taking shape and whilst managing to remain out of sight ,were able to evolve their ideas without distraction. Released to an unsuspecting public on June 3rd 2011, 'The Future Is Medieval' has embraced the spontaneity and excitement of making music again and has seen a wide ranging and diverse selection of influences - short sharp new wave , a discerning nod towards Bowie , surprisingly Pink Floyd - an influence on the entire idea both musically and visually and the likes of the Who which sees the band return to the scene of their earlier endeavors.The net result for both the band, their fans and on a broader level from people who may not have been fans of them previously was to have their interest sparked by the originality of the idea...’The Future Is Medieval’. The resultant finished thirteen track album released some weeks later has become the band’s fourth Top Ten album in six years, no mean feat these days and life shows no signs of slowing down as they continue to wow crowds across Europe over the coming weeks before returning to the UK for V festival and two massive shows in Leeds. More info about the band on their official web: kaiserchiefs.com. Kaiser Chiefs will play: 10th Sept Leeds Kirkstall Abbey 11th Sept Leeds Kirkstall Abbey, tickets for their UK tour available on http://www.savemeaticket.com/event/concert/pop-n039-rock/kaiser-chiefs-tickets. Save Me A Ticket is an online ticket exchange that allows people to buy and sell live event tickets in a completely safe and secure way. This includes sport, concert, theatre and other events. We offer tickets even the event is 'sold out'. Save Me A Ticket.com is a UK city based company registered in England and Wales under the company number 6847840. Our registered address is located next to the world renowned O2 Arena in London's Docklands, Waterfront Studios, Royal Victoria Docks, London, E16 1AG. Save Me A Ticket info@savemeaticket.com E16 1AG, London Royal Victoria Docks, 1 Dock Road, Unit G32b 004408448800636 http://www.savemeaticket.com

08-09-2011 | Sports
Save Me A Ticket
ATP World Tour Finals
The ATP World Tour Finals is a tennis tournament played at the end of each year, involving the top eight players in the men's tennis world rankings. Unlike most of the other events on the men's tour, the ATP World Tour Finals is not a straightforward knock-out tournament. Eight players are divided into two groups of four, and play three round-robin matches each against the other three players in their group.
07-29-2011 | Leisure, Entertainment, Miscel …
Save Me A Ticket
Think Floyd – Original Pink Floyd Tribute Band Coming
Think Floyd, the first Pink Floyd tribute band in the UK, were formed in South London, England in May 1994 by four talented and experienced musicians and songwriters. When they played "Comfortably Numb" for the first time in a pub in Forest Hill it the audience response was amazing, they knew they had made the right decision. The band's popularity grew and they went on to perform at many major
07-08-2011 | Leisure, Entertainment, Miscel …
Save Me A Ticket
Tickets For Britney Spears - Femme Fatale Tour In UK
Britney Spears has become one of the world's best-selling artists, most talked-about stars and one of the biggest names in modern pop. Her hits have included Uk number ones Baby One More Time, Oops I Did It Again, Born To Make You Happy, Toxic and Everytime, and her albums have all been certified multi-platinum. She returns to the UK with her new World Tour - Femme Fatale tour. Kicking off
04-05-2011 | Leisure, Entertainment, Miscel …
Save Me A Ticket
Download Festival 2011
The UK's largest rock and metal festival heads back to Donington in June. The Festival Arena will be open from June 10th - 12th, with the campsite opening up from Wednesday June 8th. Now heading into its 9th year, the 2011 Download Festival promises to deliver another truly memorable weekend of music and entertainment. The Download Festival; owned by Live Nation, is a three day rock music festival which is held in

02-13-2019 | Business, Economy, Finances, B …
Orbis Research
Health Insurance Market 2019 Anthem UnitedHealth Group DKV BUPA Kaiser Permanent …
Health insurance is a means for financing a person’s health care expenses. While the majority of people have private health insurance, primarily through an employer, many others obtain coverage through programs offered by the government. Other individuals do not have health insurance at all. Health insurance is a type of insurance coverage that covers the cost of an insured individual's medical and surgical expenses. Depending on the type of health insurance
01-16-2019 | Advertising, Media Consulting, …
HTF Market Intelligence Consulting Pvt. Ltd.
Aluminum Wire Market Is Booming Worldwide | Kaiser Aluminum, Baotou Aluminium
HTF MI recently introduced Global Aluminum Wire Market study with in-depth overview, describing about the Product / Industry Scope and elaborates market outlook and status to 2023. The market Study is segmented by key regions which is accelerating the marketization. At present, the market is developing its presence and some of the key players from the complete study are Kaiser Aluminum, Baotou Aluminium, Vimetco, UC RUSAL, Southwire, Alro, Hydro, Southern
10-18-2018 | Business, Economy, Finances, B …
Market Research Hub
Software, Hospitals, Outpatient Care Centers, National Health Service, Kaiser Pe …
The market for Hospitals and Outpatient Care Centers is growing with the expansion of this Industry Sector Worldwide. Market Research Hub (MRH) has added a new report titled “Global Hospitals and Outpatient Care Centers Market Size, Status and Forecast 2018-2025” which offer details about the current trends and analysis, as well as scope for the near future. This research study also covers information about the production, consumption and market share
10-04-2017 | Business, Economy, Finances, B …
Market Research Reports 2017
Bakeware Market Share 2017-2022 Kaiser Bakeware, Knightsbridge Bakeware Centre
Global Bakeware Market Research Report 2012-2022 A recent market study on "Bakeware Market" over the global and major regions, from angles of manufacturers, product types and end industries. This “Bakeware Market” research study involved the extensive usage of both primary and secondary data sources, The report on the global Bakeware market uses the top-down and bottom-up approaches to define, analyze, and describe the market trends and market size estimation
05-26-2017 | Media & Telecommunications
Market N Reports
Global Sports & Action Cameras Market - Sony, Kaiser Baas, Panasonic & Sioeye
The market study on Global Sports & Action Cameras Market 2017 Research Report studies current as well as future aspects of the Sports & Action Cameras Market primarily based upon factors on which the companies compete in the market, key trends and segmentation analysis. This report covers each side of the worldwide market, ranging from the fundamental market info and advancing more to varied important criteria, based on that, the
09-05-2014 | Business, Economy, Finances, B …
Russell Bedford International
Kaiser Scherer & Schlegel joins Russell Bedford US network
International accounting group Russell Bedford has extended its presence in the United States with the addition of a new Washington DC member firm - Kaiser Scherer & Schlegel, PLLC - based in McLean, Virginia. Established 35 years ago, Kaiser Scherer & Schlegel (KSS) is a full-service CPA firm with eight principals, including three equity partners: Elizabeth Kaiser, Ned Scherer and Jeff Schlegel. Many of the firm's principals and staff
Comments about openPR
9 o'clock: discuss press release with client, 10 o'clock: submit release to openPR, within the briefest possible time release is published and displayed in a prominent place on openPR.de. I am thrilled!
Zehra Spindler, Calypso Now! - Communication Agency