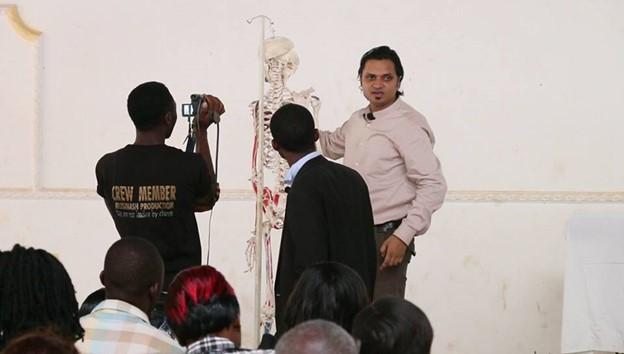 Owning intellectual properties like 140+ books and 30+ bestsellers seem like an old age retirement dream to most authors. But there is an individual who has created them at the age of just 35 years. This young professor hails from a small-town- Muhammadabad Gohna, in District Mau of Uttar Pradesh State in India. After earning his professional degrees in India, he moved to other countries for further exposure. His prolific record helped him climb the ladder of academic faster and made him the Youngest Vice-Chancellor in the world (2017). He holds 8 world records, all related to intellectual properties. He is the 1st Indian to develop his own school of thought in manual therapy that made into any national curriculum. His technique “Krishna’s Kinetikinetic Manual Therapy (KKMT)” became part of the National curriculum (HPD) by the Ministry of Higher Education, Cameroon, in the year 2016. His lectures are bought by over 50,000 students in more than 170 countries. He realized the potential in music after his first break from Zee Music Company. Since then, he has released over a dozen songs under his own music label - Glare Music International. He counts six things that motivate him to keep producing intellectual properties- 1) Intellectual Satisfaction, 2) Financial Freedom, 3) Time Freedom, 4) Geographic Independence, 5) Peer Recognition, and 6) Peace of Mind. “It allows me to travel and spend time the way I want. The love I get from the students is icing on the cake”, he adds. Dr Sharma dedicates a lot of his time to three major projects- Higher Education Consultancy, Virtued Academy International, and News with Nation (news portal).You can contact Prof. Sharma here: Prof. Krishna N. Sharma Kampala Road, Kampala, Uganda. Email: me@drkrishna.co.in Cont: +256778866339Prof. Krishna N. Sharma is a higher education consultant.

02-06-2019 | Science & Education
Banasthali
Kavi Yogendra Sharma gives a Scintillating Start to ZERONE Banasthali
Zerone is not just a word or slogan or jargon but a Philosophy which tells that it does not matter if one starts at zero but no one can stop you from becoming number one. The Chemical engineering department of Banasthali came into operation in 2008 and Innovative Chemical Engineers - ICE Club has been organizing various events round the year which includes ZERONE (Discovering the Undiscovered) a three day
03-05-2018 | Science & Education
Goldmine Adv ltd
Manoj Sharma conferred with "Bharat Shri" Award in Public Relations
New Delhi: National Human Welfare Council (NHWC) felicitated talented professional in various fields with "Bharat Shri" award on Sunday for outstanding contribution in their respective fields. The Director (PR) of Goldmine Advertising Ltd. Mr Manoj Kumar Sharma was awarded "Bharat Shri" for his outstanding contribution in the field of Public Relations. The award was presented to Manoj Sharma by Lt. Gen.(Retd.) Raj Kadyan, the Chief Guest of the occasion at
04-11-2017 | Industry, Real Estate & Constr …
FridayMoviez
Anushka Sharma receives a legal notice from BMC
Celebrities entering into legal mess with the BMC officials is not a new thing now. After Kapil Sharma and Arjun Kapoor were accused of illegal construction in their respective apartments, it is now Anushka Sharma who has landed into such trouble. BMC has issued a legal notice to the actress for installing a electric junction box on her floor which is illegal. A neighbour filed a complaint against her after
05-21-2012 | Tourism, Cars, Traffic
iXiGO
iXiGO.com appoints Abhishek Sharma as VP, Operations & Product Platform
iXiGO.com expands leadership team to drive the next phase of growth New Delhi, May 17th, 2012: iXiGO.com, India’s leading travel search engine announced the appointment of Abhishek Sharma as Vice President, Operations & Product Platform. In this role, Mr. Sharma would be responsible for driving the company’s operations, product platform and content strategy as a part of its management team. Prior to joining iXiGO.com, Mr. Sharma’s professional experience spans across 13
10-07-2011 | Science & Education
JMA Pilani Rajasthan
Vanam Sharma Brings Laurels for JMA Pilani in Sports
Located in the heart of Shekhawati region of Rajasthan, Pilani is well known in India today for various top ranking educational institutions, CSIR Laboratory CEERI as well as the upcoming BrahMos Missile Assembly Project unit. Jamuna Mishra Academy – JMA established in the year 2004 which has been making rapid strides in early childhood education is presently one among the top ranking and most sought after schools at Pilani Rajasthan. JMA
06-22-2011 | IT, New Media & Software
Astellia
Astellia appoints Rajesh Sharma as VP Sales & Customer Operations
Rennes, France – 20th June 2011 – Astellia, leading provider of monitoring solutions for the optimization of mobile network QoS and performance announces today the appointment of Rajesh Sharma to the position of Vice President Sales and Customer Operations. He will lead all sales activities, operations and customer service to drive Astellia’s expansion into new markets and growth in its customer base. Rajesh Sharma brings with him more than 15
Comments about openPR
OpenPR ist the nicest and most clearly laid out PR platform I have seen to this day. The press releases are displayed very nicely and clearly and without any unnecessary frills. The updates are fast and the finished release looks appealing and is clearly legible. Even with 16 years of experience one discovers new things from time to time. Congratulations!
Gabriele Ketterl, Director Marketing & PR, Menads