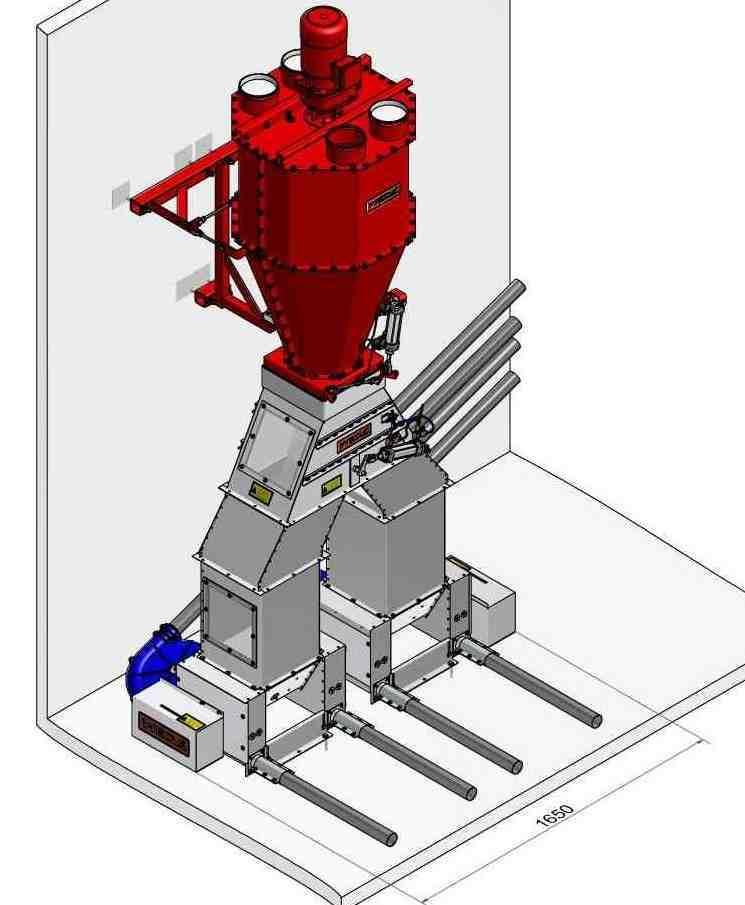 The “TM 100”. WEDA introduces the first dry mixer worldwide, which is able to distribute pigs’ feed to four circuits.

The company of WEDA Dammann & Westerkamp GmbH at Lutten introduces the worldwide first dry feeding system onto the market by means of which pigs’ feed can be distributed into four feed circles from a compact mixer. The dry feed mixer (TM) is available in the versions of “TM 100” and “TM 40” and takes up 40 or 100 kg per mixing process. By means of this robust device, various feed mixes can be filled in after another and can be fed out in two parallel running lines at the same time. The innovative WEDA technology thus ensures an efficient multi-phase feeding process: with the aid of the “TM” the running times of the feed chains are clearly shortened while the throughput of the feed is increased. This way it is now possible to construct the mixing unit in such a way that the feed centre requires just one feeding interval and that feeding does not have to take place twice a day. The WEDA mixer, however, also saves costs as less devices will be required for the processing of the feed amount. By the simple upgrading from the 40-kilo to the 100-kilo version, a lot of time is saved in the feeding process – especially when the established 80-kilo mixes are fed out.With the development of the feeding distributor, the Lower Saxon market leader relies on the modular construction of the proven WEDA components with just a small “foot print”. Therefore, - besides the costs – pig farmers also save space inside the animal house by the use of the WEDA mixer. The dimensions of the stationary system are compact so that the four feed lines can be charged in a space saving way. Both systems only require a floor space of approx. 1.65 m x 1.65 m. Already available WEDA units can be problem-free converted into the TM system.The construction of the filling hopper guarantees a high degree of feed hygiene as there are no parts on the inside of the hopper which form an obstacle by encouraging the formation of feed bridges. The cleaning also becomes easier this way; the dry mixer of WEDA can be simply washed out with water and without the addition of cleaning agents.For more than 70 years, WEDA’s name stands for innovation and reliability. Originally founded as an enterprise for the manufacture of wood gas generators, Dammann & Westerkamp GmbH (WEDA) have meanwhile become global market leaders in the domain of liquid feeding with more than 130 members of staff at their headquarters at Lutten. The WEDA company owns locations in almost 50 countries on all continents.In their function as full providers in the field of modern pig managements, WEDA – besides the domains of feeding technology and house equipment – also attend upon the segments of ventilation technology and liquid manure treatment. WEDA possess more than two dozens of patents.In 1996 – as the first enterprise of the branch – WEDA received the certification according to the international quality standards, DIN EN ISO 9000 ff. In 2001, the companies of WEDA and of Erich Stallkamp ESTA GmbH founded the WELTEC BIOPOWER GmbH enterprise.WELtec BioPower GmbH Carsten Bergstedt Head of Marketing Am Bahnhof 10 49424 Lutten Phone: +49 4441.8705.65 Email: c.bergstedt@weda.de

You can edit or delete your press release A Global First: WEDA Dry Feeding Mixer Feeds out Fourfold here