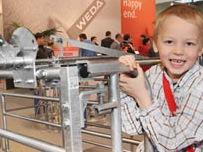 In the current Ranking of the German Agricultural Society (DLG) WEDA is part of the circle of image leaders.

For 16 years now, the German Agricultural Society (DLG) has been investigating the image of agricultural enterprises. In November, the 2011 industry barometer was published. In the current ranking, the company of WEDA Dammann & Westerkamp GmbH who has been continuously improving is now sharing the third position of the category of “Technology
in Animal Management” with the Swedish enterprise of de Laval. In the category “Pig Management“, WEDA even achieved the second place. Last year, the full-range providers from Lower Saxonian Lutten, still ranged on place five in the overall result.

Consequently, the increase of almost four per cent as opposed to the previous year is positively evaluated by WEDA’s marketing director, Carsten Bergstedt: „This placing indicates that we have gained profile and are now part of the circle of image leaders within the agricultural branch. Normally, large-scale enterprises which are known and acclaimed around the globe play in this league”. Our current success is also the result of a finely tuned presentation to the outside world and of a close cooperation with the media and boards. „The essential factors for a good reputation inside the branch are innovative and high-quality products as well as worldwide established marketing and service”, emphasizes Carsten Bergstedt.

For the investigation, 291 farmers were interviewed during a telephone survey, which was carried out by the market researchers of the Kleffmann Group in Lüdinghausen on behalf of the DLG. The panel structure in per cent: crop farmers (33), milk producers (32), pig farmers (33), and poultry producers (6). In the process, amongst others the information was collected which enterprises were estimated as being “particularly positive” and “particularly innovative”, and who advertises in an “especially positive” or “imaginative” manner. In the categories of the current ranking, WEDA clearly listed more entries than in previous years.

You can edit or delete your press release DLG Ranking: WEDA rises to the Top Three here