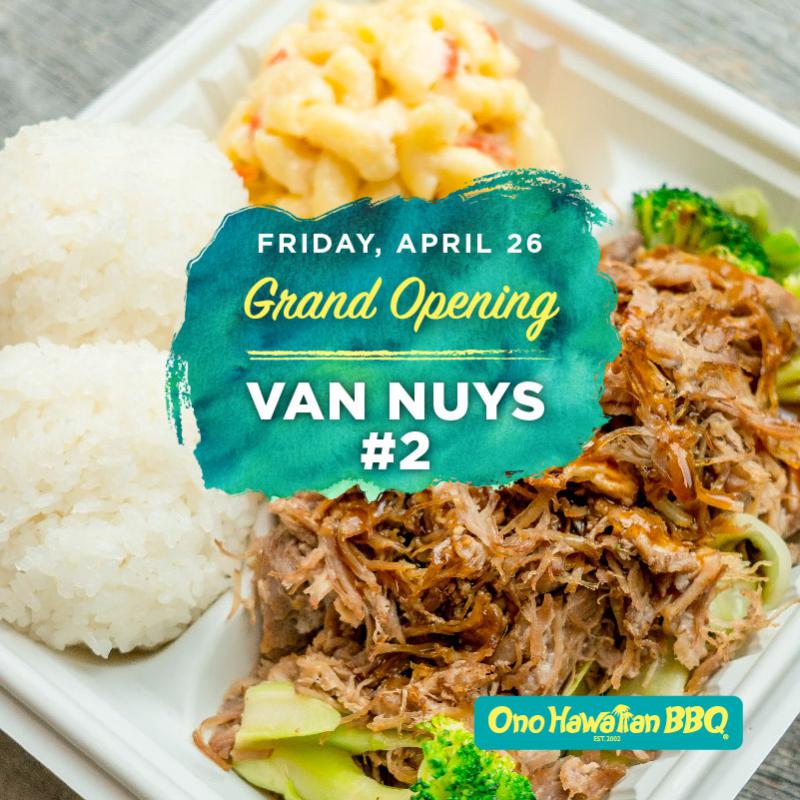 Ono Hawaiian BBQ,, well-known for its island-inspired Hawaiian plates, continues its expansion in Southern California with the opening of the brand's 84th restaurant located near the Woodley recreation area. To celebrate their latest Van Nuys location, Ono Hawaiian BBQ invites the public to a luau celebration on Friday, April 26th. The fun filled day will commence with a ribbon cutting ceremony at 10:45 a.m., followed by a raffle from 11:00 a.m. to 1:00 p.m. at which time fifty $100 gift cards will be given away. Attendees will also be treated to Hawaiian dance performers from 11:30 a.m. to 1:30 p.m., along with a buy one, get one free offer on all food items throughout the day. “We are excited to grow Ono Hawaiian BBQ’s presence in the San Fernando Valley with our second Van Nuys restaurant,” said Joshua Liang, Chief Executive Officer of Ono Hawaiian BBQ. “Our new location is conveniently located near the 405-freeway allowing us to not only serve our fresh made-to-order barbecue to the neighborhood but also commuters passing through, while giving them the chance to experience the amazing community of Van Nuys.”Ono Hawaiian BBQ’s core menu features Hawaiian-inspired plate lunches and island specialties like Hawaiian BBQ Chicken, Spam Musubi and Chicken Katsu made through a fusion of flavors. The interior design incorporates an inviting, yet industrial chic-feel inspired by Hawaii’s rustic elements including reclaimed wood walls, rope lighting, aqua tiles and tropical planters. The newly opened Ono Hawaiian BBQ is located at 6171 Sepulveda Blvd, A-4, Van Nuys, CA 91411 and will operate Sun-Thurs from 11:00 a.m. to 9:00 p.m. and Fri-Sat 11:00 a.m. to 9:30 p.m. For more information, please call 818-616-4788 or visit http://www.OnoHawaiianBBQ.com/.About Ono Hawaiian BBQ: Ono Hawaiian BBQ is a fast-casual restaurant concept with locations in California and Arizona, serving up “aloha in every bite” through its Hawaiian-inspired plate lunches and island specialties. Every Ono Hawaiian BBQ dish is created with fresh ingredients using authentic Hawaiian recipes, and made-to-order in each restaurant. Ono Hawaiian BBQ operates 84 restaurants throughout its two states of operation, with plans to open more in 2019. For more information, please visit http://www.OnoHawaiianBBQ.com/.6171 Sepulveda Blvd, A-4, Van Nuys, CA 91411