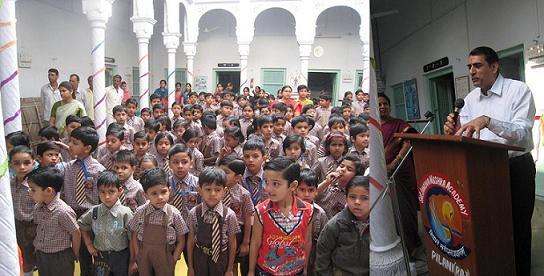 Established in the year 2004 JMA which has been making rapid strides in early childhood education is presently one among the top ranking and most sought after schools at Pilani Rajasthan.Pilani in the heart of Shekhawati region of Rajasthan is well known for various educational institutions, CSIR Laboratory CEERI as well as the upcoming BrahMos Missile Assembly Project unit. JMA which started in 2004 with an enrollment of 60 students for the Nursery, LKG, First Junior and Class1 has grown today till Class VIII with well over 8 times the enrollment. A noteworthy fact is that the girl student enrollment has been steadily rising every year in JMA and is presently close to 50% of total strength which itself is a matter of pride in a state which had alarmingly low record of girl’s education. The teacher strength at JMA also has grown from 5 in 2004 to 21 presently. The new session 2011 – 2012 had an auspicious start on April 01, 2011 with Dr Alok Tyagi renowned Pediatrician of Birla Sarvajanik Hospital Pilani as the Chief Guest who lit the traditional lamp amidst singing of Goddess of Learning Saraswati Vandana. Dr Tygai is well known at JMA as he has been coming for past several years to the annual medical camp of the school. Dr Tyagi in his speech appreciated the efforts by the Principal Smt Booma Natarajan and her team of Teachers for bringing quality education as well as discipline and citizenship attitude to the students of the school. Dr Tyagi who is in the process of relocating to Delhi from Pilani took pride in stating that his own children who were students of JMA School had emerged as top performers in a well known Delhi school admission test where children from various parts of India were competing for entry.It is a matter of pride that this year over a hundred new children have taken admissions to JMA which itself is a record for the school. The new students were introduced to the teachers and senior students. With the reciting of Gayatri Mantra and distribution of sweets and hugging and handshake among seniors and freshers, the new session indeed had a memorable start.The parents of freshers who had come for the function left with beaming faces and pride that they were part of an institution which is a jewel in the crown among the schools at Pilani. For more details about JMA Pilani see http://www.jma-pilani.page.tl/About JMA Pilani: Smt Jamuna Mishra Academy - JMA Pilani is a Co-educational English Medium School with Experienced Teachers, Spacious Classrooms and Modern Amenities Designed to impart Quality Education combined with All Round Personality Development and lay the Best Foundation for the Child's Future. For more details about JMA Pilani see http://www.jma-pilani.page.tl/Smt Booma Natarajan, MSc , MA, BEd. Principal Jamuna Mishra Academy - JMA Near Old Pilani Post Office Atma Ram Padia Marg Pilani Rajasthan 333031 India Phone 91-1596-242314 Email: booma_pilani at yahoo.co.in Website http://www.jma-pilani.page.tl/