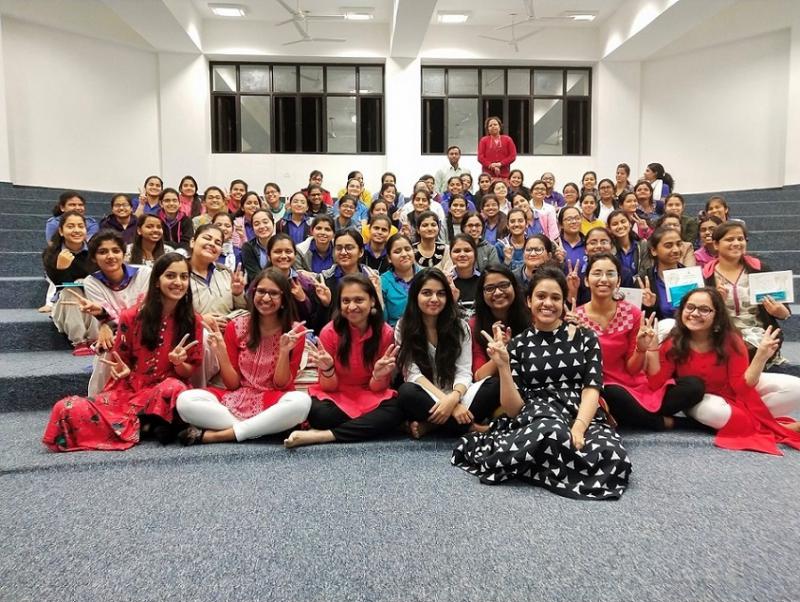 After reading the quote “Those who know nothing of foreign languages know nothing of their own” by Johann Wolfgang von Goethe, no one will underestimate the importance of learning foreign languages. Round the year, Banasthali offers to students several foreign languages which include German and French at certificate, diploma as well as advanced diploma level. German all along has been a popular choice by students for the past several years. “Das Sternbilderfest” is the German Language Fest held every year at Banasthali and following the tradition, this year the fest was celebrated during 22 – 24 Feb 2019 by the students of German Language Section of Department of English and Modern European Languages. Like in the previous year three major events namely German poem recitation, quiz based on DACHL countries (German speaking countries which include Germany, Switzerland, Austria and Liechtenstein) and Poster / Cartoon making were conducted this year also. The preliminary written round for Quiz competition was held on 19 Feb 2019. Poem recitation by Certificate Course students was held on 22 Feb 2019 and poem recitation by Diploma and Advanced Diploma course students was held on 23 Feb 2019.More than 200 enthusiastic students participated in all the three events. On last day the quiz final was organized and it covered pictorial presentation, crosswords, guessing, Bollywood songs in German, tongue twisters and many more interesting activities. The fest concluded with sharing of experiences by the ex-students of German language and faculty members Dr Geeta Bisla, Dr. Lakshmi Gupta and Ms. Shaivalini Singh. Mr. Ankit Burnwal (Research Associate in German) recited self composed poem in Hindi. Prof. Hamsavahini Singh congratulated the students and encouraged them to opt for foreign language. Her quote of the famous Czech proverb, “You live a new life for every language you speak. If you know only one language, you live only once” drew a thunderous round of applause. She also shared her views on the importance of foreign languages in higher education and for job opportunities. The Program concluded with prize and certificate distribution. Poster Making first prize was bagged by Neha Bhandari while second prtize went to Mansi Gupta Course) and third prize to Mansi kumara Sinha all certificate course students. The Consolation Prizes for poster making were given to certificate course students Ishi Gupta, Palak Rai and Linchika Terenpi. Cartoon making first prize went to Yogyata Kumari, second prize to Pihu and third prize to Isha. The consolation prizes for cartoon making were given to certificate course students Pooja singh and Komal yadav. For Poem Recitation, Certificate Course students Kanishka Gupta, Muskan Agarwal and Sumitra Singh bagged the first, second and third prizes respectively while the consolation prize went to Aditi Trivedi and Tanusha Bhati. For Poem Recitation Diploma Course first prize went to Aditi Garg, second prize to Nanditia Hans and third prize to Nikita Singh. For Poem Recitation Advanced Diploma Course first prize was bagged by Sejal Garg and second prize by Sneha Dhama.For Quiz Competition Winners were Sejal Garg ( Advanced Diploma ), Pragya Shukla (Diploma) along with certificate course students Shivani Sharma, Varsha and Vaishali. For Quiz First Runner up included Aditi Dudeja and Swikriti from Diploma Course along with Shreya Kumari, Kashish Mittal and Tripti Mittal from Certificate Course. For Quiz Second Runner up from Diploma Course Ayushi Garg along with certificate course students Palak Rai, Muskan Agarwal, Neha Mishra and Yashika sardana.The beamimg faces of students and faculty who participated in Das Sternbilderfest at Banasthali conveyed that they were indeed part of an institution which is a jewel in the crown among the women’s universities not only in India today but across the globe.For more details about Banasthali see http://www.banasthali.org/About Banasthali: Established in 1935, the Institution which is also the largest fully residential women’s university in the world has played a big role in revolutionizing women’s education and empowerment in India for the last eight decades. Banasthali has scripted numerous success stories in a wide range of fields, and stands tall among the citadels of learning in India today. Proud to be Banasthali alumni who call themselves as Banasthalites can be found in all latitudes, longitudes and altitudes in all walks of life across the globe. Banasthali has the pride of being chosen as a Faculty Development Centre under the MHRD Govt of India Pandit Madan Mohan Malaviya National Mission on Teachers and Teaching (PMMMNMTT) as well as for hosting Atal Incubation Centre (AIC) by NITI Aayog Apart from various National Rankings which include India Today #2, FICCI University of the year 2015, NAAC A grade, MHRD NIRF 29, in recent past, Banasthali has been in national and international media attention for getting Quacquarelli Symonds QS Asia University Ranking, QS BRICS Ranking, Diamond status under QS i-Gauge Indian University Rating and the overall Four Star Ranking in - QS Stars Rated for Excellence with 5 Stars for each for Teaching, Employability, Facilities, Arts & Culture and Inclusiveness.Banasthali Vidyapith Banasthali Rajasthan – 304022 Phone 91 1438 228456 / 228341 Email: info@banasthali.ac.in Website: http://www.banasthali.org Facebook: www.facebook.com/Banasthali.org