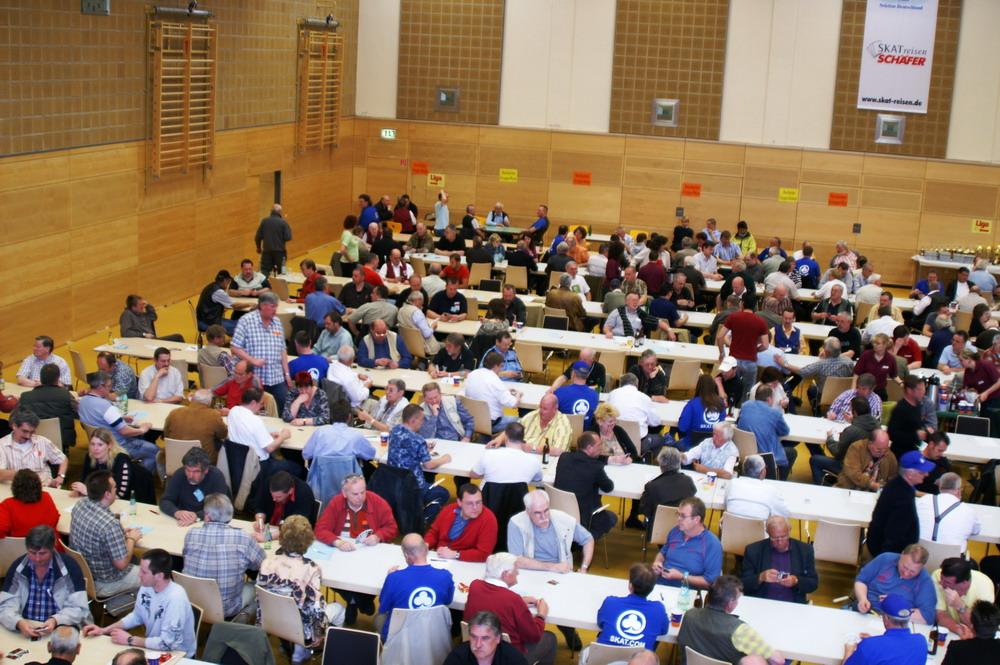 Impression of the German Mastership by Lutz, Ruebe (ISPA)

Magdeburg – Over the long weekend of the 4. Mai more than 1.000 Skat players filled the Mittelland hall in Barleben. The tournaments of the 30. German Mastery and the 27. open International German Single Mastership were held by the International Skat Players Association, ISPA Germany. Patrons of the Games were the 1st Barleber Skat sports club e.V. and the Skat club "Burger Ihleskater", whose good organization together with the voluntary helpers of ISPA arranged for an unobstructed Skat event. Initially the former estate was occupied by the teams. They gambled for the places of the 1st and 2nd German League, the League Cup and the goblet round. 76 teams participated only for the League Cup, among them 12 Skat players, supported by a found of www.skat-turniere.de and www.skat.com. From Saturday the fight was on the Single Mastership. All ISPA and DSKV members were allowed to start. After the welcome held by the ISPA Germany president Uwe Roettig, 4 series were played. In between, the quadrangle of the Sport- and cultural center offered excellent catering and many opportunities to exchange on the games. On Sunday the last two series of this excited competition were played. Here an overfew on the Single Masters: German Mistress is Angelika Pullig, German Senior forewoman Christa Reinhardt, German Master is Holger Bareit and German Senior foreman Peter Craemer. An additional bonus of 560,--Euro value for participation in the Skat-Online League´s Skat week was set in the German Youth Mastership. With 44 point Steffen Wollwage triumphed in front of Andrea Stolze and picked up title and voucher.SkatMedia Hasselhecker Straße 22b 61239 Ober-MörlenSkatMedia supports Skat sport and the portal www.skat.com , where every interested person can get a lot of information about Skat, independent of a club or players location. Here you can find more about the rules, get downloads or solve some Skat lessons. You can get hints on special Skat situations or learn from experienced players in the forum. The portal provides software for associations and clubs to create, maintain and administer own homepages. The platforms www.skat-online.com and www.skat-en-deux.com offer free of charge Skat games around the clock. In the Skat-Shop special Skat programs for PC are available. The portal Skat.com is since May 1998 online. The platform Skat-Online.com has more than 170.000 registered players (Ref. Sept. 2007) and is one of the biggest worldwide. In average 2,6 Million games (Ref. Sept. 2007) are played each month. Additionally, the Skat-Online League for single and team competition is offered. Self-dependent providers organize tournaments. More than 750 organized and accompanied tournaments were played during 2006. Others: www.ispaworld.org , International Skat Players Association, platform for Skat players from all over the world www.skat-turniere.de , internet tournament organizer

10-03-2011 | Sports
SkatMedia
First Online Skat World Champion by ISPA-World
During the final of the 16 best, in which all players had to play against each other, Dominik Scholz came out on top. The 25 year old man from Berlin wan the title with two table points distance to Thomas Kinback from Alzey, Germany. With 5110 player points Senad Seferovic reached the third place. The finalists qualified over the year 2011 in 12 tournaments on Skat-Online.com . On Friday, 30.
09-14-2010 | Sports
SkatMedia
First Online-Skat World Championship
The International Skat Players Association is arranging an open Online-Skat World Championship. Registration has already started. „We have found partners, enabling us to invite a large number of players. We hope to receive wide interest globally on this Online-Skat championship“, says Rainer Grunert, president of ISPA-World. Through Online-Skat an international participation in the championship is less expensive for everyone. Besides this, the world association hopes to motivate young players with this decision. Thomas
12-03-2008 | Leisure, Entertainment, Miscel …
SkatMedia
Last direct qualification at Skatfestival 2008
The 4th SeePark Skatfestival sustained again position in 2008. After all, the nation wide Skat event was the last possibility to qualify directly for Skatropoly. For this reason more than 145 players have registered in Kirchheim although the final round of the German city cup was held in Oyten in parallel. In addition 16 participants recorded for different daily evaluations in advance. Through the last November weekend a 9 series
08-20-2008 | Sports
SkatMedia
More Vouchers for Skatropoly
The most thrilling Skat week of the year 2008 was possibly carried out at SeePark Kirchheim. More than 180 Skat players came together to qualify directly by one of the three places of SeePark-Cup or the 5th open German Single Mastership of the Skat-Online League for the final round of Skatropoly. Skatropoly is a extraordinary Skat contest. For the first time the 36 final players will be identified online and offline.

09-14-2010 | Sports
SkatMedia
First Online-Skat World Championship
The International Skat Players Association is arranging an open Online-Skat World Championship. Registration has already started. „We have found partners, enabling us to invite a large number of players. We hope to receive wide interest globally on this Online-Skat championship“, says Rainer Grunert, president of ISPA-World. Through Online-Skat an international participation in the championship is less expensive for everyone. Besides this, the world association hopes to motivate young players with this decision. Thomas
07-18-2008 | Leisure, Entertainment, Miscel …
SkatMedia
Skat week under prominent tournament execution
In a little while he has to pack his bag again. For 11th until 17th August is the Skat event in SeePark Kirchheim next. Hans Cordes, living in Bremen, rubs his hands. „This will be a thrilling week in Hesse“, he says full with anticipation. Many excellent Skat players are expected to join the Skat week, because the first three places of the SeePark-Cup and the three best positions of
06-05-2008 | Leisure, Entertainment, Miscel …
SkatMedia
Skat week signed by young talents promotion
Kirchheim/Hessen – This year´s Skat week offers different highlights to the participants. From the 11th until the 15th August the conference hotel in Kirchheim is scene of the SeePark-Cup. Additionally the first three places of this 12 series tournament are directly qualified for Skatropoly, a Skat competition pairing online Skat and classical tournament arrangements. The weekend is then dominated by the 5th open German Single Mastership of the Skat-Online League, playing
02-27-2008 | Leisure, Entertainment, Miscel …
SkatMedia
Winner of Bad Fuessing Skat festival qualified
The days of the 11th to the 15th February was a week full of events for the participants of the 5th International Skat festival. The initiative of spa manager and mayor filled the big hall of Bad Fuessing with more than 150 activated Skat players for a competition over five days. The tournament was organized by www.skat-international.de under supervision of Hans Cordes and was one out of four possible Skat
01-25-2008 | Leisure, Entertainment, Miscel …
SkatMedia
New Skat contest consequences higher server capacity
Early January Skat-Online.com counted more visitors than ever. To live up to the enormous demand, Skat.com increased its server capacity. A comprehensive communication across the servers is a special service. „The players can chat overall servers. If they decide to play Skat on the same table they can easily change the virtual room. Linking the servers was a big technical step forward compared to other providers“, said Markus Riehl, Skat.com´s
12-14-2007 | Leisure, Entertainment, Miscel …
SkatMedia
Rainer Seidel wins 3. SeePark-Skat festival
Many skat freaks met the first advent weekend to reach a decision in the win of the Skat festival 2007. Venue was the recreation center SeePark in Kirchheim. 130 Skat players completed three whole days, one after another with three series, so that the winner of the battle was ascertained Sunday afternoon: Rainer Seidel. Johnny Winter reached the 2nd place, followed by „old stager“ Horst Schaefer. The tournament was decorated
Comments about openPR
9 o'clock: discuss press release with client, 10 o'clock: submit release to openPR, within the briefest possible time release is published and displayed in a prominent place on openPR.de. I am thrilled!
Zehra Spindler, Calypso Now! - Communication Agency