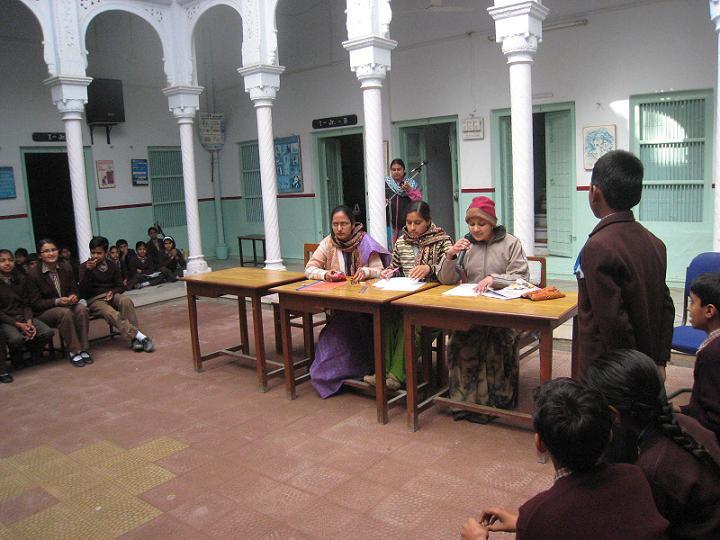 Established in the year 2004 Smt Jamuna Mishra Academy – JMA which has been making rapid strides in early childhood education is presently one among the top ranking schools at Pilani Rajasthan. Pilani in the heart of Shekhawati region of Rajasthan is well known for various educational institutions, CSIR Laboratory CEERI as well as the upcoming BrahMos Missile Assembly Project unit. JMA which started in 2004 with an enrollment of 60 students for the Nursery, LKG, First Junior and Class1 has grown today till Class VII with well over 6 times the enrollment. A noteworthy fact is that the girl student enrollment has been steadily rising every year in JMA and is presently nearing 50% of total strength which itself is a matter of pride in a state which had alarmingly low record of girl’s education. The teacher strength at JMA also has grown from 5 in 2004 to 18 presently. To popularize the benefits of scientific knowledge, 28th February is celebrated all over India as National Science Day – NSD to mark the discovery of Nobel Prize winning Raman Effect by the great Indian Physicist Sir C. V. Raman in 1928 on same day.Raman Effect is a phenomenon in spectroscopy discovered by the eminent physicist while working in the laboratory of the Indian Association for the Cultivation of science (IACS), Kolkata. After two years of this discovery, Sir C. V. Raman brought the first Nobel Award for India in 1930. Hence the NSD is a great day for Indian Science and scientific community. Celebration of NSD in schools helps inculcate scientific temper among children. It goes without saying that the daily application of science like the use of clean drinking water, knowledge to eradicate contagious disease, the know-how of various agricultural practices to increase crop production, the usefulness of Chemistry for the benefit of humanity, etc., ought to be disseminated to the future generation. JMA celebrated NSD with a talk by Principal Mrs Booma Natarajan and Science Teacher Mrs Anuradha Soni. The Principal urged the students and teachers to spread the message of importance of science and its application among the people and ensure that blind faith and beliefs in various sections of Indian Society is completely eliminated.For the four houses of the school namely Jupiter, Mercury, Neptune and Venus, quiz competitions were held in which students enthusiastically participated and the Neptune house emerged as winners. The quiz was conducted by Mrs Anuradha Soni, Mrs Sangeeta Jangir and Miss Poonam Saini.The students of Class V, VI and VII also demonstrated various science models made by them. The science exhibition was inaugurated by Shri Anand Padia Secretary of the School. The prizes for the best models were bagged by Gaurav Saini of Class V, Bhaskar Sharma of Class VI and Vishal Sheoran of Class VII.For more details about JMA Pilani see http://www.jma-pilani.page.tl/About JMA Pilani: Smt Jamuna Mishra Academy - JMA Pilani is a Co-educational English Medium School with Experienced Teachers, Spacious Classrooms and Modern Amenities Designed to impart Quality Education combined with All Round Personality Development and lay the Best Foundation for the Child's Future. For more details about JMA Pilani see http://www.jma-pilani.page.tl/Mrs Booma Natarajan, M.Sc., M.A., B.Ed. Principal, Jamuna Mishra Academy – JMA Near Old Pilani Post Office Pilani Rajasthan 333031 India Phone 91-1596-242314 Email booma_pilani at yahoo.co.in Website: http://www.jma-pilani.page.tl/