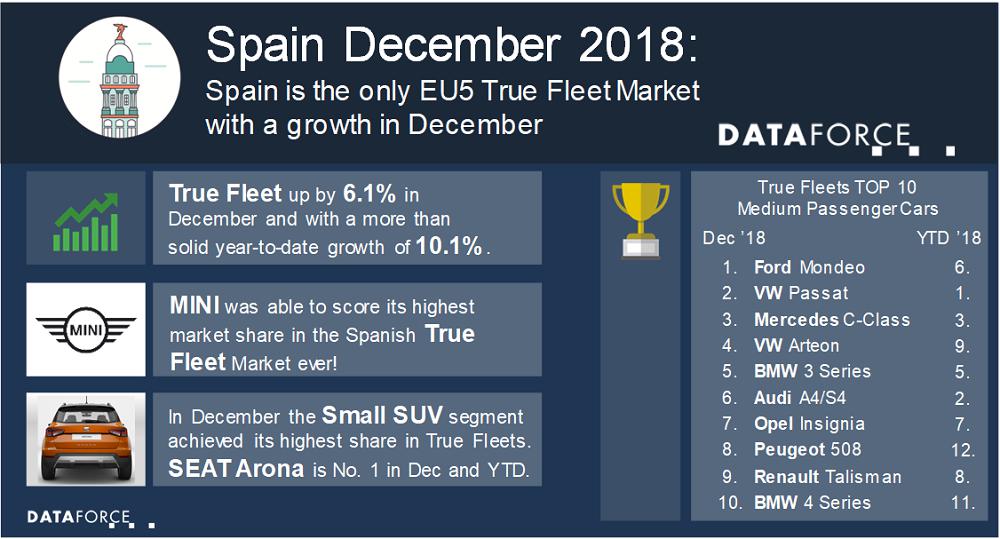 December 2018 showed a drop of 3.3% for the Spanish automotive market but the performance of the different channels was mixed. While private registrations were down by 10.0% over December 2017, True Fleets scored a very positive + 6.1%; in contrast to France, Germany, Italy and the UK where the fleet channel of each country was in the red. This result helped to secure a double-digit growth of + 10.1% for the Spanish Fleet Market for the full year 2018 and to achieve a new record-peak since Dataforce started the detailed recording of this channel from 2008! Despite the relatively poor December for the Private Market this customer group also achieved a positive year-to-date figure with + 3.8%. Registrations on Rental companies, Dealerships and Manufacturers were also up (+ 7.1% in December and + 10.6% YTD). With more than 1.38 million passenger car registrations the Spanish market achieved its highest volume since 2007.Brand performance Within the top ten brands there was not even one which kept its position from last year’s December. With + 34.4% Volkswagen took the lead followed by BMW who had a remarkable December, gaining no less than four positions thanks to an impressive + 59.4% which resulted in BMW’s highest market share since February 2013. Spanish fleets seem to have a particularly strong appetite for BMW’s “X” model range. X1, X3 and X5 all more than doubled their volume, the X4 grew by “only” + 72.2% and the all-new X2 was already 4th within the internal brand ranking, leaving behind the 1 Series and 3 Series.Renault dropped from rank number one into third position ahead of SEAT, Peugeot, Ford and Mercedes. Citroën and Toyota managed to achieve exactly the same number of fleet registrations in December (1,227 units to be precise) and Audi completes the top 10. Outside of this list were two brands that deserve a mention as well. Thanks to an impressive + 31.5% Volvo ranked 12th and achieved a market share of 3.5% which is the Swedish manufacturer’s best in the past eleven years! And MINI (16th, + 24.6%) even achieved its best ever True Fleets market share in Spain.Medium Passenger Cars: becoming a slow seller? One of the traditional, classic vehicle segments is coming under (volume) pressure: the market share for the group of medium size passenger cars was the lowest it has ever been before. This decline is not due to only a few models; it’s a more serious issue as no less than 11 out of the top 15 models had to face a reduced registration volume compared to December ’17! Hard to believe that Medium cars were the second-best segment until 2013, still in third position in 2016 and now ranking only sixth since July 2018. And the erosion of its share even seems to be accelerating.DATAFORCE – Focus on Fleets Dataforce is the leading provider of fleet market data and automotive intelligence solutions in Europe. In addition, the company also provides detailed information on sales opportunities for the automotive industry, together with a wide portfolio of information based on primary market research and consulting services. The company is based in Frankfurt, Germany.Gabriel Juhas Dataforce Verlagsgesellschaft für Business Informationen mbH Hamburger Allee 14 60486 Frankfurt am Main GermanyPhone: +49 69 95930-250 Fax: +49 69 95930-333 Email: gabriel.juhas@dataforce.de www.dataforce.de

01-18-2012 | Business, Economy, Finances, B …
Spreadshirt
Spreadshirt’s UK December Sales Rise by 49 %
London–18 January 2012–Spreadshirt (www.spreadshirt.co.uk), the leading multi-channel clothing commerce platform, continues to benefit from the growing shift to shopping on the web as it today announced its record-breaking December results. The company saw UK sales increase 49% year-on-year and an impressive 75% globally. The online e-commerce platform experienced profitable growth across all business units in 2011, with the increase in revenue primarily driven by developments in the North American market.
08-04-2011 | IT, New Media & Software
Aaris Internet Solutions Pvt Ltd
Twitter Valuations Climb Post December
Mumbai, INDIA: In the news for its growing fan following and increasing popularity, Twitter is also putting money where its mouth is. There is an increased interest in Twitter, and there are deals being struck which redefine the company as we speak. Twitter is on the brink of closing out an $800 million dollar deal, which is set to pave the way for future growth. The move is also an attempt
01-20-2011 | Arts & Culture
Artfact Live!
Artfact Live! December Auction Results Roundup
(Boston, MA) – Artfact Live! closed out 2010 on a high note thanks outstanding auctions from several of Artfact's Auction House Members. December's highlights include: Apple Tree Auction Center's Model Train and Railwayana auction on December 9th with more than 4,000 online bids totaling almost $200,000 in value; Alex Cooper Auctioneers' December 11th Guns, Books, Stamps and Pens auction with over 1,100 online bids; and Ewbank Clarke Gammon Wellers' three-day
01-12-2009 | IT, New Media & Software
Rising Antivirus International Pty Ltd
Rising Won VB100 Award in December 2008
December 05, 2008 - RISING, top security products vendor, announces that Rising Antivirus won the VB100 award in December 2008, making it the third similar honor since the company joined the Virus Bulletin antivirus product test. Virus Bulletin carried its antivirus product test on Microsoft’s Windows Vista X64 platform in December 2008. Using powerful and advanced security techniques, Rising Antivirus passed this test and won its third VB 100
11-26-2007 | Fashion, Lifestyle, Trends
DOPAMIN LIMITED
Fashion label DOPAMIN starts on 1 December
Young designers from England, Finland and Germany start their own independent fashion label – defying the rules of the fashion industry “I have always had a passion for fashion and always wanted to design clothes that will bring you out and have that unique part of what we all have” – says James, 17-year-old fashion designer from Norwich, UK. This credo has made him part of one of the hippest fashion
Comments about openPR
9 o'clock: discuss press release with client, 10 o'clock: submit release to openPR, within the briefest possible time release is published and displayed in a prominent place on openPR.de. I am thrilled!
Zehra Spindler, Calypso Now! - Communication Agency