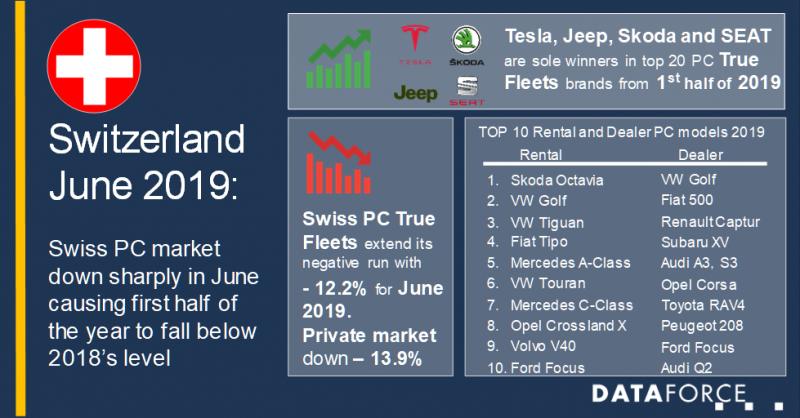 In June 2019 new passenger car registrations in Switzerland were down sharply on the same month last year. Nearly 28,000 registered passenger cars represent an overall market decline of 11.2%. Registrations of light commercial vehicles fell even more sharply (11.9%).Weak June causes passenger car market to fall below previous year's level Both the Private Market ( 13.9%) and the commercial market ( 8.4%) can look back on a weak June. A deeper look at the various commercial channels also paints a similar picture: The True Fleet Market suffered a 12.2% compared to the same month last year. While Short Term Rental registrations also fell by 13.6%, registrations in the dealer/manufacturer channel at least maintained the previous year's level (+ 0.2%).Half-year balance - Tactical trade registrations dominate market activity Due to the weak June, the overall market cumulated fell slightly below the previous year's level ( 0.8%). For the Private Market, a comparison with the prior-year period for the first half of 2019 shows a 4.3% decline in registrations. The True Fleet market fell by 9.3% in the same period, while Short-Term Rental registrations were almost exactly at the previous year's level. Unsurprisingly Dealer/Manufacturer registrations recorded extraordinary growth (+ 23.1 %). Also one of the possible explanations for some of the increase would be the new RDE tests that will come into force on September 1, 2019, which measure emissions in practical driving operations and will then become mandatory for all models from that date.True Fleet market: Volkswagen ahead of Skoda and BMW In the True Fleet market, Volkswagen defended first place in the importer ranking for the first half of 2019 despite a slight decline in volume ( 2.2%). With a market share of 12.8%, the Wolfsburg-based company was just ahead of its sister company Skoda (12.5%) and BMW (10.2%). Among the top 20 brands, four brands successfully defended themselves against the declining trend. Tesla (+ 232.9%), Jeep (+ 19.0%), Škoda (+ 15.9%) and SEAT (+ 14.6%) recorded significant growth over the same period last year.Light commercial vehicles with positive half-year results Even if the registrations of light commercial vehicles up to 3.5t had to put up with a small damper in June, this does not diminish the positive half-year results. With more than 20,800 registered vehicles a growth of 9.4% was achieved on the overall market at mid-year. In addition to the Private market (+ 13.6%), the commercial registrations from the True Fleet market (+ 5.2%) as well as registrations by Short-Term Rental companies (+ 34.6%) and Dealers/Manufacturers (+ 29.3%), were also able to record a greater growth here.Volkswagen also leads the importer ranking for light commercial vehicles in the True Fleet market with a market share of 19.0%. Ford, Mercedes and Renault follow closely behind with market shares of between 13% and 14%. Within the top 10 importer brands, Renault (+ 32.0%), Ford (+ 13.8%) and Iveco (+ 6.9%) have been able to achieve higher growth rates when compared with the same period of the previous year.(517 words; 3,181 characters)Christian Spahn Dataforce Verlagsgesellschaft für Business Informationen mbH Hamburger Allee 14 60486 Frankfurt am Main GermanyPhone: +49 69 95930-265 Fax: +49 69 95930-333 Email: christian.spahn@dataforce.de www.dataforce.deDATAFORCE – Focus on Fleets Dataforce is the leading provider of fleet market data and automotive intelligence solutions in Europe. In addition, the company also provides detailed information on sales opportunities for the automotive industry, together with a wide portfolio of information based on primary market research and consulting services. The company is based in Frankfurt, Germany.

12-16-2020 | Tourism, Cars, Traffic
Dataforce Verlagsgesellschaft für Business Informationen mbH
What is the Dataforce Sales channel outlook for 2021?
Following a contraction of around 26% in 2020 things can only get better. But how fast will the recovery be and what is the outlook for the channels? Slow start, rev up We expect the first half year of 2021 to remain rather challenging. Strict Containment measures will probably need to be maintained into spring, which will weigh down economic sentiment. At the same time, early 2021 may not be the best
09-02-2019 | Tourism, Cars, Traffic
Dataforce Verlagsgesellschaft für Business Informationen mbH
Generation change at Dataforce: Marc A. Odinius now sole owner and Managing Dire …
The long-standing Managing Director Marc Odinius has acquired all shares of the Dataforce Verlagsgesellschaft für Business Informationen mbH and is now Managing Director and sole owner of the Company. Mission of Dataforce As to the mission of the automotive data- and market-research company, with 87 Employees, counting 27 different nationalities who reside in Frankfurt, Rome and Beijing, Odinius stated: Dataforce is always in search of unique information which will make the automotive
07-24-2019 | Tourism, Cars, Traffic
Dataforce Verlagsgesellschaft für Business Informationen mbH
UK True Fleet continues to contract, finishing Q2 without a positive month
Now with the first half of the year having gone by in a blur of negative growth we can only hope that the second half will bring some more positive momentum especially around the plate change month in September. UK True Fleet produced a - 7.2% in June which leaves the channel down 6.2% year-to-date (YTD). The Private Market was also in the red with a 4.8% which
07-05-2019 | Tourism, Cars, Traffic
Dataforce Verlagsgesellschaft für Business Informationen mbH
German LCV Fleet Market with a strong performance in the first five months
Definition and development of the registration figures Since 2001, Dataforce has worked on providing the best clarity for the LCV market in Germany. The LCV market has two elements: registrations of commercial vehicles up to a weight of 7 tons as well as passenger car registrations of typical LCV models such as VW Caddy, Citroën Berlingo or Fiat Ducato. There were two further additions at the beginning of this year: on

05-02-2017 | Industry, Real Estate & Constr …
Keller Williams Coastal Estates- Heidi Theodore Realtor
Cultural Club Community Day on June 8th
Cultural Club Community Day Thursday- June 08, 2017 Keller Williams Coastal Estates Carmel is passionate about everyone living well on Monterey Peninsula. This year's project focus was chosen by Heidi Theodore and the KW Market Center based on a need Heidi seen within her community. To debut this year's community event, KW has chosen the VFW(Veterans of Foreign War) Post 8679. Cultural Club Community Day is an initiative dedicated to celebrating Heidi Theodore's commitment to improve local communities.
01-16-2017 | Energy & Environment
ReportsWorldwide
KENYA - POWER SECTOR ANALYSIS JUNE 2016
ReportsWorldwide has announced the addition of a new report title KENYA - POWER SECTOR JUNE 2016 to its growing collection of premium market research reports. This Report provides a comprehensive industry profile, analysis and outlook of Kenya’s Power Sector. Hydropower continues to dominate Kenya’s energy sector, however its share in the overall energy mix has decreased. In early 2016, total installed electricity capacity increased to 2,333MW. Total electricity generation expanded by 4.1%
07-14-2011 | Arts & Culture
Artfact Live!
Artfact Live! June Auction Results Roundup
(Boston, MA) – Online bidding at Artfact sizzled in June with six-figure sales of Asian Art at Czerny's International Auction House and individual online sale records at Tajan, Sloans & Kenyon, Quinns Auction Galleries, and McMasters Harris Apple Tree Doll Auctions to name a few. Artfact is also proud to announce the signing of exclusive live auction agreements in June with The Coeur d'Alene Art Auction, Decoys Unlimited, Gavelers Auctioneers
06-01-2011 | Advertising, Media Consulting, …
Leverage Marketing Group
June Is National Iced Tea Month
Reily Foods Company, the maker of Luzianne Iced Tea certainly knows how to celebrate a month practically created for them! From weekly free tea giveaways on Facebook and Twitter to a National Sweepstakes, Luzianne Tea has many events brewing to celebrate. Starting in May and ending June 30th, the celebration kicked off with a Facebook campaign geared to engage brand loyalists and newcomers alike to vote whether they are Sweet or
06-03-2010 | Arts & Culture
ActiMedia India
Music fest on Artistaloud.com this June
Paying an ode to different genres like Instrumental, Punjabi & Bengali along with independent artists Mumbai 3rd June, 2010: For all fans of ArtistAloud.com, the month of June is going to be a TREAT with music that promises to fulfill every listener's palette. Different genres will be highlighted every week starting with Instrumental followed by Punjabi, Bengali and finally showcasing the individual style of well known reality show contestants and winners.
08-31-2007 | Logistics & Transport
CMB NV
Consolidated accounts as per 30 June 2007
During its meeting of 30 August 2007, the Board of Directors of CMB approved the consolidated accounts as per 30 June 2007. This press release also refers to the one distributed on 26 July 2007. All figures in this press release have been prepared in accordance with IAS 34 Interim Financial Reporting as adopted by the European Union. * * * The prospects for the remainder of the year remain favourable. Bocimar has
Comments about openPR
We publish our press releases on openPR.de because we like people who are "open" - just like us.
Frank Obels, CEO, INCONET - Informationssysteme, Communication und Netzwerkberatung GmbH