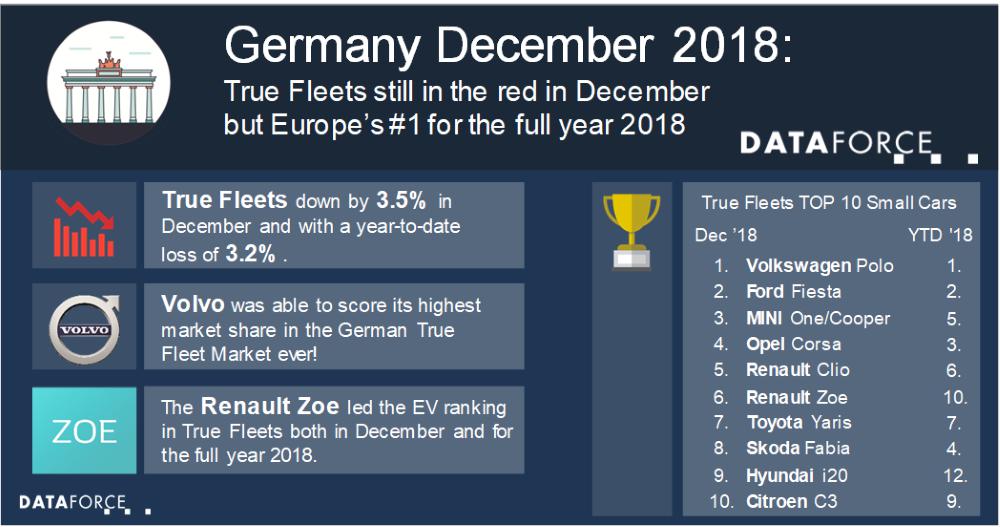 Since September 2018, delivery problems and delays in homologation due to the introduction of WLTP have hit the German automotive market. The consequences still remain visible in December with 237,000 new car registrations resulting in a drop of 6.7% for the German passenger car market. The biggest loss could be seen in private registrations with a decline of 12.8% over December 2018 while Special Channels’ volume fell by 2.9%. This was the outcome of a significant reduction of registrations specifically on both Dealerships and Manufacturer, thus overcompensating the rising amount (+ 14.7%) of car registrations on Rental companies.What about True Fleets? In the red for the fourth time in a row with – 3.5%, however this was at least a much smaller decline than seen in the previous three months. True Fleets’ loss of 3.2% for the full year 2018 is actually pretty close to the December figures, but the fleet industry shouldn’t be too disappointed as the reference for comparison (2017) was a record year. So, the fleet channel was far from underperforming and scored more than 800,000 units, only the third time this has been achieved since Dataforce records began. In addition, Germany was able to beat the UK for the first time since 2012 and to take the European fleet crown 2018! But, generous as I am, I can let our English readers know that there is a bit of solace for the United Kingdom, as it is still the biggest True Fleet market if you add light commercial vehicles.Brand performance The top three brands (Volkswagen, BMW and Mercedes) all kept their positions and increased their volume, especially VW with a strong + 12.9%. For the brand from Wolfsburg the Polo was shining with an impressive + 128.9%, scoring its highest volume ever for the month of December and its biggest market share within the Small Car segment in almost five years (January 2014).Audi had to face another drop but managed to keep its fourth position ahead of Ford who had a very good last month of the year with + 18.0%. This pushed Skoda into sixth position, who were followed by Opel, Volvo, Renault and SEAT. Looking closer into Volvo we saw a + 35.9% for the Swedish brand, not only achieving the highest growth rate in the top ten but also its best ever market share in the German True Fleet Market (3.2%). The new XC40, the XC60 and the Medium Station Wagon V60 all supported this outstanding performance.Fueltype performance For the full year 2018 the loss for Diesel (- 12.4%) and the growth for Petrol (+ 12.6%) were almost equal in terms of percentage. That was different in December when Petrol was down by 9.7% and Diesel up by + 1.7%. December wasn’t a particularly successful month for the Alternative powertrains. Hybrids were down by 11.8% and the full electric vehicles even suffered by – 28.1%. But you must take into consideration that EVs reached a record share in December 2017.Nevertheless, some EVs performed really well. Renault’s Zoe increased its volume by + 50.6% and this helped the French car to secure the 1st place in the EV ranking with a lead of 130 units (full year) over BMW’s i3. Furthermore, the Zoe ranked sixth in the Small Car segment ahead of the competitors Toyota Yaris, Skoda Fabia, Hyundai i20 and Citroen C3 in December. Well done Renault!(569 words; 3,287 characters)Publication by indication of source (DATAFORCE) and author (as listed below) onlyDATAFORCE – Focus on Fleets Dataforce is the leading provider of fleet market data and automotive intelligence solutions in Europe. In addition, the company also provides detailed information on sales opportunities for the automotive industry, together with a wide portfolio of information based on primary market research and consulting services. The company is based in Frankfurt, Germany.Michael Gergen Dataforce Verlagsgesellschaft für Business Informationen mbH Hamburger Allee 14 60486 Frankfurt am Main GermanyPhone: +49 69 95930-231 Fax: +49 69 95930-333 Email: michael.gergen@dataforce.de www.dataforce.de

01-18-2012 | Business, Economy, Finances, B …
Spreadshirt
Spreadshirt’s UK December Sales Rise by 49 %
London–18 January 2012–Spreadshirt (www.spreadshirt.co.uk), the leading multi-channel clothing commerce platform, continues to benefit from the growing shift to shopping on the web as it today announced its record-breaking December results. The company saw UK sales increase 49% year-on-year and an impressive 75% globally. The online e-commerce platform experienced profitable growth across all business units in 2011, with the increase in revenue primarily driven by developments in the North American market.
08-04-2011 | IT, New Media & Software
Aaris Internet Solutions Pvt Ltd
Twitter Valuations Climb Post December
Mumbai, INDIA: In the news for its growing fan following and increasing popularity, Twitter is also putting money where its mouth is. There is an increased interest in Twitter, and there are deals being struck which redefine the company as we speak. Twitter is on the brink of closing out an $800 million dollar deal, which is set to pave the way for future growth. The move is also an attempt
01-20-2011 | Arts & Culture
Artfact Live!
Artfact Live! December Auction Results Roundup
(Boston, MA) – Artfact Live! closed out 2010 on a high note thanks outstanding auctions from several of Artfact's Auction House Members. December's highlights include: Apple Tree Auction Center's Model Train and Railwayana auction on December 9th with more than 4,000 online bids totaling almost $200,000 in value; Alex Cooper Auctioneers' December 11th Guns, Books, Stamps and Pens auction with over 1,100 online bids; and Ewbank Clarke Gammon Wellers' three-day
01-12-2009 | IT, New Media & Software
Rising Antivirus International Pty Ltd
Rising Won VB100 Award in December 2008
December 05, 2008 - RISING, top security products vendor, announces that Rising Antivirus won the VB100 award in December 2008, making it the third similar honor since the company joined the Virus Bulletin antivirus product test. Virus Bulletin carried its antivirus product test on Microsoft’s Windows Vista X64 platform in December 2008. Using powerful and advanced security techniques, Rising Antivirus passed this test and won its third VB 100
11-26-2007 | Fashion, Lifestyle, Trends
DOPAMIN LIMITED
Fashion label DOPAMIN starts on 1 December
Young designers from England, Finland and Germany start their own independent fashion label – defying the rules of the fashion industry “I have always had a passion for fashion and always wanted to design clothes that will bring you out and have that unique part of what we all have” – says James, 17-year-old fashion designer from Norwich, UK. This credo has made him part of one of the hippest fashion
Comments about openPR
We publish our press releases on openPR.de because we like people who are "open" - just like us.
Frank Obels, CEO, INCONET - Informationssysteme, Communication und Netzwerkberatung GmbH