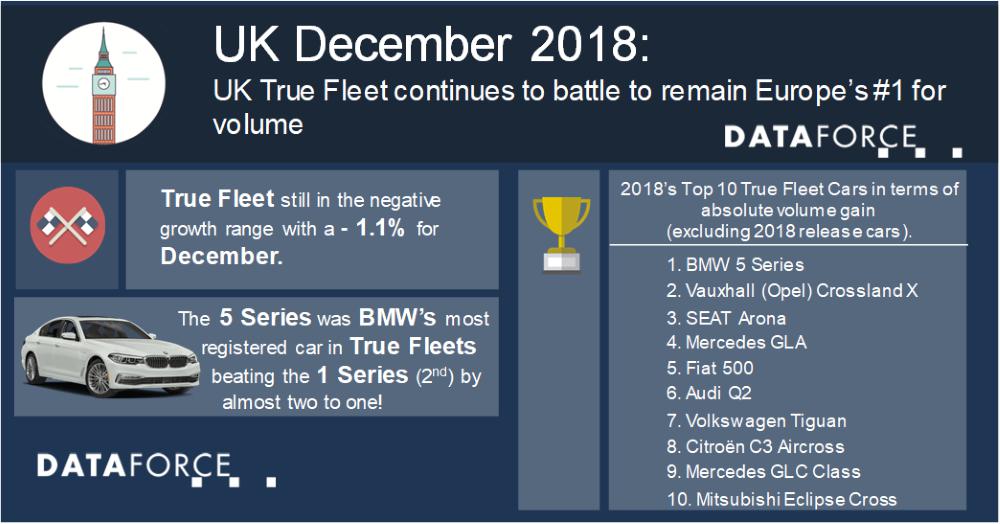 The UK has continued to recover from the massive drop caused by WLTP in September. While still in negative territory it has reduced the gap to December 2017 to only 1.1% (a little over 600 units) and for 2018 vs 2017 to -6.6%. The race to remain Europe’s #1 fleet market in terms of volume is still alive but it is certainly going to be a close race with Germany as both battle on the final straight. The Private market like fleets also continued to recover bringing the December gap to -3.8% though Special channels took their foot off the gas and recorded a -15.3% with both the Short-Term Rental & Dealership/Manufacturer sub-channels playing a somewhat equal role in this result. Brand performance Top of the December ranking Christmas tree was VW, it has been consistently in top spot since May 2018 with the only blot on the landscape coming in September when Vauxhall (Opel) took top as WLTP testing became mandatory. Ford were in 2nd place, retaining the same position as last year thanks mostly to a stellar month for Ecosport. Munich OEM BMW had a good growth month, ranking 2nd in highest growth rate in the top ten which secured the final place on the podium. Their number one seller for December was the 5 Series, which almost out registered the 1 Series (number two seller) by two to one! Vauxhall came next (4th) and Mercedes followed, with both A-Class and GLA Class contributing the most to the +19.4% growth of the brand. Nissan, Skoda, Audi and Hyundai filled out the 6th to 9th positions respectively, Audi was the hardest hit in terms of volume contraction but none of these OEMs managed a positive month. Our final position was yet another reason for Munich and the BMW Group to celebrate as MINI entered the True Fleet top 10 for the first time ever (according to Dataforce records). The maker of diminutive vehicles posted a pretty big growth of 59.3% for December as all versions (One/Cooper, Countryman and Clubman) pitched in to help the brand. Interesting side note was to see the share of Diesel engine versions at 3.6%, its lowest since April 2007 and a far away from the high of 74.0% seen in December 2013. Vehicle Segments As we finish out 2018 on what can only be described as a challenging year thanks to various influences both from inside and outside of the industry itself it is worth identifying those vehicle segments which have increased regardless of the climate. On the first level SUV is the only outright segment which can claim growth with a 12.1% increase with three of the SUV sub-segments i.e. Small, Compact and Medium producing 19.7%, 12.9% and 5.6% respectively over YTD December. We see PC Medium-Large with a +8.8% (mostly thanks to the BMW 5 series) and the Utilities Medium eking out a + 1.4% (thanks to the Ford Transit Custom, Toyota Proace, Citroën Dispatch (Jumpy) and VW Transporter).Flash addendum: Germany numbers are now in-house and have been processed. For the full year 2018, Germany beat the UK to take the highest True Fleet volume in Europe by a slim margin of 974 registrations. (538 words; 3,059 characters)Publication by indication of source (DATAFORCE) and author (as listed below) onlyDATAFORCE – Focus on Fleets Dataforce is the leading provider of fleet market data and automotive intelligence solutions in Europe. In addition, the company also provides detailed information on sales opportunities for the automotive industry, together with a wide portfolio of information based on primary market research and consulting services. The company is based in Frankfurt, Germany.Richard Worrow Dataforce Verlagsgesellschaft für Business Informationen mbH Hamburger Allee 14 60486 Frankfurt am Main GermanyPhone: +49 69 95930-253 Fax: +49 69 95930-333 Email: richard.worrow@dataforce.de www.dataforce.de

01-18-2012 | Business, Economy, Finances, B …
Spreadshirt
Spreadshirt’s UK December Sales Rise by 49 %
London–18 January 2012–Spreadshirt (www.spreadshirt.co.uk), the leading multi-channel clothing commerce platform, continues to benefit from the growing shift to shopping on the web as it today announced its record-breaking December results. The company saw UK sales increase 49% year-on-year and an impressive 75% globally. The online e-commerce platform experienced profitable growth across all business units in 2011, with the increase in revenue primarily driven by developments in the North American market.
08-04-2011 | IT, New Media & Software
Aaris Internet Solutions Pvt Ltd
Twitter Valuations Climb Post December
Mumbai, INDIA: In the news for its growing fan following and increasing popularity, Twitter is also putting money where its mouth is. There is an increased interest in Twitter, and there are deals being struck which redefine the company as we speak. Twitter is on the brink of closing out an $800 million dollar deal, which is set to pave the way for future growth. The move is also an attempt
01-20-2011 | Arts & Culture
Artfact Live!
Artfact Live! December Auction Results Roundup
(Boston, MA) – Artfact Live! closed out 2010 on a high note thanks outstanding auctions from several of Artfact's Auction House Members. December's highlights include: Apple Tree Auction Center's Model Train and Railwayana auction on December 9th with more than 4,000 online bids totaling almost $200,000 in value; Alex Cooper Auctioneers' December 11th Guns, Books, Stamps and Pens auction with over 1,100 online bids; and Ewbank Clarke Gammon Wellers' three-day
01-12-2009 | IT, New Media & Software
Rising Antivirus International Pty Ltd
Rising Won VB100 Award in December 2008
December 05, 2008 - RISING, top security products vendor, announces that Rising Antivirus won the VB100 award in December 2008, making it the third similar honor since the company joined the Virus Bulletin antivirus product test. Virus Bulletin carried its antivirus product test on Microsoft’s Windows Vista X64 platform in December 2008. Using powerful and advanced security techniques, Rising Antivirus passed this test and won its third VB 100
11-26-2007 | Fashion, Lifestyle, Trends
DOPAMIN LIMITED
Fashion label DOPAMIN starts on 1 December
Young designers from England, Finland and Germany start their own independent fashion label – defying the rules of the fashion industry “I have always had a passion for fashion and always wanted to design clothes that will bring you out and have that unique part of what we all have” – says James, 17-year-old fashion designer from Norwich, UK. This credo has made him part of one of the hippest fashion
Comments about openPR
OpenPR is clearly structured and remains true to its principle of confining itself to the essential parts. OpenPR has proven to be a very good and reliable partner to our media agency: Within the shortest time the releases are online and go down well with the media representatives. The success of OpenPR is reflected in the steadily increasing number of press releases. It is good that OpenPR exists!
Ursula Koslik, Director Marketing & PR, F+W Hamburg