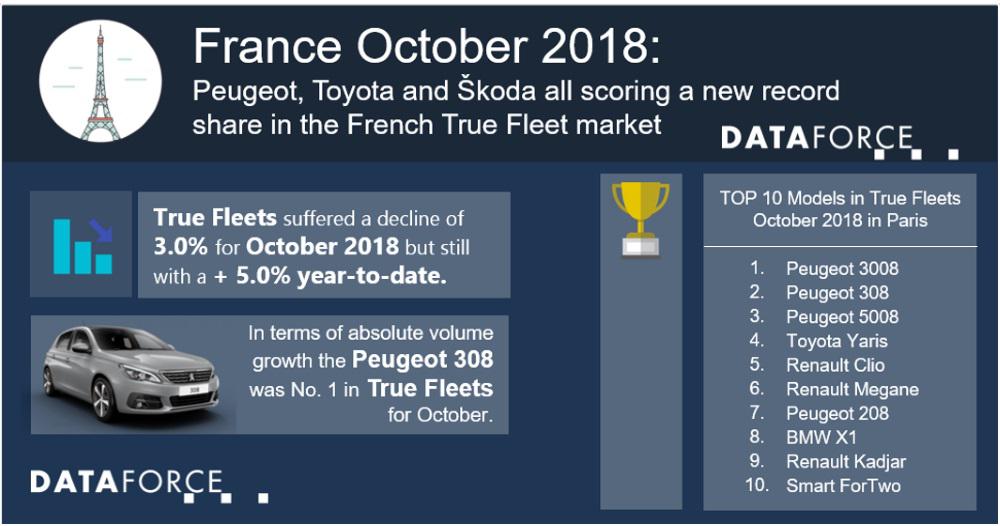 In September the French passenger car market was less affected by the impact of WLTP than the other big European countries. What about October? Well, France had to face a drop of “only” 1.5% and was once again in a better shape than Germany, Italy, Spain and the UK. While the Private Market increased its volume by 3.4% True Fleets remained in the red and were down by 3.0%. Dealerships/Manufacturer and Short-Term Rental registrations were significantly lower (- 10.4%) than October 2017 and consequently the share of these “Special Channels” was the lowest in 2018 so far. This really underlines the reciprocation between these more tactical segments on the one hand and the direct end customer channels of private and fleet on the other hand.Brand performance As usual two home brands dominated the fleet market: every second company car in 2018 was either a Peugeot or a Renault and the lead is constantly alternating between these two. In the first ten months this year both were in front five times. In October it was Peugeot’s turn again and it was well deserved: the very solid growth of 9.3% in a declining overall market led to a market share of 29.6% which is an all-time high for the PSA brand. The SUV models 3008 (number one model in True Fleets) and 5008 and the Compact Class model 308 all had double-digit growth rates compared to October last year. Additional support came from the Peugeot Traveller with a remarkable + 74.4%.Renault, Citroën and Volkswagen on ranks number two, three and four were all in the red. For Toyota in 5th place the situation was much brighter with an outstanding + 69.7% which allowed the Japanese manufacturer to overtake Mercedes, Ford and BMW. Many Toyota models increased their registrations, but the Yaris was shining exceptionally brightly. With a plus of 80.6% it was not only Toyota’s top seller in fleets but also put itself into rank number 10, gaining no less than thirteen placesWith Škoda in 9th place ahead of Opel we saw another strong performer in October. With a phenomenal + 86.5% the manufacturer from the Czech Republic scored a new record market share. Next to the SUV models of Kodiaq and Karoq, the Škoda Octavia was especially remarkable and achieved its highest monthly volume ever in the French fleet market.Fuel type performance As you will probably know, Paris is very advanced in terms of banning Diesel cars from its roads. A few days ago a large group of suburban municipalities agreed to ban all diesel-fuelled cars registered before 2001 from the A86 beltway, starting in July 2019. This would extend the ban far into the suburbs and affect a significant additional number of cars and their owners.But how is the current situation in Paris regarding fuel types? For January-October 2018 the share of Alternative fuel types in Paris was the highest across all regions of France with 11.0%. This result is not so much driven by full EVs, as their share in Paris was only slightly higher than the average for the whole country (2.3% vs. 1.9%). No, it’s the percentage of Hybrids and Plug-In Hybrids which stands out. While the average in France was 4.9% in Paris 8.7% of all new cars registered on fleets were equipped with a Hybrid powertrain.(556 words; 3,221 characters)Publication by indication of source (DATAFORCE) and author (as listed below) onlyDATAFORCE – Focus on Fleets Dataforce is the leading provider of fleet market data and automotive intelligence solutions in Europe. In addition, the company also provides detailed information on sales opportunities for the automotive industry, together with a wide portfolio of information based on primary market research and consulting services. The company is based in Frankfurt, Germany.Richard Worrow Dataforce Verlagsgesellschaft für Business Informationen mbH Hamburger Allee 14 60486 Frankfurt am Main GermanyPhone: +49 69 95930-253 Fax: +49 69 95930-333 Email: richard.worrow@dataforce.de www.dataforce.de

You can edit or delete your press release French True Fleets: Peugeot, Toyota and Škoda all scoring a new record market share here

04-12-2019 | Tourism, Cars, Traffic
Dataforce Verlagsgesellschaft für Business Informationen mbH
True Fleets with another month of decline but new record shares for Petrol and E …
With slightly under 129,000 registrations the Spanish passenger car market scored a loss of 3.6% over March 2018. Self-registrations on car manufacturers and dealerships were the only channel with growth over March last year (+ 14.7%). With - 4.4% the result for the Private Market was a bit better than for Short-Term Rentals (- 8.5%). True Fleets missed its volume from last year’s March by around nine hundred registrations and
12-19-2018 | Tourism, Cars, Traffic
Dataforce Verlagsgesellschaft für Business Informationen mbH
Germany: True Fleets recovering slightly and Diesel still has a heartbeat
Less than 273,000 new passenger car registrations or a drop of 9.9%; November was certainly a tough month for Germany. The hardest hit, channel wise, were the Private buyers with 16.1%, but you must keep in mind that November 2017 was extraordinarily strong. Registrations of Dealerships, Manufacturers and Short -Term Rentals were down by 4.3%. However, if you look at the year-to-date figures for the first eleven months
09-20-2018 | Tourism, Cars, Traffic
Dataforce Verlagsgesellschaft für Business Informationen mbH
True Fleets are flying in August but are not the only channel gaining altitude
Usually the month of August is comparatively weak, but not this time, as we saw more than 300,000 new passenger car registrations in the Total Market for the first time ever for the month of August. Due to the introduction of WLTP on September 1st, August 2018 was the last chance to register new cars which had only been tested on the old NEDC standard. Given these circumstances there were
09-23-2016 | IT, New Media & Software
GPSengine
GPSengine and Alematics forge new partnership in tracking fleets
Alematics a tracking device manufacturer for fleet tracking and management and GPSengine, a leading hosted platform service provider in IoT, GNSS, Tracking and Telematics,have established a new partnership to support Alematics tracking devices on GPSengine’s Platform Connect hosted platform. Based in Taiwan and with a core focus on tracking devices, Alematics provides a range of trackers suitable for a range of industries and applications. The combined solution made
08-11-2016 | IT, New Media & Software
Metropolitan Wireless International
Metropolitan Wireless International: The rising importance of telematics for fle …
Increasing driver safety and productivity are often the reasons why a lot of businesses today implement telematics, while other companies consider this technology as a competitive advantage. A review from MWI Consultants in Singapore shows that reducing fuel costs, inflicting policies and modifying driver behavior are some of the major benefits of telematics technology. Nowadays, there is an ostensibly vast different application for telematics wherein there is a constant change in
06-20-2016 | Logistics & Transport
GPSengine
New IoT Platform service tracks large fleets for small cost
GPSengine have announced the release of their new IoT Platform Service “Platform Connect”. Designed for enterprise level businesses to connect large scale fleets to an intelligent IoT platform, to store and query vehicle location and usage data with ease. GPSengine CEO, Jeremy McLean says, “Platform Connect means that in most cases, eighty percent of the work is already done for you. You simply install tracking devices in your vehicles, build
Comments about openPR
I can't but agree to the positive statements about your portal: easy to use, clear layout, very good search function, and quick editing!
Jens O'Brien, Borgmeier Media Communication