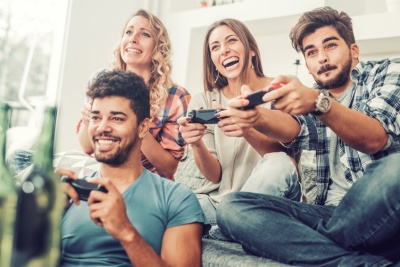 The video games industry is one that has been growing at an exponential rate over the last several years, to the point where it is challenging and in some cases even surpassing Hollywood. There is a huge amount of money to be made here then, but of course there are also numerous unique challenges owing to the uncharted nature of this business.

In this post, we will examine advertising in video games.

Video game advertisement is of course advertising as it pertains to video games. How do you sell a computer game? What are the unique challenges and struggles faced by companies selling games?

Well, one of the biggest questions faced by sellers is whether or not to show in game footage or whether to instead focus on cut scenes and pre-recorded footage. This might seem like a ‘no-brainer’, but in fact a computer game can sometimes look quite unremarkable when in game, even if the graphics are very good and the presentation is highly cinematic. Seeing the nuances of the gameplay can make little sense for someone not versed in how to play the game, and at the same time, it can end up feeling a little dull.

On the other hand, showing footage from cutscenes can be a great way to create an emotional response. You can show off the very best moments from the story, you can add dramatic music, you can make the entire experience appear bombastic and you can convey the sense of danger or drama that you want to instil. This is similar to image advertising. The objective here is not to show the game itself, but to show what it feels like to play the game.

But there are problems with this too. For one, showing footage from cutscenes can sometimes be seen as misleading. After all, you are now showing videos that don’t actually relate directly to what the game is like and that could ultimately result in some players being disappointed when they actually get to the point of playing. This is what is known in business as overpromising and underdelivering. If the promise is drastically more impressive than what the company can deliver in reality, then this might help to push sales, but it will ultimately result in a lot of backlash as customers feel that they have been cheated out of their money and delivered a dud product.

In fact, this very thing has happened numerous times recently. One way around this of course is to show a combination of footage from the game and cut scenes, or to show cutscenes that are ‘in-engine’. This means that while that piece of footage is not from a playable portion of the game (rather just a scripted sequence designed to progress the plot), it will nevertheless be created using the same engine that powers the gameplay ensuring graphical parity.

But even then, things are necessary straightforward. One additional potential issue for instance, is that some in-game footage or in-engine footage actually uses clips from highly powerful PCs, when that isn’t the experience most players are going to have.

Worse is the fact that developers need to take into account the fact that their game engines will likely improve with further development and progress. In other words, the game might genuinely look that good at the time of early previews, but look considerably different by the time that the general public get their hands on it. This was the case with the game Watch Dogs. When it was unveiled at E3, the game looked like a true ‘next gen’ title and had graphics and gameplay mechanics unlike anything we had seen up to that point.

When the game was released however, the reality was a far cry from what had been shown and understandably, people were disappointed.And this definitely hurt sales for the game and the reputation. Most reviewers stated that the game was a perfectly serviceable open-world romp, but that the hype and the promise had led people to judge it harshly. And then, when Watch Dogs 2, was released, that suffered the same slow sales despite genuinely having very impressive graphics and novel gameplay ideas.

openPR-Tip: The best way to create video game ads then, is undoubtedly to show a mixture of both gameplay and scripted sequences/cutscenes. At the same time, you should always be upfront and include notices that certain scenes may not be representative and that the product isn’t finished.

Companies are increasingly moving toward more elaborate and interesting methods to promote and market their products. In some cases this is successful and has helped to ship more units, while in others it has backfired.

One interesting area for indie game developers to explore in particular, is the concept of using crowdfunding platforms in order to raise funds from the general public to have their games completed and published. The great thing about this, is that it isn’t only a great way for a developer to raise funds, but it’s also a fantastic way for them to increase awareness for their brand, to get word out and to get people involved and feeling like part of a community. This has been very successful for a large number of games and as such, bigger publishers have been looking to get their slice of the pie.

To do so, they have occasionally attempted to directly mimic the success of these indie developers by going on crowdfunding sites. Unfortunately, this undermines the entire point of these sites: which of course is to raise funds for a project that couldn’t get off the ground otherwise. Big publishers have the money to publish their games themselves and so of course this raises the question: why didn’t they? This has also resulted in backlash.

Another approach used by some larger developers then is to offer pre-order bonuses. This is a similar attempt to secure sales, while simultaneously building hype and getting people interested in the product. But again, they need to proceed with caution. Recently, Eidos attempted this same strategy to promote the game Deus Ex: Mankind Divided and found backlash. That’s because they were offering to add extra features to the game for everyone but only if they got enough preorders. This similarly backed the whole approach of crowdfunding projects (which often included ‘goals’ for adding particular features) but again, because the company didn’t actually need the money, it just ended up falling flat.

The Size of Video Games

With all this in mind, you may be wondering just how lucrative the video games market is. Is there really a lot of money to be made here? Does it make sense to be spending a lot on advertising?

There is no doubt that the games industry has come on leaps and bounds. Some even say it is now bigger than Hollywood, but this is actually a myth. Not a myth because it isn’t true, but simply because it isn’t substantiated and there is no way to prove it either way. But the sheer fact that people are having this discussion should tell you something about the state of the video games industry. This is certainly a very wise place to be spending money.