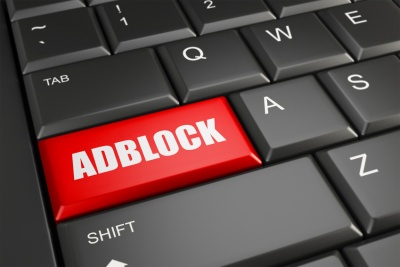 AdBlock is a tool designed to block ads from showing on a range of websites. This in turn makes the browsing experience faster and more enjoyable for users… but could it potentially lead to the downfall of the web as we know it?

There are murmurs online that the 'economy of the web' is about to go into meltdown. We're all a little too familiar with financial crises these days following the unfortunate state of the global economy lately, and the question is whether something similar might now be headed towards our cyberspace. Is the internet safe from that kind of thing? Or might the bubble burst yet again and leave a lot of us in a lot of trouble?

The Concerns With AdBlock

Currently the economy is largely built around online advertising and this is what allows for so many free services to exist in one place. This is fine so long as people keep clicking on those ads, and keep clicking on the products that lie at the end of them. The problem though comes when people stop, or when the ads stop working.

One very real threat to this system is 'AdBlock'. This is a free service that users can plug into their browsers in order to block AdSense, ads on YouTube, popups and more. This then means that you can browse a website without worrying about ads popping up in your face. This also allows pages to load faster and even reduces the amount of strain on the data connection (potentially resulting in lower charges).

This is all fine and dandy until you realize that those webmasters aren't getting paid as a result. And that the advertisers that paid to have their ads show up aren't getting as many relevant clicks.

This is a problem that AdBlock are aware of, and so they are proposing a solution: to allow some ads through (for a fee of course) which would be as inoffensive as possible. The problem with inoffensive ads though is that people tend not to click them.

openPR-Tip: And even without things like AdBlock, users are being desensitized to online advertising in general and site owners are being forced to find other ways to make money. Then there are problems like Google's algorithm changes that are destabilizing SEO in the eyes of many and services like apps that prevent people from needing to use the web at all.

So, are we doomed? Is the end of the internet as we know it nigh? Not quite. For one, even without advertising there are still other ways to monetize a site: by offering paid products for instance, or by getting paid to sponsor a company that wants exposure rather than clicks. Sites can even charge for a subscription, or they could offer users the choice of a subscription or advertising.

And things like SEO are always going to exist. Even if SEO changes a lot, as long as there are search engines there will be ways to make them work for you and thus there will be companies that can sell those SEO services. Likewise, there will always be social media marketing when SEO doesn't work and email marketing and more.

The advice to you as the web entrepreneur/site owner, is to create as many different revenue streams as possible and to use as much marketing as possible too. And remember, one person's economic crisis is another person's opportunity! Maybe now is the time to work on a solution to the ad blocking problem?

The Limitations of AdBlock

The other thing to keep in mind is that there are limitations to things like AdBlock. For one, AdBlock can only block ads it knows about, which normally means it is blocking the likes of PPC ad networks such as Google AdSense.

But if someone is paying you in order to show a banner ad on your site, there is no way that an ad blocker can then identify that this is an advert. This will look just like any other image with a do-follow link and you’ll get away with showing it.

Likewise, if you have a video showing on your site, you can still get away with that. And you can certainly get away with promotions in your text, with sponsorship deals etc.

There are other ways that this problem might remedy itself in future.

One option is that a compromise is found, and that webmasters and online publishers stop showing quite so many ads on their site – thereby diminishing the need for an ad blocker in the first place. This is something that Google has been trying to push already with algorithm changes designed to punish sites for having too many ads ‘above the fold’.

We might likewise see more sites starting to use affiliate marketing techniques or sponsorship deals. This is positive because it actually encourages site owners to spend more time developing their content and more time building a brand and a relationship with visitors. It’s only by creating trust and authority that a brand can sell products that it recommends and this is what is needed if you want to make money without AdSense.

There are likewise other options too. For instance, Google’s AMP (accelerated mobile pages) initiative is designed at least partially to reduce load times for mobile browsers. The hope is that this will lead to sites that spring to life in an instant and reportedly the sites will typically load in a quarter of the time that they would have done otherwise. This can help to reduce one of the biggest complaints regarding the use of ads and at the same time, create a more consistent way for ads to be displayed on mobile devices.

In short, AdBlocker is a very disruptive tool that may end up being a force for good or for bad. Which turns out to be the case will be dependent on how both publishers and users respond.

openPR-Tip: Just remember that adverts are partly what makes the economy of the web tick and they certainly aren’t wholly bad. The aim is to find compromise, not to eradicate all ads entirely!
Boost Your PR – Submit Your Press Releases to openPR NOW! Click Hier for FREE Press Release Submission