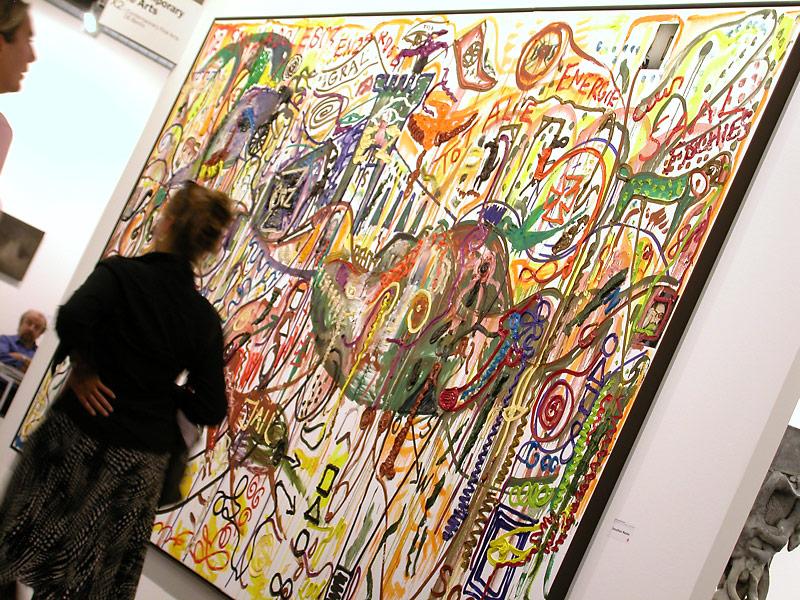 At the booth of Contemporary Fine Arts Berlin, Art 37 Basel.

VernissageTV News, June 15, 2006. The most recent episodes on VernissageTV (VTV) video podcast cover: >> Art 37 Basel International Art Show, Messe Basel: Art Basel features over 290 modern and contemporary art galleries from around the world. Art Basel is considered as the world’s premier fair for 20th- and 21st-century art. >> Liste 06 - The Young Art Fair: Of the 59 galleries being presented at this year’s Liste, 24 are participating for the first time in Basel. The exhibitors come from a total of 24 countries, among which one-fourth are from countries overseas. >> Voltashow 02 Basel: This year VOLTAshow 02 has moved to a new and larger location in the Basel harbour. The second edition of the fair that debuted in 2005 as a supplement to Basel’s art week now allows for more than double the number of galleries. >> Design Miami Basel: Ambra Medda, co-founder and director of Design Miami/ Basel talks about the success of the new design fair, the popularity of historic and contemporary design and why the fair choose Basel as second location for the fair.About VernissageTV VernissageTV (VTV) takes you to opening receptions of exhibitions and events. VernissageTV provides insight into the social side of the world of art, design and architecture. VernissageTV is talking with artists, curators and gallery owners in a relaxed style. VernissageTV is a video podcast that is widely distributed through RSS. Episodes can be viewed on computer, iPod with video functionality and TV set. VernissageTV is an open nonprofit network based in Basel, Switzerland, with correspondents worldwide. VernissageTV is offering special services for exhibition venues. Website: www.vernissage.tv , Podcast-Feed: feeds.feedburner.com/VernissageTV . VernissageTV is featured in iTunes and can easily be subscribed to via iTunes and its podcast directory or the videocast's homepage at www.vernissage.tv/ . All episodes are compatible with the iPod with video functionality. VernissageTV recommends iTunes to subscribe and watch VernissageTV but other RSS newsreaders or Video Podcast viewers like FireAnt and DTV can be used as well. Subscribe with the following address: feeds.feedburner.com/VernissageTV .Press contact: Karolina Zupan-Rupp, contact@vernissage.tv VernissageTV, Münsterberg 1, 4001 Basel / Switzerland Phone: +41 61 283 24 55 Website: www.vernissage.tv

06-03-2019 | Arts & Culture
H Ventures Zürich
ANDY MEETS WARHOL at Art Basel in Basel 2019
PRESS RELEASE ________ ANDY MEETS WARHOL at Art Basel in Basel 2019 Enabled by AXA ART Versicherung AG, longtime Partner of Art Basel in Basel ______ Zürich, 22nd May 2019. ANDY MEETS WARHOL visits and reports between the 11th and 16th of June 2019 from Art Basel in Basel. The visit of the renowned Swiss art blogger is supported by AXA XL Art & Lifestyle. AXA XL Art & Lifestyle is a longtime partner of the
08-26-2013 | Arts & Culture
GALERIE Supper
GALERIE Supper at “The solo project” 2013 Basel
In the time of June 12th until June 16th the GALERIE Supper is going to join the contemporary art fair “The solo project” in Basel. In the past years this art fair is grown to a very important place for contemporary art. By the side of many renowned international galleries, the GALERIE Supper is going to show a solo exhibition of the artist Monika Thiele, whose works are also exhibited at
11-25-2011 | Business, Economy, Finances, B …
Las Tias
BLEND, ART BASEL 2011
11/16/2011 -- In celebration of Art Basel, Las Tias will present BLEND, a site-specific multi-media exhibition conceived and executed by a group of talented and innovative local Miami artists. BLEND will combine a seamless mix of various elements where all constituent parts are to be indistinguishable from one another, portrayed in the form of live performances, poetry, sculptures, and video installations. BLEND will establish a dynamic dialogue engaging every viewer. “Blending
05-02-2011 | Associations & Organizations
Centrepoint
Centrepoint Supports Expat Expo 2011 in Basel, Switzerland
Centrepoint, the community-focused volunteer organization for expatriates of all nationalities and Swiss living in the Basel region, is pleased to announce its participation at Expat-Expo Basel 2011. Expat Expo is an annual event for the English-speaking residents of Switzerland, held in the major cities of Zürich, Geneva, Basel, Lucerne and Zug. Visitors are able to meet face-to-face with representatives of a range of organizations, businesses, museums, clubs, and service
05-30-2007 | Arts & Culture
VernissageTV
VernissageTV Announces Official Partnership with Design Miami/ Basel 2007
VernissageTV will extensively cover the most prominent and substantive forum for international design Basel, Switzerland, May 30, 2007. VernissageTV is the official TV sponsor for Design Miami/ Basel, the most prominent and substantive forum for international design. VernissageTV will extensively cover the fair, which takes place in Basel, Switzerland, from 12-16 June 2007, during the Art Basel fair. The show will feature exclusive limited edition design by leading galleries, Satellite
12-22-2006 | Arts & Culture
VernissageTV
VernissageTV Covers Art Basel Miami Beach Week
VernissageTV News, December 22, 2006 - The most recent and upcoming episodes on VernissageTV (VTV) video podcast cover: Art Basel Miami Beach Week: Art Basel Miami Beach is the American sister event of Art Basel in Switzerland. Art Basel is considered as the most important annual art show worldwide. This year Art Basel Miami Beach saw an incredible number of satellite art fairs. During the fair week 13 art fairs took
Comments about openPR
OpenPR is clearly structured and remains true to its principle of confining itself to the essential parts. OpenPR has proven to be a very good and reliable partner to our media agency: Within the shortest time the releases are online and go down well with the media representatives. The success of OpenPR is reflected in the steadily increasing number of press releases. It is good that OpenPR exists!
Ursula Koslik, Director Marketing & PR, F+W Hamburg