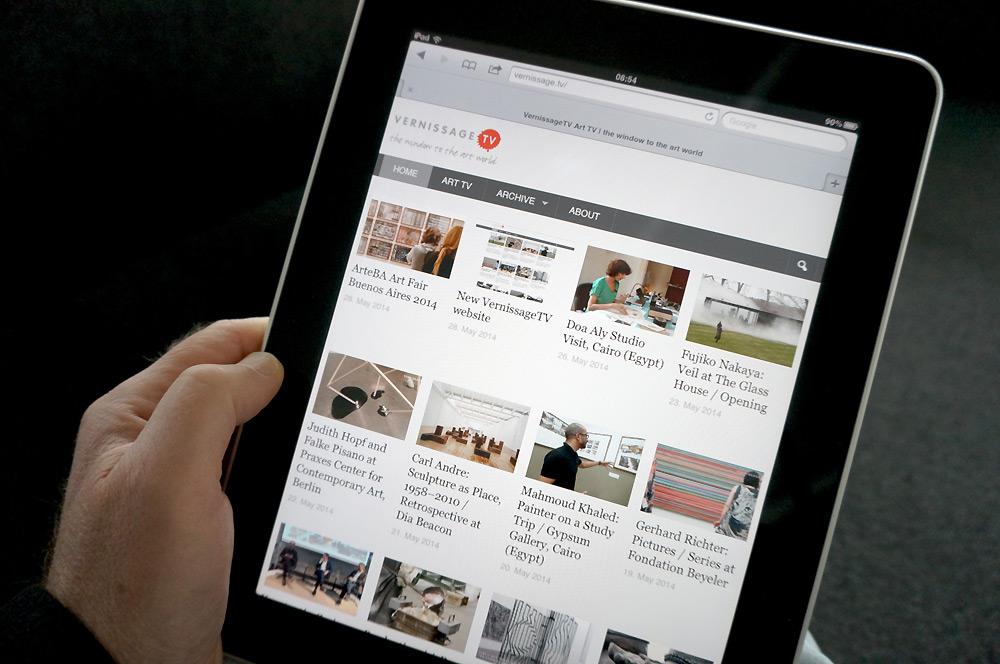 Basel (Switzerland), June 3, 2014 -- After months of work behind the scenes, VernissageTV launched its new website. The new website is responsive, has a new design, and a video administration tool specifically developed for VernissageTV. When VernissageTV started its Art TV channel in 2005, the world wide web's video size was 320 x 240 pixels. With the new layout of its website, VernissageTV takes into account ever-higher resolutions and provides a larger video player. The fact that more and more viewers watch VernissageTV's videos on mobile devices is taken into account with the responsive design of the new website: The site adapts to the size of the screen, whether the videos are being watched on a computer, tablet, or smartphone. Considering the huge archive of over 2,200 videos that cover opening receptions of art exhibitions and feature interviews with artist, designers and architects, the implementation of a new video administration tool was another important goal.As VernissageTV co-founder Heinrich Schmidt explains: “The old website was pretty sustainable, we used it for almost 8 years. With the new website, we wanted to create something similar future-proof, with functionality, simplicity and usability as key criteria. We kept things that have been proven and popular: The homepage with the overview of the latest videos, the Art TV page, and the archive pages. I think the responsive design is a huge improvement, especially for those who browse our site on small screens.”VernissageTV's new website was launched on May 27, 2014. The website's archive currently includes over 2,200 videos that feature more than 1,900 artists from Ai Weiwei to Zaha Hadid.VernissageTV is the Internet's unique TV art project, which covers exhibitions and events in the fields of contemporary art, design and architecture. The objective is to give an authentic insight into the world of art by the means of film and video. VernissageTV materializes as video podcast / Internet TV channel / video archive. VernissageTV videocasts three series: The “No Comment” section, the interviews with the protagonists of the art world; and the "r3" series with re-mastered VernissageTV Classics. VernissageTV is widely distributed via its website and Internet TV networks. Founded in September 2005 VernissageTV is growing steadily. Until now VernissageTV produced, published and archived over 2,200 episodes.VernissageTV Karolina Zupan-Rupp Totentanz 14, 4051 Basel, Switzerland Tel. +41 61 283 24 55 contact@vernissage.tv

10-01-2018 | Logistics & Transport
Philadelphia Scientific
The Internet of Things
Everything is smart these days; smart phones, smart cars and smart appliances, and these devices are becoming commonplace. Just look around your own home! They’re examples of smart technologies and come under the term ‘the Internet of Things’. This refers to the network of items that are interconnected and exchange data which is useful in all parts of life. The IoT also offers a lot of benefits to businesses, helping
04-25-2012 | Business, Economy, Finances, B …
Almuth Hauptmann-Gurski
Pirates on the internet
Adelaide, South Australia - 24th April 2012 - Internet piracy causes author Ally Hauptmann-Gurski to tear out her hair. The German-Australian novelist published her historical novel about Russian Gypsy singer Nadezhda Plevitskaya on amazon.com but promply found unauthorised offerings in digital formats on a site in Dubai. The illegal offer even had a nice blurb, saying the New York Times highly praised the novel 'La Plevitskaya'. 'The text read well
09-29-2011 | IT, New Media & Software
ipoque
ipoque Launches Internet Observatory
Comprehensive live Internet statistics show worldwide traffic patterns in real-time Leipzig, 28 September 2011 – ipoque, the leading European provider of Internet traffic management solutions, today announced the launch of its Internet Observatory – the Internet’s new spot for real-time Internet traffic statistics from all over the world. Internet Observatory is the successor of ipoque’s Internet Studies, which have been a reliable source for traffic information ever since they were
03-09-2011 | Business, Economy, Finances, B …
WSI Corporate
WSI Internet Franchise
-WSI Salutes All Veterans and Believes in Investing in America- Toronto, Ontario, March 4, 2011… Since beginning The Investing in America campaign in August 2010, WSI continues to be presenting US-based military veterans the opportunity to choose a WSI marketing business for a substantially discounted charge with the mandate that they “pay it forward” by giving back to their hometown communities through numerous charitable performances. As a result of this
02-20-2006 | IT, New Media & Software
Internet Optimizer
Internet Search Engine Optimizer
Top 10 Search Engine Optimizer is a proven tool that helps you to get top 10 rankings in Google, Yahoo and all other major search engines. How to optimize your website for Google: How to achieve that ranking and how you must change your web pages to obtain a similar ranking. Why you need to analyzes the top 10 ranked web pages for your keyword on the search engine of your
01-13-2006 | Advertising, Media Consulting, …
Hansen Connection
Internet Marketing Tool Success
Affiliate Guru, Russell Brunson, has developed a new marketing tool to help build his Affiliate Empire. In the world of Internet Affiliates, Russell Brunson is a name that stands out in the crowd. Russell just graduated from college this past spring, but he was already making a very good income from internet affiliate programs before graduation. Russell has also been very successful with his internet marketing.
Comments about openPR
9 o'clock: discuss press release with client, 10 o'clock: submit release to openPR, within the briefest possible time release is published and displayed in a prominent place on openPR.de. I am thrilled!
Zehra Spindler, Calypso Now! - Communication Agency