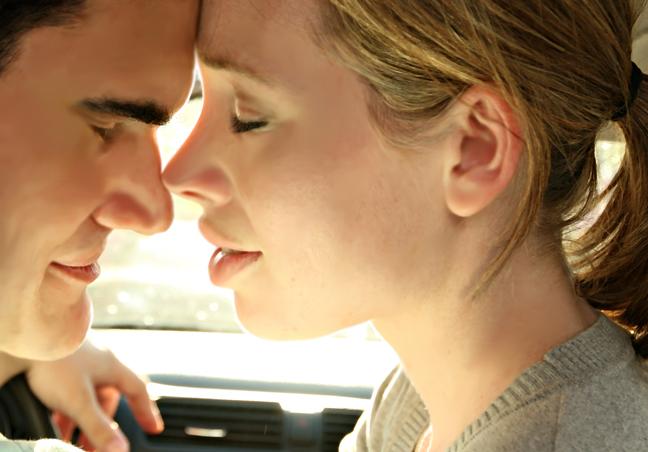 Two more weekends remain with 6 performances of THE LAST FIVE YEARS at Warner Grand Theatre, 478 West 6th Street in San Pedro, CA 90731.John Farrell, reviewer for the Daily Breeze reviewed THE LAST FIVE YEARS and had this to say: “Good news - great news, even: "The Last Five Years" by Jason Robert Brown, which opened Friday night at the Warner Grand Theatre in San Pedro, is a wonderful evening at the playhouse.”“The Relevant Stage Theater Company production mixes a terrific score, two wonderful and understated performances, and an elegantly effective use of projected photographs to create a lively, joyful and sad romantic story that you'll long remember.” “Both performers sing Brown's affecting, rock-tinged score with clarity, so you understand the important words. McClure has a clear, powerful soprano voice that projects her emotions with gentle understatement: no diva-like antics at all. She is demure and innocent as Cathy, caught up in a romance that has spun out of her control.”One audience member remarks “Great storyline! Loved how the story is told from two different perspectives about the love, marriage and end of their relationship. Her charisma and expressions and his great potent voice make this romantic musical worth seeing. Aside from the fact that it will make you appreciate your relationship and see it with new eyes! Plus the 1931 theater setting is a bonus!”John Farrell continues, “Buffer has a gravelly baritone that started out rough opening night but, once warmed up, was charmingly realistic. He is a big guy but shows grace and a gentle shyness that grows into self-assurance as he becomes a successful author in the story.”“The production - a series of songs - works perfectly well. Music director and arranger Robert Gross has produced an effective electronic version of the original that filled the Warner and never overpowered the singers, who were mic’ed effectively.”“The whole show, just over 1 1/2 hours long, is informed and held together by a series of photographs projected on a screen above the stage as pages of a scrapbook. There must be 100 or more, all shot and arranged by local photographer John Mattera. Mattera's photos were carefully planned and designed to tell the show's story in pictures. One example: a photo of the couple's Christmas celebration, with Cathy in front of her Christmas tree and just the top of Jamie's head in the frame, wearing his yarmulke. It told a story in one frame.”“THE LAST FIVE YEARS is a lovely, simple piece of theater, a modern musical filled with great songs and emotions anyone who has struggled with a relationship will recognize. The performances are more than memorable, the music bright and hummable.”Other audience members have said: “a very professionally mounted production. The actors were solid and gave good performances. The actress had an excellent singing voice. The venue is outstanding; one of the best kept secrets in Los Angeles and a historical treasure.”“Comedic lyrics, Interesting and engaging throughout and plenty of good seats.” “Enjoyed the show very much. Both actors performed very well, but the guy had better lyrics for his songs. We both agreed that we would probably enjoy any play that these actors were in. The Warner Grand is always a great venue.”“Wonderfully, entertaining. Thought provoking. And contemporary. The story of love... as seen through the eyes of two people. Sometimes we look forward. Sometimes we look back. And sometimes, love is not enough. Great Musical.” Don’t miss THE LAST FIVE YEARS playing through August 23 at Warner Grand Theatre. Call (310) 929-8129 or go to www.therelevantstage.comTRS (The Relevant Stage) is a non-profit theatre company based in San Pedro at Warner Grand Theatre. Formed in 2007, TRS strives to challenge hearts, engage minds and expose truths through the performing arts.Sally Lodge, Publicist The Relevant Stage Theatre Company 600 S. Pacific Avenue #220 San Pedro, CA 90731

04-06-2009 | Associations & Organizations
THE RELEVANT STAGE at WARNER GRAND THEATRE
One Big Union, IWW and Sabotage Cat Put to Music in San Pedro
The Relevant Stage Theatre Company (TRS) will present a visionary musical adaptation of Upton Sinclair’s 1924 play, “Singing Jailbirds”. The new production titled, UPTON SINCLAIR’S SINGING JAILBIRDS: THE MUSICAL will feature a large cast of performers. The story is set in 1920’s San Pedro, the Port Town of Los Angeles amid the demonstrations of union activists during the worker’s movement. The World Premiere of UPTON SINCLAIR’S SINGING JAILBIRDS: THE
11-10-2008 | Politics, Law & Society
THE RELEVANT STAGE at WARNER GRAND THEATRE
San Pedro Theatre Director Featured in DramaBiz Magazine
The October/November Issue of DramaBiz Magazine features a cover story about the producing artistic director of The Relevant Stage Theatre Company, Ray Buffer and the cultural environment in Downtown San Pedro at Warner Grand Theatre. DramaBiz Magazine is published by Enlighten Entertainment LLC which was founded in 1998 for one reason and one reason only—helping entertainment entities be successful in their business. Perhaps it was born of the love of the
10-06-2008 | Leisure, Entertainment, Miscel …
THE RELEVANT STAGE at WARNER GRAND THEATRE
Bat Boy Spotted in San Pedro
A creature described by onlookers as half bat, half human was spotted running near the 110 off ramp at Gaffey Street, yesterday at approximately 3:40 P.M. A source reports that the creature seemed erratic and angry, and appeared to be singing with a British accent. A student from Mary Star of the Sea High School snapped a photo of the creature while walking to a 7-Eleven. “It seemed
09-25-2008 | Arts & Culture
THE RELEVANT STAGE at WARNER GRAND THEATRE
Sydney Weir to Star as Shelley Parker in San Pedro's Bat Boy The Musical
The Relevant Stage Theatre Company presents the US Stage Company Premiere of the London/Toronto 2004 Revision of Bat Boy The Musical Story and Book By KEYTHE FARLEY and BRIAN FLEMMING Music and Lyrics By LAURENCE O'KEEFE Presented at Warner Grand Theatre, a facility of the City of Los Angeles Department of Cultural Affairs. Licensed Under Agreement with Weekly World News, Dramatists Play Service and directly with the authors. Direction: Lucas Pakes

01-28-2016 | Industry, Real Estate & Constr …
Z-LASER Optoelektronik GmbH
30 years Z-LASER
Since Z-LASER’s founding in 1985, the company has been an innovative manufacturer of intelligent laser technologies. Since its inception, applications in the fields of metrology, industrial machine vision, positioning, and medical technology have been developed. Z-LASER’s products are exclusively developed and manufactured in Freiburg, Germany and serve as illumination for high-quality 2D and 3D camera based applications as well as a visual positioning aid in various industries. Besides high performance
01-26-2012 | Business, Economy, Finances, B …
Innovative Technology
20 Years of Innovation
2012 – A year of celebration for Innovative Technology! 2012 will see the start of a year of celebration for Oldham based bank note validator manufacturer Innovative Technology Ltd (ITL) as they celebrate 20 years of Innovation! Founded in 1992 by David Bellis MBE, Innovative Technology Ltd (ITL) was the first company to manufacture low cost multi-currency validators, when it introduced the NV1 Smiley® to the market - making banknote validators affordable
08-01-2011 | IT, New Media & Software
Distinction Design Agency
Distinction Celebrate 10 Years
NOTTINGHAM-BASED DESIGN AGENCY, DISTINCTION, IS PROUD TO BE CELEBRATING THEIR FIRST 10 YEARS IN BUSINESS, AND HAVE BIG PLANS FOR THE NEXT DECADE. Distinction is an integrated design agency, providing strategy-led creative, digital and marketing services. Operating from a design studio in Nottingham and a regional sales office in London, Distinction was awarded Recommended Agency status in 2010, and was most recently shortlisted for the ‘Best in Effectiveness’ 2011 RAR awards. Since their
02-09-2011 | Business, Economy, Finances, B …
Evalueserve
Evalueserve celebrates 10 years
Evalueserve, the Knowledge Process Outsourcing (KPO) pioneer, is celebrating its 10th year in business. Founded in December 2000 by Marc Vollenweider and Dr. Alok Aggarwal, Evalueserve has established a new global market segment for knowledge-based analytics processes. ‘Over the past decade, we have been continuously strengthening our position as the number one global pure-play KPO provider. As a specialist for knowledge-based processes in various industry verticals, we focus on providing a strong
11-17-2010 | Industry, Real Estate & Constr …
German Horse Industry Consulting GmbH
Three years of GHI.
The idea of establishing a platform to offer the right contacts for interested parties from abroad in particular was nothing new. But being able to do this without charging a commission or costs to the customers and potential customers was. As was the idea of offering a permanent contact partner. "To start with, people looked at us in disbelief when we said that no commission was payable – or necessary
10-26-2010 | IT, New Media & Software
ABAS Software AG
30 years of ABAS – 16 years abas Customer Forum
Karlsruhe – The first abas Customer Forum was held in 1995 – on a small scale back then. Since then every year in September, users, software partners, cooperation partners, and employees of ABAS Software AG meet in order to exchange information, ideas, and visions. The event has continually grown in the past years: now over 800 participants come to the congress center in Karlsruhe. Exchange ideas with the founders, developers and
Comments about openPR
OpenPR is clearly structured and remains true to its principle of confining itself to the essential parts. OpenPR has proven to be a very good and reliable partner to our media agency: Within the shortest time the releases are online and go down well with the media representatives. The success of OpenPR is reflected in the steadily increasing number of press releases. It is good that OpenPR exists!
Ursula Koslik, Director Marketing & PR, F+W Hamburg