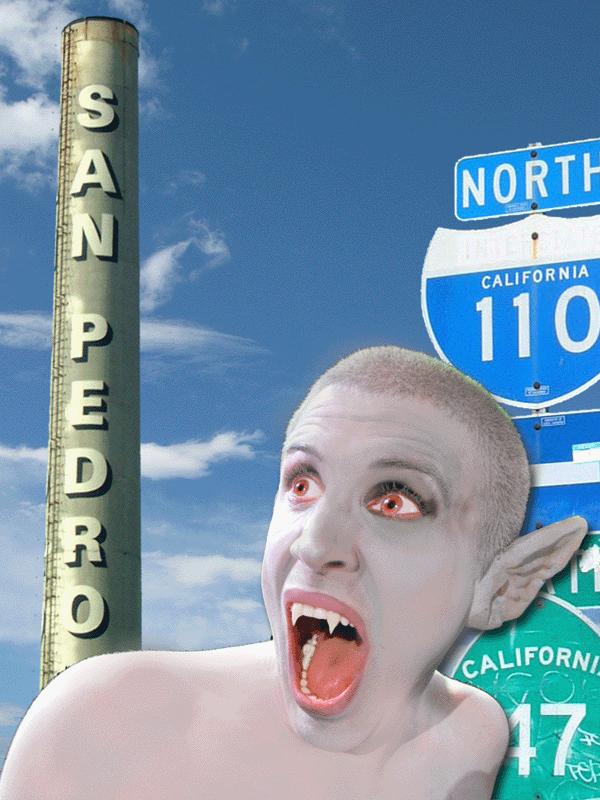 A creature described by onlookers as half bat, half human was spotted running near the 110 off ramp at Gaffey Street, yesterday at approximately 3:40 P.M. A source reports that the creature seemed erratic and angry, and appeared to be singing with a British accent. A student from Mary Star of the Sea High School snapped a photo of the creature while walking to a 7-Eleven. “It seemed frightened and confused.” She stated. The half-naked creature disappeared into the brush near Leland Park, eluding authorities. Experts believe that this may be the same creature that was reported on back in 1992 during an incident that occurred in Hope Falls, Virginia. During that incident, a group of spelunkers discovered a young boy with fangs and pointed ears in a cave. Though no records exist, it is thought that the “bat-boy” was ostracized from the community when cows began to die mysteriously. The man-bat creature seen in Los Angeles’s Port Town, resembles the Hope Falls creature. In fact, officials have used age extrapolation and facial recognition software that connect both the Hope Falls creature and this current man-bat with an 89% certainty. A San Pedro resident near the beach reported 10 nights ago hearing “bat shrieks” in her back yard. When authorities arrived, nothing out of the ordinary was found, accept a few loose peacock feathers. “Something has happened to those peacocks” she stated. “They used to always come by, and now I haven’t seen a single one in over a week!” Authorities won’t say if the mysterious appearance of this grown up “bat-boy” is connected to the incident, but many believe that a new predator walks the streets of San Pedro, with a taste not just for cows, but for peacocks. Early Sunday morning, before sunrise, a small pool of blood was reported in the alley behind Warner Grand Theatre near Sacred Grounds Coffee House. There were no other signs of foul play. Tests were run on the blood sample and results indicate the presence of many different types of DNA, but predominantly bat, and human. “He may be injured…” stated one authority, “…and animals are dangerous when they are injured.” On Sunday a group of people were observed loading items into Warner Grand Theatre, one of the items was a large, steel cage. Officials are concerned that someone may be holding the creature captive inside or near the theatre. The workers stated that they were with The Relevant Stage Theatre Company and that the items being brought into the theatre were simply props and set pieces for an upcoming show. When pressed for details about the cage, a man who refused to give his name called the employees away from the officials and refused to answer any more questions. Coincidently, according to a poster spotted in front of Warner Grand Theatre, The Relevant Stage Theatre Company will be presenting Bat Boy The Musical beginning October 9, 2008 for 8 performances. Officials are not certain whether this production has anything to do with the recent unusual sightings – but they are exploring the possibility. The Relevant Stage is San Pedro's resident musical theatre company. S. Lodge TRS 600 S. Pacific Avenue #220 San Pedro, CA 90731

08-17-2009 | Arts & Culture
THE RELEVANT STAGE at WARNER GRAND THEATRE
The Reviews are in - THE LAST FIVE YEARS is a Hit - See it Now in San Pedro
Two more weekends remain with 6 performances of THE LAST FIVE YEARS at Warner Grand Theatre, 478 West 6th Street in San Pedro, CA 90731. John Farrell, reviewer for the Daily Breeze reviewed THE LAST FIVE YEARS and had this to say: “Good news - great news, even: "The Last Five Years" by Jason Robert Brown, which opened Friday night at the Warner Grand Theatre in San Pedro, is a
04-06-2009 | Associations & Organizations
THE RELEVANT STAGE at WARNER GRAND THEATRE
One Big Union, IWW and Sabotage Cat Put to Music in San Pedro
The Relevant Stage Theatre Company (TRS) will present a visionary musical adaptation of Upton Sinclair’s 1924 play, “Singing Jailbirds”. The new production titled, UPTON SINCLAIR’S SINGING JAILBIRDS: THE MUSICAL will feature a large cast of performers. The story is set in 1920’s San Pedro, the Port Town of Los Angeles amid the demonstrations of union activists during the worker’s movement. The World Premiere of UPTON SINCLAIR’S SINGING JAILBIRDS: THE
11-10-2008 | Politics, Law & Society
THE RELEVANT STAGE at WARNER GRAND THEATRE
San Pedro Theatre Director Featured in DramaBiz Magazine
The October/November Issue of DramaBiz Magazine features a cover story about the producing artistic director of The Relevant Stage Theatre Company, Ray Buffer and the cultural environment in Downtown San Pedro at Warner Grand Theatre. DramaBiz Magazine is published by Enlighten Entertainment LLC which was founded in 1998 for one reason and one reason only—helping entertainment entities be successful in their business. Perhaps it was born of the love of the
09-25-2008 | Arts & Culture
THE RELEVANT STAGE at WARNER GRAND THEATRE
Sydney Weir to Star as Shelley Parker in San Pedro's Bat Boy The Musical
The Relevant Stage Theatre Company presents the US Stage Company Premiere of the London/Toronto 2004 Revision of Bat Boy The Musical Story and Book By KEYTHE FARLEY and BRIAN FLEMMING Music and Lyrics By LAURENCE O'KEEFE Presented at Warner Grand Theatre, a facility of the City of Los Angeles Department of Cultural Affairs. Licensed Under Agreement with Weekly World News, Dramatists Play Service and directly with the authors. Direction: Lucas Pakes

01-11-2019 | Politics, Law & Society
Cartwright Law Firm
SAN FRANCISCO CAR ACCIDENT LAWYERS
From simple car accidents to boating accidents and plane crashes, The Cartwright Law Firm provides comprehensive legal services to people injured in all types of Car Accidents. We represent injury victims as well as families who have lost loved ones to wrongful death in an accident. Our firm has a full-time, in-house investigator who can determine who was at fault for your accident. In many cases, he can visit the scene
05-21-2012 | Health & Medicine
Otto Bock HealthCare GmbH
Helping San Myo
A twelve year-old from Myanmar receives a leg prosthesis from Ottobock – Foundation covers costs San Myo from Myanmar is a bright and happy boy. Though the twelve year-old was born without the lower half of his left leg, the handicap doesn't keep him from playing football with friends. In order to help him walk, his father cobbled together a prosthesis using an old drain pipe. At the Ottobock facilities in
01-11-2012 | Politics, Law & Society
San Diego DUI Defense Attorney
San Diego DUI Defense Attorney
January 9, 2012: Mark R. De Yoe, APLC, San Diego DUI defense attorney, has over 25 years of experience as a DUI defense attorney and understands how stressful, scary and confusing being involved with a DUI can be. As Mark's website states, "he's not an experienced DUI attorney, he is and extremely experienced DUI attorney." Mark R. De Yoe has seen it all, as far as DUI cases go: first second,
10-11-2011 | Business, Economy, Finances, B …
Hornberger Sheehan Fuller & Beiter, Incorporated
New Website for San Antonio Law Firm
The San Antonio law firm of Hornberger Sheehan Fuller & Beiter, Incorporated unveiled its new website this month. The new site at hsfblaw.com was created to represent the legal services and expertise of the firm. “We felt it was important to give potential clients a fuller description of our capabilities,” said Charles M “Boxy” Hornberger, a firm shareholder. “We’re very proud of our successful history as client advocates.” The new
06-17-2011 | IT, New Media & Software
Cybernetics
Cybernetics Announces Increased SAN Storage Capacity
Cybernetics’ Powerful iSCSI SAN Solutions Now Available With 3TB Disk Drives June 10, 2011, Yorktown, Virginia -- Cybernetics has announced the immediate availability of 3TB disk drives in all SAN Storage disk solutions. Cybernetics miSAN and iSAN SAN storage solutions are now available with 3TB Hard disk drives. The miSAN and iSAN D Series are powerful storage solutions with up to 48TB of raw capacity, per unit,
11-03-2009 | Arts & Culture
The Relevant Stage
Comedy Invades San Pedro
San Pedro BrewHaHa is a new Comedy and Beer Festival produced by Ray Buffer and Mark Tomaino, happening in November from the 6th to the 22nd at Warner Grand Theatre in the historic waterfront and arts district of downtown San Pedro – the Port Town of Los Angeles. San Pedro BrewHaHa is a one-of-a-kind event that brings together great comedic acts, an expanded selection of beers and libations, plus
Comments about openPR
We publish our press releases on openPR.de because we like people who are "open" - just like us.
Frank Obels, CEO, INCONET - Informationssysteme, Communication und Netzwerkberatung GmbH