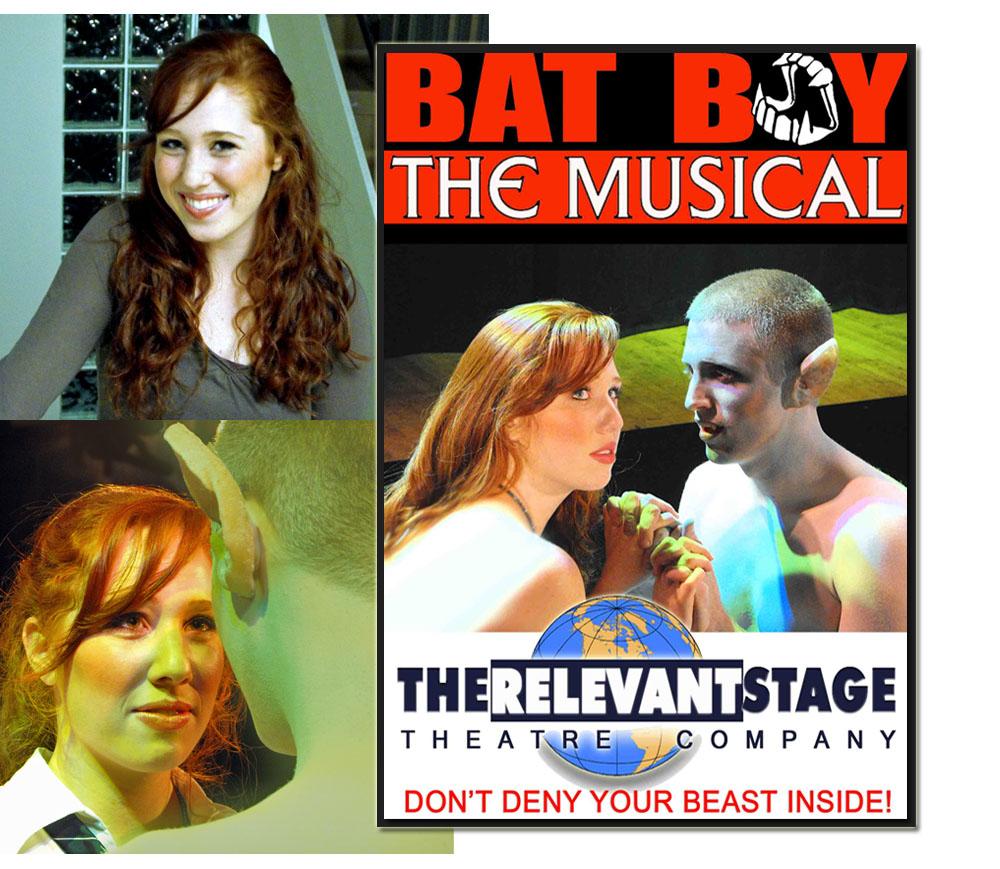 Presented at Warner Grand Theatre, a facility of the City of Los Angeles Department of Cultural Affairs.

Licensed Under Agreement with Weekly World News, Dramatists Play Service and directly with the authors.

The Relevant Stage opens the doors for its 2nd musical in its 1st season with Bat Boy The Musical. It will run from October 9 - October 19 at Warner Grand Theatre, located at 478 W. 6th Street in San Pedro, CA 90731. Along with the top notch performance TRS is hosting "Bat Adoptions" in the lobby of the theatre. Audience members at Bat Boy The Musical will each receive a pair of glow-in-the-dark "Bat Boy" fangs for free.

Souvenir T-shirts will be available for only $10 each.

Sydney Weir is a 17 year Senior at Torrance High School and is thrilled to be a part of The Relevant Stage's production of Bat Boy The Musical. She has been involved in theater since the age of seven and hopes to continue it for the rest of her life. Some of Sydney's credits include Hello Dolly (Dolly), Cinderella (Portia), Annie Get Your Gun (Annie), Brighton Beach Memoirs (Laurie), The Curious Savage (Mrs. Savage), Smile (Doria), Grease (Marty), and most recently Elton John and Tim Rice's Aida (Amneris) with a charity group called RVL S.C.O.R.E to raise money for spinal chord injury victims.

Tickets are $20 for adults, $15 for seniors 55 and over, and current college students, and only $5 for youths 18 and under. Tickets are available online at therelevantstage.com or at local San Pedro businesses such as: Williams' Book Store, Sacred Grounds Coffee House, Off the Vine, The Corner Store and Findings Art Center. More information can be found on the website or by calling 310.929.8129.

Sydney Weir and Jeff LeatherwoodA "Blood Red" Wine tasting is available before the evening performances on Thursdays, Fridays and Saturdays, 1/2 hour prior to curtain directly across the street from the theatre at Off The Vine. A pre-purchased wine package is only $25 per person which includes the tasting and the performance. Show/Wine packages may be purchased only online at therelevantstage.com or through Off The Vine at 310.831.1551.

Bat Boy: The Musical produced originally Off-Broadway is based on the character of Bat Boy, who first made his debut in 1992 in the pages of the Weekly World News. The tabloid story, about a half and half boy-human, inspired Keythe Farley, Brian Flemming and Laurence O'Keefe to write this side-splitting spoof with a profound undercurrent about the small town of Hope Falls, West Virginia and their interaction with the Bat Boy.

In the musical, Bat Boy, affectionately named Edgar by his foster family, learns to speak, walk upright, yearns for acceptance and tries to join society, only to face hatred and violence from a town that fears him and jealous rage from his foster father. Although it contains a tad bit of blood, violence, incest and interspecies sex, Bat Boy: The Musical has won several awards and rave reviews and is regarded as one of the funniest and most imaginative20musicals in years. John Lahr of The New Yorker observes "this is the only play in the history of the theatre whose hero ends Act I with a rabbit in his mouth, and who moves on in Act II to an entire cow's head."

Lucas Pakes (Director) is grateful for the opportunity to once again direct for the Relevant Stage and work in such an amazing space like the Warner Grand Theatre. Since directing Acts of Desperation, TRS's inaugural production, Lucas piloted the development of TRS YoutHorizons, and continues to work with TRS as a board member and as a resident member of the production staff. He began his career in the arts, in his hometown of South Lake Tahoe, CA and he has performed as an Actor, Dancer and Vocalist throughout California and Nevada. He received his BA in Theatre Arts from California State University, Fullerton where he found his passion for directing. Lucas worked in London's West End as a Production Assista nt for Mark Goucher Ltd and continues to work in performing arts education throughout Orange County and Northern California. Additional directing credits include, Feeding The Moon Fish, The Jungle Book and Little Red Riding Hood.

Dylan Balderrama (Choreographer) started his career as an actor and dancer 15 years ago performing in several regional musical theatre productions including Fiddler on the Roof (Bottle Dancer), South Pacific (Stewpot), The Music Man (Dance Captain), Joseph and the Amazing (Benjamin) and original adaptations of Sleeping Beauty and Robin Hood. He continued his career performing in several parades and shows at the Disneyland Resort in Anaheim, California, including A Christmas Fantasy Parade, Disney's Electrical Parade, and Block Party Bash. He has studied with several amazing dance instructors such as Stephanie Powell and Tiffany Billings and has been recently awarded a National Achievement in Movement Award from The Kennedy Center American College Theater Festival (KCACTF) for his performance in Long Beach City College's A Midsummer Night's Dream directed by Anthony Carreiro.

Chip Colvin (Music Director) was born and raised in Houston, TX. He moved to LA two and a half years ago to begin attending USC as a masters student in the Keyboard Collaborative Arts program studying with Alan Smith. Chip has extensive experience as a pianist, coach, teacher, music director, and singer. He has worked on musicals such as High School Musical, Urinetown, The Last Five Years, Bye Bye Birdie, I nto the Woods, Honk!, Bat Boy, City of Angels, Joseph and the Amazing Technicolor Dreamcoat, The Secret Garden, The Cradle Will Rock, and Hello Dolly and operas such as Cosí fan Tutte, Gianni Schicchi, Le Nozze de Figaro, Señor Deluso, and Trouble in Tahiti. Chip's other experience includes playing Beethoven's 2nd Piano Concerto as a soloist with the Houston Civic Symphony and choral/orchestral conducting taking the podium for works such as Michael W. Smith's Agnus Dei and John Rutter's Gloria.

Ray Buffer (Producing Artistic Director) is the Founder, Artistic and Managing Director of The Relevant Stage. He began his career 25 years ago, as an actor, director, vocalist, composer, filmmaker and producer Florida, where he studied musical theatre and music, gaining his BFA at Florida Atlantic University before moving to Southern California in 1999. He has worked for various professional theaters and entertainment attractions as an actor, director and stage manager. Credits include, Uncle Chris in I Remember Mama, Jud Fry in Oklahoma!, Tevye and Lazar Wolf in Fiddler on the Roof, Bill Sikes in Oliver!, Stanley Sanders in Smoke On the Mountain, Lank Hawkins in Crazy For You, and Fudge in Tales of a Fourth Grade Nothing. Directing credits include but are not limite d to: Noises Off!, Joseph and The Amazing Technicolor Dreamcoat, and Pajama Game and most recently, Over There/Over Here and Urinetown The Musical. As an Equity stage manager of over 350 performances, he has worked with such greats as Phyllis Diller, Carol Lawrence, Jayne Meadows and the late, Steve Allen. He is also a keyboardist and has composed music for the film, Dangerous Perspectives and for the theatre productions, Parade of Fairytales and Coffee & Cabaret. He has appeared on various television shows and in films, such as Curb Your Enthusiasm, The Hulk, Surviving Christmas, She Spies and Eyes, to name a few. In 2004, Ray produced the documentary film Rats & Bullies: The Dawn Marie Wesley Story. He has also worked in Marketing and Development for non-profit theaters such as Spotlite Players, Boca Raton Theatre Guild, Jan McArt's Royal Palm Dinner Theatre and The Laguna Playhouse. Ray also served as General Manager for the Long Beach Opera. In addition to his TRS duties, he serves on the board of directors of the Modjeska Playhouse and is the choral director for the internationally renowned, Mantovani Orchestra.

Bat Boy The Musical has, at this time, a limited run of only eight performances. Tickets may be purchased online at therelevantstage.com for $25/$20/$15 or $5, at select partner businesses or at the door.

For more information regarding The Relevant Stage Theatre Company, this press release, or to arrange for interviews call 310.929.8129 or email pr@thereelvantstage.com

The Relevant Stage was founded in 2007 by Ray Buffer. TRS has been staging musical and play productions sat Warner Grand Theatre since January, 2008. TRS is a non-profit performing arts group and tells stories that challenge hearts, engage minds and expose truths.

08-17-2009 | Arts & Culture
THE RELEVANT STAGE at WARNER GRAND THEATRE
The Reviews are in - THE LAST FIVE YEARS is a Hit - See it Now in San Pedro
Two more weekends remain with 6 performances of THE LAST FIVE YEARS at Warner Grand Theatre, 478 West 6th Street in San Pedro, CA 90731. John Farrell, reviewer for the Daily Breeze reviewed THE LAST FIVE YEARS and had this to say: “Good news - great news, even: "The Last Five Years" by Jason Robert Brown, which opened Friday night at the Warner Grand Theatre in San Pedro, is a
04-06-2009 | Associations & Organizations
THE RELEVANT STAGE at WARNER GRAND THEATRE
One Big Union, IWW and Sabotage Cat Put to Music in San Pedro
The Relevant Stage Theatre Company (TRS) will present a visionary musical adaptation of Upton Sinclair’s 1924 play, “Singing Jailbirds”. The new production titled, UPTON SINCLAIR’S SINGING JAILBIRDS: THE MUSICAL will feature a large cast of performers. The story is set in 1920’s San Pedro, the Port Town of Los Angeles amid the demonstrations of union activists during the worker’s movement. The World Premiere of UPTON SINCLAIR’S SINGING JAILBIRDS: THE
11-10-2008 | Politics, Law & Society
THE RELEVANT STAGE at WARNER GRAND THEATRE
San Pedro Theatre Director Featured in DramaBiz Magazine
The October/November Issue of DramaBiz Magazine features a cover story about the producing artistic director of The Relevant Stage Theatre Company, Ray Buffer and the cultural environment in Downtown San Pedro at Warner Grand Theatre. DramaBiz Magazine is published by Enlighten Entertainment LLC which was founded in 1998 for one reason and one reason only—helping entertainment entities be successful in their business. Perhaps it was born of the love of the
10-06-2008 | Leisure, Entertainment, Miscel …
THE RELEVANT STAGE at WARNER GRAND THEATRE
Bat Boy Spotted in San Pedro
A creature described by onlookers as half bat, half human was spotted running near the 110 off ramp at Gaffey Street, yesterday at approximately 3:40 P.M. A source reports that the creature seemed erratic and angry, and appeared to be singing with a British accent. A student from Mary Star of the Sea High School snapped a photo of the creature while walking to a 7-Eleven. “It seemed