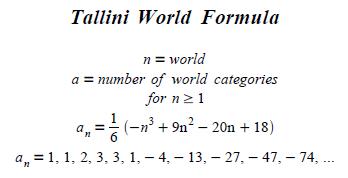 When Cesidio Tallini began theorising about the Fourth, Fifth, and Sixth Worlds, people didn't take his work seriously, including many micronationalists. The academic world was already abandoning the Official World trinity of First, Second, and Third Worlds as some kind of Cold War relict. After a few years, however, many began to accept Tallini's theories as a little more than speculation or convenient convention. Somehow, somewhere, the theories made sense. In reality, the terms First, Second, and Third World can be best understood through the 2007 Human Development Index (HDI) map, where blue countries correspond roughly with the modern First World, yellow countries with the modern Second World, and red countries with the modern Third World. So countries like Argentina, Australia, Brazil, Canada, Chile, France, Germany, Ireland, Italy, Japan, Mexico, New Zealand, Norway, Russia, South Korea, Sweden, Switzerland, United Kingdom, and the United States can be considered First World nations. Countries like Albania, Myanmar, China, Egypt, India, Indonesia, Jamaica, the Philippines, Saudi Arabia, South Africa, Thailand, Tunisia, Turkey, Venezuela and Vietnam can be considered Second World nations. Finally, countries like Bangladesh, Cameroon, Ethiopia, Kenya, Laos, Mozambique, Nigeria, Pakistan, Sierra Leone, Uganda, Yemen, and Zimbabwe can be considered Third World nations. The differences between these three worlds are entirely economic, not juridical. In the Official World, the differences between the First and Third Worlds are largely economic, since the level of de jure sovereignty is constant throughout. The Fourth, Fifth, and Sixth World, on the other hand, according to independent scholars not living in cloistered and warm academic towers, comprises nations without fully recognised states, and thus outside of the United Nations. In the Non-Official World, the differences are largely juridical, not economic, since there is a great deal of variation in the level of de facto sovereignty. At one end of the Non-Official World, a Fourth World nation is a medium- to large-sized nation without a significantly recognised state. Fourth World nations, whether old or new, with many supporters or few, always have or claim a substantial territory. The term Fourth World nation can be used interchangeably with the term self-determination or secessionist group. At other end of the Non-Official World spectrum, a Sixth World nation is a small nation, usually based on the Internet. The term Sixth World nation can be used interchangeably with the term micronation, although it was discovered that most micronations don't actually fall under this category. A Fifth World nation, on the other hand, is a small nation with a strong and established national identity. The Fifth World can be either territorial or virtual, ethnic or non-ethic, so it is actually midway in characteristics between the Fourth and Sixth Worlds. A Fifth World nation is a mature micronation. The term Fifth World nation can be used interchangeably with the term social identity or irredentist group. These are fine ideas, of course, but they were little more than speculation until yesterday, when Tallini starting writing a charter for a new international organisation that is slowly coming to life. It was while writing this charter that Tallini stumbled upon a few novel ideas that more accurately and more sequentially define Fourth, Fifth, and Sixth World nations. This morning, Tallini gave the new idea a more solid foundation by combining empirical observations with sound mathematics. The n-result is the Tallini World Formula. The Tallini World Formula is a third degree equation. You can view the Tallini World Formula at the following link, along with a table of good practical examples: http://mpr.cyberterra.net/official-and-non.html There are indeed Sixth Worlds, as Tallini postulated in the past, and the Tallini World Formula shows that very clearly, and also gives the actual components of these sixth worlds. Ladies and gentlemen, micronationalism as a subject may still be laughed at in most Official World cocktail parties. In reality, however, it is becoming a science. The Micronational Professional Registry (MPR) is a Fourth, Fifth, and Sixth World resource which intends to evolve into an alternative nation Employment Agency and/or Chamber of Commerce. The MPR also issues independent intellectual property instruments such as Print Monopolies, Enterprise Names, Enterprise Marks, and MPR Patents. Micronational Professional Registry 11 Press Street South Floral Park, NY 11001 Email: mpr@cyberterra.com URL: www.mpror.net Tel: +1 516 354 4495 Fax: +1 516 706 0080 Contact: HMRD Cesidio Tallini

10-19-2009 | Associations & Organizations
Micronational Professional Registry
The book, All Religions Are Cults, is now available
The Micronational Professional Registry (MPR) announces that the book, All Religions Are Cults: And What a Few Good Priests, Monks, Rabbis and Mullahs Can Do About It (ISBN10: 1449553559; EAN13: 9781449553555), has been published on 17 October 2009. The author of the book is the Hon Most Rev Dr Cesidio Tallini, President of the MPR, and the book was published by CreateSpace. This book is ecumenical, interreligious, and metareligious in nature. It
05-06-2009 | Politics, Law & Society
UMMOA
Remembering the moment
Like many other real countries, Independent Long Island also possesses something akin to an Overseas Territory, and its territory is called the United Micronations Multi-Oceanic Archipelago (UMMOA). The UMMOA is a multi-oceanic archipelago governed by a kind of federation of Fourth, Fifth and Sixth World nations, and the world’s first supermicronation. The UMMOA’s 11 insular possessions have no indigenous population, an inhabitable area of 13.3 square miles (34.3 square kilometres), and
10-06-2008 | Politics, Law & Society
Independent Long Island
A history of the future: Independent Long Island - Original new book available o …
The book, A history of the future: Independent Long Island, was published on 25 September 2008. The author is the Hon. Most Rev. Dr. Cesidio Tallini, who is President and Founder of the Cesidian Root, an alternative Internet; International Diplomat for the International States Parliament for Safety and Peace; Bishop of the Cesidian Church; Independent Scholar; and Governor of Independent Long Island (ILI) and the United Micronations Multi-Oceanic Archipelago (UMMOA). This
01-31-2008 | Politics, Law & Society
Independent Long Island
Independent Long Island becomes United Commonwealth Society member
It doesn\'t happen every day that a nation a mere four months old becomes a member of an important society of nations, but that\'s exactly what happened to Independent Long Island, a nation born on 20 August 2007. It is also not an everyday occurrence for someone who never won an election to also become an \"Honorable\", but that too happened to the Most Rev. Dr. Cesidio Tallini, who in little
11-29-2007 | Associations & Organizations
Cesidian Church
Cesidian Church urges support for canonization of Descartes or Cartesius
The Bishop of the Cesidian Church has issued the \"Saint René Descartes Declaration\". In this Declaration, the Bishop announces that the Cesidian Church has already beatified René Descartes (or Renatus Cartesius) for his first miracle, the miracle of the discovery of analytic geometry. This miracle of human thought has produced further miracles, since it provided the basis for the calculus of Newton and Leibniz, and through this Descartes also became one
10-01-2007 | Politics, Law & Society
Independent Long Island
Independent Long Island (ILI) Project Now Accepts "51st State" Scenario
The Governor pro tempore of the Independent Long Island (ILI) project, the Most Rev. Dr. Cesidio Tallini, announced today that while the project's emphasis is to create a viable and independent new country, and to secede from the United States, the proposal for Independent Long Island statehood -- "51st state" scenario -- suggested by some project supporters, will also be seriously considered as an alternative to full secession if it
Comments about openPR
We publish our press releases on openPR.de because we like people who are "open" - just like us.
Frank Obels, CEO, INCONET - Informationssysteme, Communication und Netzwerkberatung GmbH