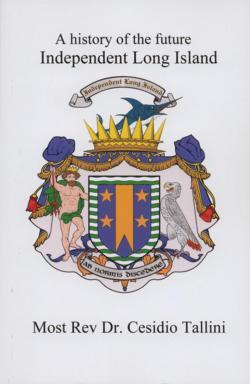 The book, A history of the future: Independent Long Island, was published on 25 September 2008. The author is the Hon. Most Rev. Dr. Cesidio Tallini, who is President and Founder of the Cesidian Root, an alternative Internet; International Diplomat for the International States Parliament for Safety and Peace; Bishop of the Cesidian Church; Independent Scholar; and Governor of Independent Long Island (ILI) and the United Micronations Multi-Oceanic Archipelago (UMMOA). This book is a seminal work in Independent Long Island nationalism. It is only 150 pages long, so it is a nice weekend read. The book contains an introduction, 5 chapters, and endnotes and "About the author" appendixes. The book was published by Long Dash Publishing. This book shows strong argument for full secession from the United States by using the taxation without representation argument used in the past, but also uses other rational arguments to make a very strong case. It shows that the fruits of today's discontent with the state of our privacy, life, and liberty can be found in the past, a past that actually echoes the present in an eerie way, a past as remote as when Independent Long Island was inhabited only by Native American tribes. This book may also change your religious convictions, because the author also shows how Independent Long Island is actually the Promised Land. You can purchase this book by going to the following website: http://book.ilination.net Independent Long Island (ILI) is a new country project that was started on 20 August 2007 to bring together a politically divided island of Long Island, and to ensure its future freedom, prosperity, and independence. ILI became one of the Founding Nations of the Commonwealth Nations Research Society on 7 February 2008, and a Member of Middlebury Institute's Registry of North American Separatist Organizations on 4 April 2008. ILI's Overseas Territory, the United Micronations Multi-Oceanic Archipelago (UMMOA), was granted Accreditation and Official Status of Incorporation by the International States Parliament for Safety and Peace. Independent Long Island 11 Press Street South Floral Park, NY 11001 Email: ilinational@gmail.com URL: http://book.ilination.net Tel: +1 516-354-4495 Fax: +1 516-706-0080 Contact: Hon Most Rev Dr Cesidio Tallini

You can edit or delete your press release A history of the future: Independent Long Island - Original new book available on Amazon.com here

10-21-2016 | Advertising, Media Consulting, …
Still Beautiful The Color of Beauty
Great New Book
Still Beautiful “The Color of Beauty”: Powerful New Book of Poetry Spans Life’s Journey; Written as a ‘Companion’ for those Reaching Out to God & Loved Ones. It’s a window into a past that’s still with us today Written from the heart and experiences of Kevin Bates, ‘Still Beautiful’ fuses fun, family love, spiritual, emotional and thought-provoking poetry to guide readers through life’s triumphs and defeats. Built into three compelling sections, every
12-15-2011 | IT, New Media & Software
ECCE TERRAM Internet Services GmbH
Facebook Photo Book App Launched
Atlanta, GA / Oldenburg, Germany (12/14/2011). Ecce Terram, a globally active digital imaging solutions company with headquarters in Atlanta, GA and Oldenburg, Germany, has launched a new photo book app for Facebook. The white-label application enables members of the social network to create and order photo books from their favorite photo services provider, which are generated directly from a Facebook photo album. According to photo industry surveys, most of the more
04-21-2011 | Business, Economy, Finances, B …
Indiaplaza.in.
Indiaplaza Celebrates World Book Day
Bangalore, Karnataka, India, Wednesday, April 20, 2011 -- (Business Wire India) Indiaplaza.com, the company which pioneered online shopping in India since 1999 is celebrating World Book Day with an unbelievable offer for book lovers ? Flat 50% off with free shipping across India on over 8 million books. World Book Day is an annual event that falls on 23rd of April and is organized by UNESCO to promote reading globally. The offer
01-03-2011 | Politics, Law & Society
Ze'ev Shemer
Featured Book
FOR IMMEDIATE RELEASE Featured Book: ISRAEL AND THE PALESTINIAN NIGHTMARE By Ze’ev Shemer Published on December, 2010 iUniverse Publishing January 1st 2011 Israel and the Palestinian nightmare is not only a reliable reference book; it is a captivating description and review of the Arab-Israeli conflict. It offers an honest account of where Israel went wrong, covers facts relating to the origins of the nation of Israel and the profound effect that history has had
11-26-2010 | Associations & Organizations
Black Hills Publication
New Book Release
FOR IMMEDIATE RELEASE: November 25, 2010 Black Hills Publications We are pleased to announce the Publication of Missing Papa by Jacqualyn Simmons. Charleston, South Carolina, November 24, 2010 – A local native of Johns Island has published “Missing Papa”, a short story elaborating about the events on the Simmons family local farm. This book is a captivating short story and illustration about farm life on Johns Island in South Carolina. The author narrates about
08-25-2009 | IT, New Media & Software
FotoInsight Ltd.
FotoInsight's New Photo Paper Book Makes Book Bulge Disappear
Today FotoInsight launches a new version of FotoInsight Designer with new lines of photo albums on photographic paper, new features like fading frames and festive templates and the addition of Linux and Mac OS versions. Cambridge, 20 August 2009. - Europe's most popular photo book software is now also available for Linux and Mac OS. Against an ever growing number of photo book services, FotoInsight is increasing its technological lead with the
Comments about openPR
OpenPR is clearly structured and remains true to its principle of confining itself to the essential parts. OpenPR has proven to be a very good and reliable partner to our media agency: Within the shortest time the releases are online and go down well with the media representatives. The success of OpenPR is reflected in the steadily increasing number of press releases. It is good that OpenPR exists!
Ursula Koslik, Director Marketing & PR, F+W Hamburg