The Principality of the Pontinha secedes from Portugal 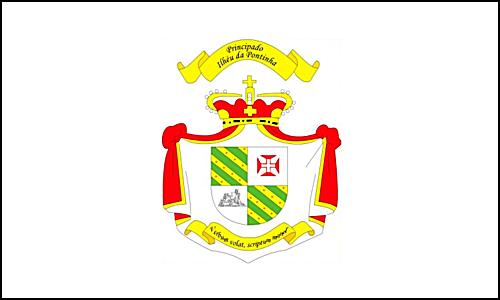 Coat of Arms of the Principality

Prince D. Renato Barros, sovereign of the Principality of the Pontinha (Portuguese: Principado da Pontinha or Principado do Ilhéu da Pontinha), has formally announced the secession of the Principality from Portugal.The Fort of Saint José is the headquarters of the Principality of the Pontinha, self-proclaimed country by Prince D. Renato Barros. The Fort of Saint José is located off the coast of the port of Funchal, capital of the Madeira Islands, an autonomous region of Portugal.The history of the rock begins as early as 1 July 1419, when Portuguese sea captains João Gonçalves Zarco and Tristão Vaz Teixeira, at the service of Prince Henry the Navigator, land on a rock, and carve steps and a shelter that can still be seen today. The history of the country, on the other hand, begins on 9 October 1903, when the then King D. Carlos I of Portugal, ancestor of D. Renato Barros, first Prince of the Pontinha, signed a Regal Letter (the original is kept in the Tower of London) that stated that the territory of the said Principality of the Pontinha, a rock where the Fort of Saint José is located (the building of the Principality), shall be sovereign.Currently the case is being analyzed by the international community, including the United Nations. Prince D. Renato Barros expects to obtain the rights of a country, including the 200 nautical miles.Prince D. Renato Barros states that he has good relations with the Brazilian Government, and if the Principality shall be recognized, it will be the door of entry to Europe.The Principality of the Pontinha is a member nation of the Micronational Professional Registry, an international and intermicronational professional registry.Micronational Professional Registry 11 Press Street South Floral Park, NY 11001 Email: mpr@cyberterra.com URL: www.mpror.net Tel: +1 516 354 4495 Fax: +1 516 706 0080 Contact: Most Rev. Dr. Cesidio TalliniThe Micronational Professional Registry (MPR) is a Fourth, Fifth, and Sixth World resource which intends to evolve into an alternative nation Employment Agency and/or Chamber of Commerce. The MPR also issues independent intellectual property instruments such as Print Monopolies, Enterprise Names, Enterprise Marks, and MPR Patents.

05-20-2020 | Industry, Real Estate & Constr …
John Taylor Monaco
How has COVID-19 affected the Monaco property market? Local luxury real estate a …
Monaco lifted its lockdown on May 4th after nearly two months of COVID-19 related restrictions, which required all but all non-essential businesses to close their doors and stop in-person trade. This lockdown put a halt on any property transactions and rentals in Monaco, while around the world the economic effects of the ongoing COVID-19 crisis still remain to be seen. With many in the Principality wondering how the property market
01-05-2011 | Business, Economy, Finances, B …
Mahrberg Wealth AG
Mahrberg Wealth AG – global finance expert takes on David One
Mahrberg Wealth AG, one of Liechtenstein’s most renowned wealth management companies, upgrades their allocation management team with Thomas Bachheimer, a globally well known finance expert. With January 1, 2011 Thomas Bachheimer has joined with his founded expertise in wealth management the Mahrberg Wealth AG in the Principality of Liechtenstein. In his new responsibility as head of the quantitative-systematic division of the asset management group he gradually takes on the lead
03-19-2008 | Associations & Organizations
Mandoga Media
Monaco Humanitaire 2008, a Photographic Exhibition at the Grimaldi Forum
Monaco Humanitaire 2008 is a Monegasque association set up for the organisation of a photographic exhibition in order to illustrate the humanitarian action carried out globally by the Principality of Monaco over the past fifty years. This significant humanitarian involvement, highlighted by prominent international photographers including Duncan Willets, Nick Danziger, Patrick de Wilde and others, in addition to local photographers, will be showcased to the public on the occasion of H.S.H.
12-17-2007 | Sports
Mandoga Media
The 96th Tour de France will start from Monaco
The announcement is scarcely official, but already a particular aura of enchantment surrounds the start of the 2009 Tour. “We know that the Tour de France Start from Monaco will be a landmark event”, says Christian Prudhomme, Chef of the Tour de France. “The prestige of the Principality together with its location and geography confirm this”, he continues. After the official presentation of the riders, the magnificent setting of the Rock
08-27-2007 | Politics, Law & Society
Cesidian Root
Cesidian Root starts new country of Independent Long Island with .ILI Top-Level …
South Floral Park, NY, August 20, 2007 -- The President and Founder of the Cesidian Root, an alternative and intercontinental Internet, announced today that he has started the new country project of Independent Long Island (ILI). Independent Long Island (ILI) is the new name the President of the Cesidian Root has given to Long Island, and this new national entity is made up of the Brooklyn and Queens boroughs of New
06-01-2006 | Energy & Environment
Your Monaco
Monaco - Luxury Yacht Show Fights Global Warming
The world's leading luxury yacht show in Monaco is to pay for 55 wind turbines in New Zealand - enough to generate power for 45,000 homes - making the event 'carbon neutral'. Under the watchful eye of Prince Albert, the yacht show is part of Monaco's new stance on global warming, and comes shortly after Prince Albert himself travelled to the North Pole in April to highlight the damage he believes
Comments about openPR
We publish our press releases on openPR.de because we like people who are "open" - just like us.
Frank Obels, CEO, INCONET - Informationssysteme, Communication und Netzwerkberatung GmbH