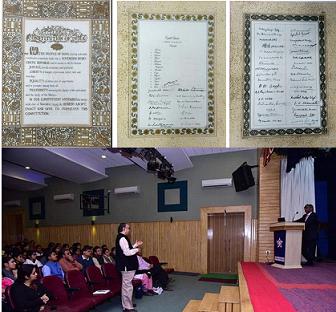 One of the three original copies of the Indian Constitution is presently in Banasthali whose founder Apaji Shri Hiralal Shastriji was one of the members of the constituent assembly which drafted the constitution. The original Constitution of India, adopted on 26 January 1950, was not a printed document. It was entirely handcrafted by the artists of Shantiniketan under the guidance of Acharya Nandalal Bose, with the calligraphy texts done by Prem Behari Narain Raizada in Delhi. This day is celebrated on the twenty- sixth day of November to honour the 207 eminent members of the Constituent Assembly who are considered the founding fathers of the Constitution of India.Every citizen in India today knows for sure that the Constitution is supreme and the Fundamental Rights guaranteed under it indeed are sacrosanct. The evolutionary stages of the Constitution started from Minto Morley Reforms resulting in The Indian Councils Act 1909 followed by Montagu Chelmsford Reforms resulting in the Government of India Act 1919, the 1927 Simon Commission and Round Table Conferences (1930 - 1932) leading to the Government of India Act 1935, the 1946 cabinet Mission Plan and the subsequent formation of the Constituent Assembly. The Quasi Federal nature of Indian Constitution is unique as against that of the American and British constitutions.One may say that 26 January comes before November 26 in the calendar of any year but in the evolutionary calendar of the Constitution of India it was 26 November 1949 which came before 26 January 1950. The significance of 26 November observed as National Law Day in India lies in the fact that it was on this day in year 1949, the drafting of the Constitution by the Constituent Assembly which started functioning on 09 December 1946 under the Chairmanship of Dr BR Ambedkar was completed after a span of 2 years, 11 months and 17 days. Subsequently, it was signed on 24 January 1950 and enacted on 26th January 1950 on which date the Constituent Assembly also ceased to exist transforming to the birth of the provisional Parliament of India.Jamnalal School of Legal Studies JBSLS is the law faculty at Banasthali University, established in the year 2013. It is one of its kind law department in India established for empowering women in the legal arena and was inaugurated by former Chief Justice R.M. Lodha. Banasthali Law School started with only 120 students and today is a buzzing hub of over 700 law students. Be it moots, debates, seminars, MUNs etc. JBSLS has always performed the best wherever it has participated. As a part of Law Day Celebrations, Banasthali students participated in NCW Nationwide competition to create awareness about legal rights of women on 12 Nov 2017 and the winners are First Position - Santosh Sharma (B.Com.LL.B V sem.), Second Position - Anuja Jalan ( B.A.LL.B VII sem.), Third Position - Upasana Khattri ( B.B.A.LL.B VII sem.), Richa Goel (B.B.A.LL.B V sem.), Shiv Priya ( B.Com.LL.B VII sem.), Karuna Sindhu ( B.A.LL.B V sem.), Jaya Pandey ( B.A.LL.B Vsem.).Renowned senior advocate Shri Nitin Potdar, Partner, J. Sagar Associates, Mumbai, one of the Top Law firms of India, visited campus on 25th November 2017 and gave a talk on "Lawyers in Making" and explained the career options, right approach, role of students, teachers and how to succeed. Beyond doubt, every educational institution has a name but only very few like Banasthali which is One among the top ranking Institution in India today featuring in QS BRICS Rankings 2018 and also the largest fully residential women’s university in the world, have a legacy and heritage. Banasthali alumni can be found in all latitudes, longitudes and altitudes in all walks of life across the globe. For more details about Banasthali see http://www.banasthali.org/About Banasthali: The Institution which is also the largest fully residential women’s university in the world has played a big role in revolutionizing women’s education in the country for the last eight decades with a belief that there is a tremendous role of higher education in empowering the women. Banasthali has scripted numerous success stories in a wide range of fields, and stands tall among the citadels of learning in India today. Team Banasthali with Vice Chancellor J C Bose Memorial Award for eminent scientist recipient Prof Aditya Shastri a highly acclaimed alumnus of BITS Pilani, SUNY State University of New York Stony Brook and MIT USA is indeed racing forward to be the very best among global women universities. Proud to be Banasthali alumni who call themselves as Banasthalites can be found in all latitudes, longitudes and altitudes in all walks of life across the globe.Banasthali University P.O. Banasthali Vidyapith Rajasthan – 304022 Phone 91 1438 228456 / 228341 Email: info@banasthali.ac.in Website: http://www.banasthali.org Facebook: www.facebook.com/Banasthali.org