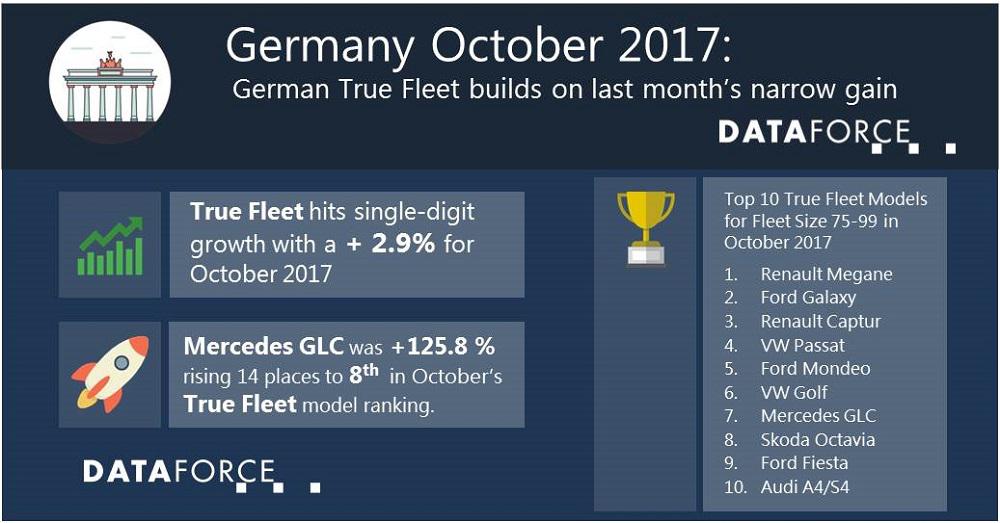 The German car market has seemingly shaken off last month’s slightly gloomy outcome to push into a more positive position. Finishing with a + 3.9% for the Total Market or a little under 273,000 registrations, consumers seem to have returned to the marketplace. Private registrations were up 9.8% over October 2016 and grew its YTD (year-to-date) growth percentage to 3.2%. True Fleets produced a solid 2.9% growth for the month while Special Channels were the only segment to record a negative growth with a - 0.9%.A game of two halves for True Fleet Top 10 OEMs Gains and losses were equally split for OEMs in October’s True Fleet channel though the majority of gains were made in the lower ranks. VW retained the crown (as would be expected) while Mercedes leapfrogged Audi (3rd) to take 2nd position with a + 22.2% growth. The next five OEMs all retained their standings from last October with two of these managing to achieve a positive month in comparison. BMW (4th), Ford (5th) and Opel (7th) just entered negative territory, with the newly acquired manufacturer from Rüsselsheim a mere 11 units away from a positive result.Skoda (6th) produced a solid display with + 20.9% surge but it was the two French manufacturers Renault and Peugeot who were the month’s growth superstars. Renault (8th) jumped 47.6% with some standout figures achieved by both the Megane and Scenic and was the last OEM to retain its positon. However, its country compatriot Peugeot (9th) delivered a + 157.0% gain, jumping 4 places, with noteworthy growths from the 208, 3008, 5008 and Expert. SEAT (10th) completed the Top 10 with a positive month and a + 33.2% though it dropped a rank from last year’s 9th place.Robust growth for fleet size 75-99 cars For the German market we have the ability to segment the True Fleet channel by fleet size and our interest was piqued in the 75-99 category where unusual growth peaks were recorded for certain regions. October was a very significant month in terms of growth as it outshone last year’s numbers by an extremely healthy 58.3% and has the 2nd highest YTD expansion of 12.0% (150–199 is highest with 16.5%). For lots of our fleet size groupings we see the German brands dominating the ranking but here it was a French brand.Renault is seemingly unstoppable in their 2018 growth and currently stands at + 47.6% YTD but surprisingly it is within the fuel segment where they seem to have stolen a march on the German brands. Currently outselling the nearest petrol rival by over 4 to 1 and currently sitting at + 200.2% for the YTD it is clear the appetite away from diesel has certainly helped Renault to dominate this fleet size segment.(464 words; 2,665 characters)Publication by indication of source (DATAFORCE) onlyDATAFORCE – Focus on Fleets Dataforce is the leading provider of fleet market data and automotive intelligence solutions in Europe. In addition, the company also provides detailed information on sales opportunities for the automotive industry, together with a wide portfolio of information based on primary market research and consulting services. The company is based in Frankfurt, Germany.Richard Worrow Dataforce Verlagsgesellschaft für Business Informationen mbH Hamburger Allee 14 60486 Frankfurt am Main GermanyPhone: +49 69 95930-253 Fax: +49 69 95930-333 Email: richard.worrow@dataforce.de www.dataforce.de

04-28-2020 | Business, Economy, Finances, B …
Your German Mortgage
Find the best conditions for your German mortgage with Your German Mortgage
During times of the Coronavirus, we are here to help you with finding the right financing for your property. Special times call for special measures, that's why it's now more important to find a trustworthy and experienced mortgage broker than ever. We got you covered from finding your property of dreams all the way to financing it. To ensure that, we have experts in almost every German major city,
11-16-2018 | Politics, Law & Society
i.b.s. International Operative Services e.K.
German Maritime Security 2018, German Government Statement!
Despite all international and national efforts, piracy remains a serious peril for the international shipping industry. Especially in Asia (i.e. Chittagong/Bangladesh or on the Strait of Malacca), but also in South America (e.g. Bay of Santos/Brazil or in the port of Callao/Peru) robbery or piracy there has recurred in the recent past. At the West African coast the number of incidents had raised even by 50% with 66 incidents this
07-26-2017 | Business, Economy, Finances, B …
Teck Language Solutions Inc.
More German Investments Mean More German Translations
Why Language Continues to be an Obstacle for Investing in Germany Germany is one of the prime markets for foreign investments, with an estimated 4% of global direct investment making its way into the country. In fact, the world’s second richest man, Warren Buffett, who is only beaten to the top spot on the financial leaderboard by Microsoft Founder Bill Gates, believes Germany to be a ‘great market’, and confirms the
08-18-2015 | Industry, Real Estate & Constr …
IKA®-Werke GmbH & Co. KG
German Design Award 2015
German Design Council Awards a Special Mention to the LR 1000 Laboratory Reactor and Nominates the Tube Mill Staufen, Germany, February 23, 2015 — For the second time, a device produced by IKA® Werke has received the "Special mention for exceptional design quality" award from the German Design Council. The company was presented with the award in the "Excellent Product Design — Industry" category as part of the German Design Award 2015
12-24-2011 | Politics, Law & Society
bunk-alliance Rechtsanwälte
German Local Trade Tax
All the companies in Germany are liable to pay not only corporate income tax, whose rate is nowadays about 15% of the annual profit of the company, but also trade tax (Gewerbesteuer), which is a tax of German characteristics. Why would we say that trade tax is of German characteristics? Because it is different from the corporate income tax, which is charged by the German Federal Government and it is difficult
05-20-2008 | Leisure, Entertainment, Miscel …
SkatMedia
ISPA – German Masters 2008
Magdeburg – Over the long weekend of the 4. Mai more than 1.000 Skat players filled the Mittelland hall in Barleben. The tournaments of the 30. German Mastery and the 27. open International German Single Mastership were held by the International Skat Players Association, ISPA Germany. Patrons of the Games were the 1st Barleber Skat sports club e.V. and the Skat club \"Burger Ihleskater\", whose good organization together with the
Comments about openPR
Your portal is fast, simple, and easy to use. Others may have more functions but they also demand more editing time, you have to preformat the text in order to achieve a good result etc. I think openPR is really fantastic!
Andreas Knepper, wallmedien AG