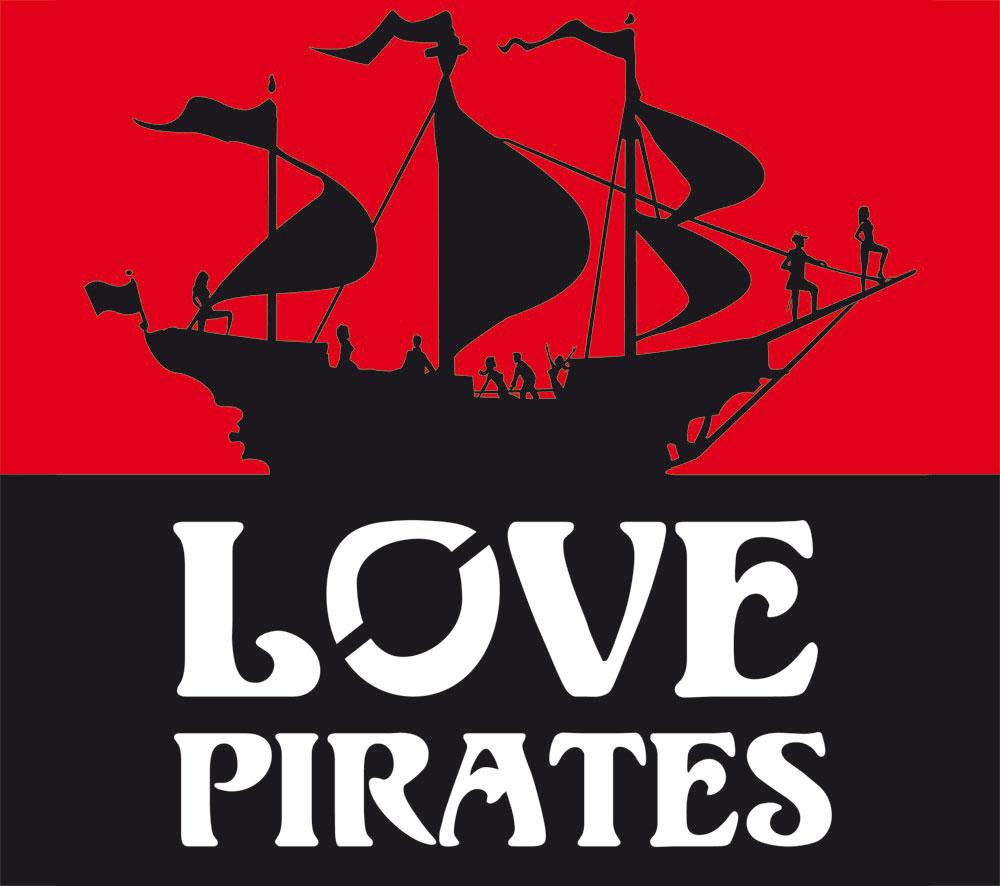 A radioshow on the internet that convinces with extraordinary lyrics and that, in the first week, has spread out virally unusually fast all over the world.The Guerilla Radioshow of the band LOVE PIRATES was developed by the network HUCKLEBERRY FRIENDS AG - worldwide creative network.

Already in the first week, 230,000 listeners could be reached for the debut album "Brooklyn Bridge" by viral marketing. The produktion of LOVE PIRATES was born from the internationally awarded creative team for audio- visuals NEUE WESTPARK STUDIOS

The worldwide online- release starts on april 28th 2009.
You can listen to the LOVE PIRATES Guerilla-Show on lovepirates.com
The lyrics are as refreshing as the album itself.

„How should I suscribe this album? As I understand it LOVE PIRATES are the most pirate brand in the world. My friends and I branded the name and the style of living and feeling sound early in 1984. It´s a mix of Bubbles in my brain and LOVE PIRATES in my vein. If you enjoy LOVE PIRATES the first time you will know New York is made for everybody - Salemaleikum, Harlem I like you. Cape Town Chill with Paris Soul like Mama has a real chocolate cake, Not a wall street low fat fake. LOVEPIRATES.com is the link I think to the sharks, which are diving in your drink. Jezebel Baby! For a fee, her heart is big like Sanssouci. Enjoy drumhead delicacy from this cabriolet chillout dreadlocks are in heaven album and listen to a cat and walk song for one of the sweetest huckleberry girls of the world, Miss Veroncia Bond. I say she´s a real bellybutton burner. You know, walking down on Brooklyn Bridge or shoot the shit a little bit and rock the sundance kid. Enjoy the 16 lucky number sleven songs in a timemachine and your shoes are tight like jelly bean.“ said Huckleberr Kid, the producer of LOVE PIRATES.

You can edit or delete your press release LOVE PIRATES thrills with a L.A. Guerilla - Radioshow / Introduction of the debut album "Brooklyn Bridge" here

03-09-2021 | Fashion, Lifestyle, Trends
Eat Like a Writer
Writers Love Pizza, Too!
March 8, 2021 -- Writers reveal their favorite pizza toppings, and brand managers are listening. Eat Like a Writer (www.eatlikeawriter.com) today announced that writers love pizza. Not necessarily a revelation, since pizza is America’s favorite food, but the survey offers additional insights. “Surveying writers about what they like to eat offers interesting insights for brand managers,” says Eat Like a Writer editor Liz Barrett Foster. “Not only is the information interesting, but
01-02-2019 | Associations & Organizations
Universal Soul Love Ltd
Universal Soul Love - A Celebration of Love and Life
Universal Soul Love Day: The New Holiday Focusing On Compassion, Not Commercialism Sydney, Australia - December 29, 2018 - The commercialism and consumerism of the festive period doesn't sit well with many people. What was once a celebration of love and togetherness has become something different; it has become a time for spending, a time of loyalty to brands rather than to our fellow human beings, and, for millions of people
01-28-2016 | Fashion, Lifestyle, Trends
simpleTechs GmbH
Mosband - spontaneous proof of love
The iOS app mosband is designed for men who want to appear at their best in a relationship, but sometimes lack ideas of how to do it. Mosband does not only remind men to surprise their girlfriend from time to time, but also delivers suitable tips at once. Berlin, 12.10.2015 - The mosband app recalls men to give a little pleasure or surprise to their partner in their daily routine. The
02-08-2011 | Fashion, Lifestyle, Trends
The Vintage Scarf
The Vintage Scarf=Love
SCARVES! What can we say? They are an absolute necessity in the closet of a glamour girly girl. From luxurious materials to bright, unique designs, scarves are always there to spruce up a drab outfit or put the finishing touch on a well-planned ensemble. Not only are scarves an inexpensive way to bring life to forgotten tops, they are useful in more ways than one. We were lucky enough to be
12-22-2010 | Media & Telecommunications
mobivention GmbH
mobivention releases Love Match widget
Cologne, December 21, 2010 - mobivention presents a new widget for mobile phones: Love Match. With this fun application users are able to check the compatibility through the analysis of their fingerprints and find out if they are a perfect match. After the fingerprint scan the analysis result is presented in a percentage. The higher the percentage the better the love match. The application is compatible with Symbian, iPhone and Android
10-07-2008 | Leisure, Entertainment, Miscel …
All Things Media
I Love This School Tour
JUST ANNOUNCED - The I Love This School Tour with Billy Craig is set to begin the first week of November in Cleveland, Ohio. Created and produced by All Things Media and imusiccd.com, this age appropriate high-energy musical journey is filled with songs, laughter and original characters like Super Sam the guitar man, School Ja Boy, the hip hop rapper man and ZIGGY, the classic rocker dude. This show
Comments about openPR
OpenPR is clearly structured and remains true to its principle of confining itself to the essential parts. OpenPR has proven to be a very good and reliable partner to our media agency: Within the shortest time the releases are online and go down well with the media representatives. The success of OpenPR is reflected in the steadily increasing number of press releases. It is good that OpenPR exists!
Ursula Koslik, Director Marketing & PR, F+W Hamburg