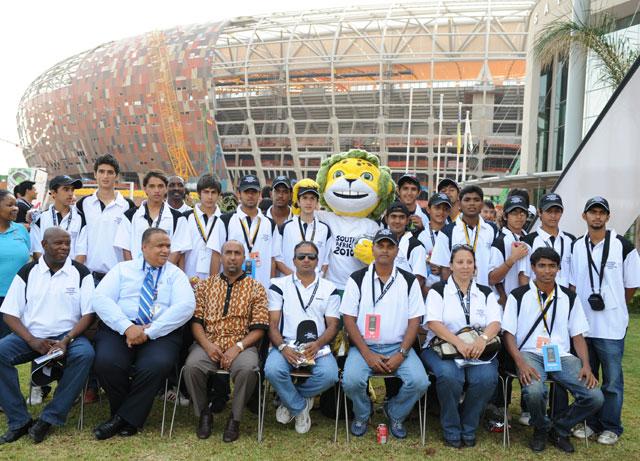 PIFA-CYFC U-17 team played against the best academies in the world at the Gauteng Future Champions in South Africa Premier India Football Academy’s U-17 boys “PIFA-CYFC” from India were invited through Cutting Edge Pvt Ltd to participate in the Gauteng Future Champions Under-17 Football Tournament that was held in South Africa from March 23 to 29, 2009. The 16-member team from India, which was invited by the Gauteng Provincial Government, joined 11 other top junior teams from around the globe. The competition was being held in the run-up to the 2010 FIFA World Cup that will be held in South Africa. The following players were selected for the team : Harshad Meher ( Capt), Kean Lewis, Ajit Bhoir, Amarjeet Gadhri, Rehan Poonawala, Sumehr Gwalani, Rickin Dang, Rishi Singh, Suveer Katariya, Burges Master, Dev Krsna Sagar, Crish Shah, Karan Sawhney, Siddharth Singh, Prudhvi Kolaventy & Amal Khandwala The team officials were Coach Nirvan Shah, a UEFA licencee, Tour Manager - Armaan Malick and Team Manager - Anjali Shah. PIFA-CYFC was in Group ‘A’ along with Notwane FC of Botswana, Sedibeng Select of South Africa. and Inter Milan of Italy. The other teams in the tournament include the formidable SC Corinthians of Brazil, Kaiser Chiefs of South Africa and Boca Juniors of Argentina. Even thought the team lost all its matches by narrow margins in the final minutes of the match mainly due to lack of fitness, the boys came out of the game with their heads up and hopeful that they could beat their opponents. The highlight of this tour was when Karan Sawhney put one past Inter-Milan goal keeper. The finals was won by Boca Juniors (Argentina) they beat Esperance (Tunisia) 2-0, the third place was taken by Inter Milan. The Gauteng Provincial Government and South African Football Association provided first class staying and match facilities. VIP security. The teams were treated to a gala dinner & an African cultural show Umoja, a tour to the Cradle of Life and a Lion Safari. Later, the teams were taken to SAFA House the head office of South African Football Association and to see the construction of the Soccer City stadium that will host the opening & closing ceremony of the FIFA 2010 World Cup. The team’s air travel was fully sponsored by South African Airways and the playing kit by NIKE. A Football Academy dedicated to training young Indian children. It strongly believes that the road to India's FIFA World Cup is thru the children, they are the future of India. PIFA organize camps in Europe & in India with UEFA Coaches as well as runs a training academy in Mumbai. All coaches are AFC / FA/ UEFA licensed. They have a men’s & women’s team in the MDFA league. They also conduct various events related to children’s football. Associated with Inspire Academy, Rangers Soccer School, AC Milan Academy, Cruzerio EC, Fundacion Real Madrid, Everton FC Youth Academy. PIFA Vision - India in the 2022 World Cup !!! Premier India Football Academy 20 Evergreen Industrial Estate, Dr. E. Moses Road, Mahalaxmi, Mumbai - 400 011 (INDIA) Tel : 91 22 3042 2263 | Fax : 3042 2262 | Mob : 98202 68644 Website : www.pifacademy.com