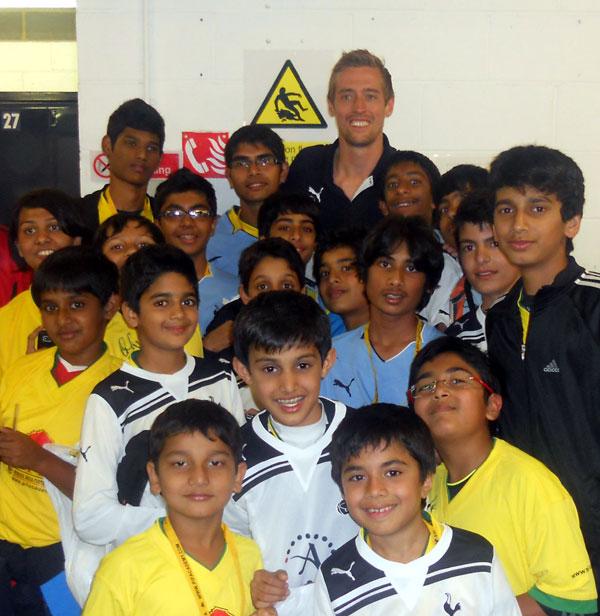 Premier India Football Academy (PIFA) organised their 23rd camp to Europe. This time the camp was held at the Academy in London from 3rd May to 12 May 2011. The training was conducted by UEFA coaches from Coaching Connexions.The camp focused on technical training to help develop the skills and awareness on the pitch. Mr Kenny Brown (ex West Ham player) delivered a special training session for the kids.The campers got to tour Arsenal & Chelsea stadium and mueseum. They were taken to White Hart Lane to watch the BPL match between Tottenham and Blackpool. After the match Peter Crouch (England & Spurs striker) and Gary Taylor Fletcher (Blackpool FC) specially met the PIFA campers and signed autographs.Friendly matches were played aganst local side – Boca Football Club to get an expereince of English youth football and a chance to show their skills.At the end of the camp the children completed a fitness test similar to what academy players would do. A skills test was also conducted that consisted of dribbling, passing, control and shooting. The winner was Nimesh Solanki with 630 points, the runners up was 620 points both PIFA students.The most outstanding camper Akshay Mahimtura won a special prize – Gary Taylor Fletcher’s playing jersey signed by the entire Blackpool team.The children were accompanied from India by PIFA Directors Anjali & Nirvan Shah.The next camp is from 1-9 June 2011 at the Liverpool Academy.The proceeds of these camps are utilised to develop team I league 2nd division team PIFA Colaba FC from the PIFA Colaba community football project undertaken by NGO - PIFA Foundation for benefit of sports.ABOUT PIFA A Football Academy dedicated to training young Indian children. It strongly believes that the road to India's FIFA World Cup is thru the children, they are the future of India. PIFA organize camps in Europe & in India with UEFA Coaches as well as runs a training academy in Mumbai. All coaches are AFC / FA/ UEFA licensed. They have a men’s & women’s team in the MDFA league. They also conduct various events related to children’s football. PIFA Vision - India in the 2022 World Cup !!!Anjali Shah Director Premier India Football Academy Evergreen Estate, Dr E Moses Road, Mumbai 400011 Phone: 91 22 3042 2263 Fax: 91 22 3042 2262 Email: anjali@pifacademy.com