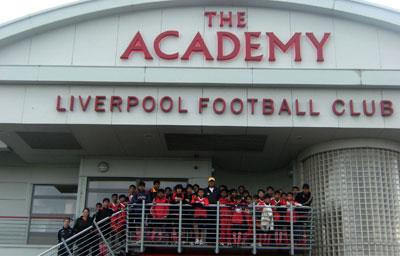 Premier India Football Academy (PIFA) are proud to announce their association with Liverpool International Football Academy Soccer Schools. This association will help PIFA organise camps in the Liverpool facilities and an opportunity to bring coaches from Liverpool to India. The association will also help PIFA to adopt the latest traininig methods employed by Liverpool.Some of the graduates from this academy are Jamie Carragher, Michael Owen and Steven Gerrard.PIFA has organised a camp to Liverpool from 1-9 June 2011. The participants will be train in Liverpool kit and will be coachedby UEFA / FA licensed Liverpool coaches at The Academy facilities at Kirkby in Liverpool. The campers will also visit Liverpool’s home ground especially the The home supporters' end of Anfield Stadium. "The Kop" which is still regarded as creating the most intense atmosphere in English football. The participants will be get to know what nutrition & fiteness program the Reds have that keeps them going as well as psychology sessions that maybe relieve what was said at half time at Istanbul that helped them win the Champions League Trophy after being down 0-3 to AC Milan.The children will also be taken to Alton towers Amusement Park as well as a bonus tour.This will be PIFA’s 24th camp to Europe since 2003. The academy has an AIFF I league 2nd division team - PIFA Colaba FC as well as other teams playing in the Mumbai league. Talented campers get selected to play in these teams. This is truly a lifetime experience to train at the greatest football academy.PIFA has been asscoiated with the best football academies in the World.For camp details you can call 9820268365 or visit the website www.pifa.co.inA Football Academy dedicated to training young Indian children. It strongly believes that the road to India's FIFA World Cup is thru the children, they are the future of India. PIFA organize camps in Europe & in India with UEFA Coaches as well as runs a training academy in Mumbai. All coaches are AFC / FA/ UEFA licensed. They have a men's & women's team in the MDFA league. It is also playing the i league 2nd division.. They conduct various events related to children's football.Associated with Real Madrid Fundacion, Rangers Soccer School, AC Milan Academy, Cruzerio EC, Hristo Stoitchkov AcademyPIFA Vision - India in the 2022 World Cup !!!Premier India Football Academy Evergreen Estate, Dr E Moses Road, Mahalaxmi, Mumbai 400011. (India) Phone: 91 22 3042 2263 Fax: 91 22 3042 2262 Email: info@pifacademy.com

You can edit or delete your press release PIFA tie up with Liverpool International Football Academy. here