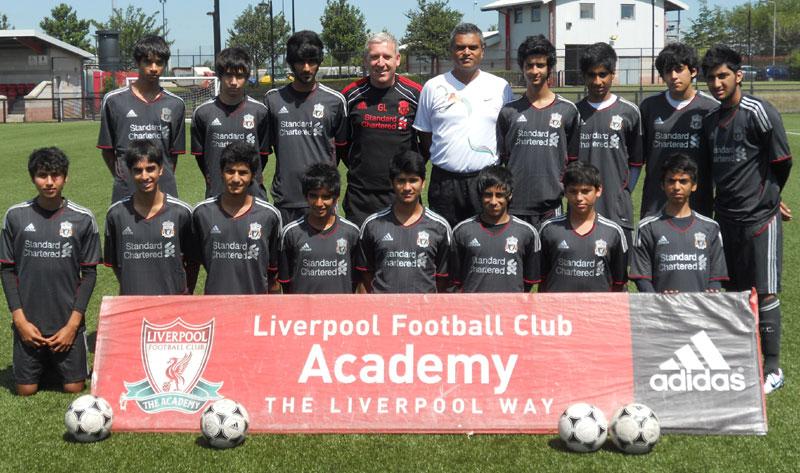 Premier India Football Academy (PIFA) organized their 24th international football camp to Europe this year. The PIFA Champions Tour 2011 was held at the Liverpool FC’s - “The Academy” at Kirkby in North Liverpool from 1-9 June 2011. Indian children got firsthand experience training under Liverpool academy youth coach Gary Judge licensed by UEFA.This is the first ever Liverpool camp held for international children at “The Academy”. The camp focused on technical training to help develop TABS - 'Technique', 'Attitude', 'Balance' and 'Speed'. Gary Lewis, Liverpool U15 coach and UEFA A license coach did a special session for the campers to develop awareness on the pitch. Coach Darren did a session on SAQ and the use of specialized equipments such as parachutes & resistant chords to help build power, speed and balance.The training was conducted every day on the astro-turf pitches both indoor as well as outdoor.The campers trained in Liverpool kit, got a tour of Anfield stadium and museum. They were treated to lunch at “The Boot Room” inside Anfield. The following day they were taken to Anfield for an interactive session at Reducate and a chance to pose with the UEFA Champions League Trophy won for the 5th time by Liverpool.The children had a surprise visit by Liverpool Academy graduate and now Liverpool player John Flanigan. The children had lots of questions for him and learnt a lot about being a professional player with regard to his discipline, training and diet.On the Sunday the campers were treated to an amusement park – Alton Towers.On penultimate day the children visited Old Trafford and were later invited to lunch at Jamie Carraghers restaurant in Liverpool – “Café Sports England”. Later in the evening the boys played a friendly match against the local side form RuncornNeel Shah was the final winner of skills test that were conducted through the camp. He won with a score of 730 points. The runners up was Yudister Jaisingh. Both the boys were presented with a trophy.All participants got a certificate from Liverpool signed by Ian Rush and a LFC gift set.“This was the by far the best camp that we have attended, in terms of facility, training and enjoyment, we look forward to returning very soon” - PIFA Director and UEFA licensed coach Nirvan Shah. The proceeds of these camps are utilised to develop team I league 2nd division team PIFA Colaba FC, a PIFA community football project undertaken by NGO - PIFA Foundation for benefit of sports in Colaba, Mumbai. The team in its 5th year of formation has reached the I league 2nd division and finished 3rd in the Elite MDFA league.A Football Academy dedicated to training young Indian children. It strongly believes that the road to India's FIFA World Cup is thru the children, they are the future of India. PIFA organize camps in Europe & in India with UEFA Coaches as well as runs a training academy in Mumbai. All coaches are AFC / FA/ UEFA licensed. They have a men’s & women’s team in the MDFA league. They also conduct various events related to children’s football.PIFA Vision - India in the 2022 World Cup !!!Premier India Football Academy 20 Evergreen Estate, Dr E. Moses Road, Mahalaxmi, Mumbai 400 011.Phone: 91 22 3042 2263 Fax: 91 22 3042 2262 Email: anjali@pifacademy.com

You can edit or delete your press release Indian children train at Liverpool Academy. here

11-21-2018 | Sports
NordVPN
Liverpool FC secures new partnership with NordVPN
Liverpool FC has today announced a new global partnership with leading cyber security company, NordVPN, to highlight the increasing importance of online safety and security. NordVPN will now become the club’s Official Cyber Security Partner and will work with Liverpool FC to provide fans with robust internet security solutions across their devices. The partnership will focus on protecting online fans across the world, as the club’s global digital fan community continues
01-23-2018 | Tourism, Cars, Traffic
SEO Liverpool
Liverpool SEO Agency – Experts for SEO
Liverpool SEO Agency – Experts for SEO The professional SEO Liverpool Agency We do a keyword research to find the best for a good Google result. Seomatik in Liverpool offers these services with different concepts and a holistic information architecture for your website. For a perfect Seo strategy, you need two optimization techniques, which are called On- an Offpage Optimization. If you want to apply SEO for your homepage, Seomatik Liverpool is
07-21-2017 | Advertising, Media Consulting, …
SEOMATIK
SEO Liverpool – SEOMATIK
SEO Agency in Liverpool SEOMATIK is a SEO Agency which is based in Liverpool. To guarantee the best results for our clients we use our own tools for analyzing and our international network system with different agencies for additional information exchange. Consequently, the SEO Liverpool agency SEOMATIK is one of the leading online marketing agencies worldwide. The Liverpool SEO Agency Our team will help you to improve the statistics of homepages and webshops.
06-26-2017 | Advertising, Media Consulting, …
SEOMATIK
SEOMATIK – Liverpool SEO
SEO Agency in Liverpool For our customers, we offer professional: SEO, SEA/PPS, banner and affiliate marketing, conversion marketing, social media marketing and search engine optimized web design. Putting all services together, the number of visitors and with that, the number of sales can increase significantly. The SEOMATIK team will help every client with his website or online shop. Therefore, we place an online marketing manager at his side who is his
07-09-2009 | Sports
Premier India Football Academy
PIFA conducts second Champions Tour to Liverpool and Manchester
Premier India Football Academy conducted their second 2009 PIFA Champions tour to Liverpool / Manchester from 14 to 23 June 2009. Children from Hyderabad, Bangalore, Delhi and Mumbai participated in this soccer intensive training camp conducted by Inspire Academy. The boys played a friendly match against Inter Union FC, a top local football club and held them to a 3-3 draw. Inspire Academy coach Mr Gary Lewis (UEFA A license &
11-06-2007 | Sports
Liverpool-Kop
Liverpool-Kop.com – The new independent Liverpool FC site launches
Jaimie Kanwar is proud to announce the launch of a different kind of Liverpool website – Liverpool-Kop.com. Critical realism in the analysis of Liverpool FC is almost nonexistent in the media, with the majority of the press and most Liverpool fan-sites engaging in any or all of the following: 1. Constant blind-faith praise: Always praising the team and the management regardless of what is happening on the pitch. 2. Intolerance of criticism
Comments about openPR
9 o'clock: discuss press release with client, 10 o'clock: submit release to openPR, within the briefest possible time release is published and displayed in a prominent place on openPR.de. I am thrilled!
Zehra Spindler, Calypso Now! - Communication Agency