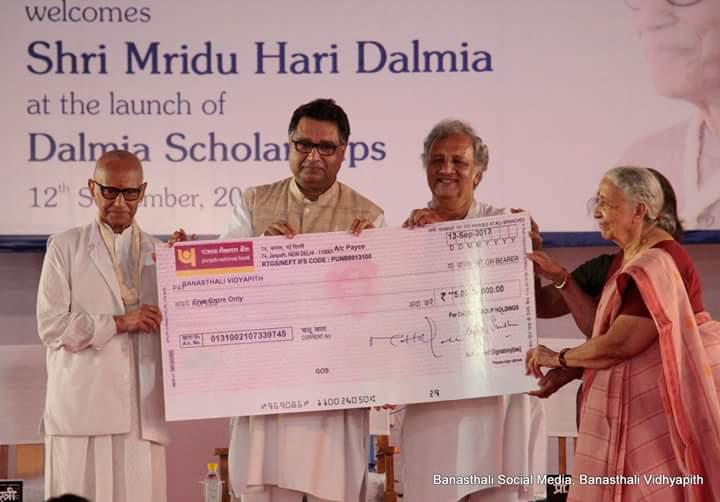 A Person's world is only as big as his Heart and there is no doubt that it is not he who has much is rich but he who gives much. Philanthropist Mr. Mridu Hari Dalmia who holds a Chemical Engineering degree from Jadavpur University Kolkata has been associated in different capacities with a whole spectrum of industries which include OCL India Ltd, First Capital India Limited, Artech Infosystems, JK Paper Ltd, Bharat Sugar, Dalmia Cement, Hari Machines Ltd and Dalmia Agencies.He served as the President of Indian Refractories Manufacturers Association, Cement Manufacturers Association, National Council for Cement and Building Materials. He had also played a stellar role in Dalmia Institute of Scientific & Industrial Research, FICCI, Associated Chambers of Commerce and Industry. On 12 Sep 2017, Sri Mridu Hari Dalmia was accorded a grand welcome at Banasthali at Gandhi Ghar after which he visited Adi Banasthali where the seeds of education were sown by young Shanta for the larger task of women empowerment. The spectacular ceremonial parade at Laxmibhai Maidan despite a heavy downpour only reiterated the indomitable spirit of Proud Banasthalites. The amazing horse riding display at Veer Bala Maidan and awe inspiring flying activities display at Marut Maidan had the dignitaries and audience spell bound. He also visited various departments of Banasthali and was impressed by the dynamism across the 1000 acre campus.In a mammoth gathering of Banasthali students and faculty, Prof Aditya Sastri welcomed Sri Mridu Hari Dalmia and gave a brief overview of his career span for the larger task of nation building. To a thunderous round of applause hitting the Richter scale of 8, Sri Dalmia announced the award of 51 Scholarships (17 per year) and Rs 5 Crores to Banasthali. In his speech, Dalmiaji reiterated that the Panchmukhi Shiksha – the fivefold education evolved over decades at Banasthali which imparts wisdom, character and discipline in enrolled students was worth emulating by other institutions and pointed out that linking salary of students in placements was not the right approach for ranking of educational institutions. Prof Chitra Purohit President and Prof Siddharth Sastri Vice President Banasthali also addressed the gathering. For the year 2017, 17 Banasthali Students were awarded the scholarships and the proceedings ended with singing of national anthem. The students, faculty and parents who attended the scholarship award function which was followed by a colourful cultural program left with beaming faces and pride that they were indeed part of an institution which is a jewel in the crown among the women’s universities not only in India today but across the globe.For more details about Banasthali see http://www.banasthali.org/About Banasthali: The Institution which is also the largest fully residential women’s university in the world has played a big role in revolutionizing women’s education in the country for the last eight decades with a belief that there is a tremendous role of higher education in empowering the women. Banasthali has scripted numerous success stories in a wide range of fields, and stands tall among the citadels of learning in India today. Team Banasthali with Vice Chancellor J C Bose Memorial Award for eminent scientist recipient Prof Aditya Shastri a highly acclaimed alumnus of BITS Pilani, SUNY State University of New York Stony Brook and MIT USA is indeed racing forward to be the very best among global women universities. Proud to be Banasthali alumni who call themselves as Banasthalites can be found in all latitudes, longitudes and altitudes in all walks of life across the globe.Banasthali University P.O. Banasthali Vidyapith Rajasthan – 304022 Phone 91 1438 228456 / 228341 Email: info@banasthali.ac.in Website: http://www.banasthali.org Facebook: www.facebook.com/Banasthali.org