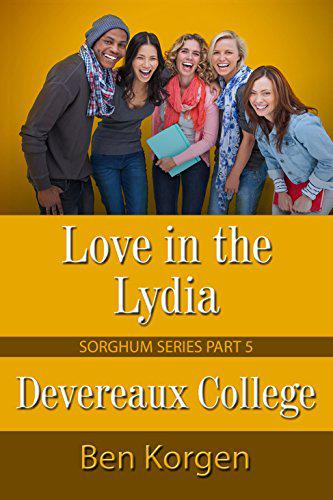 Love in the Lydia Devereaux College, by Ben Korgen, ends this crazy rom-com series with the most outlandish Rudy shenanigans yet of the Sorghum Series.Providence, RI, USA -- Ben Korgen's Love in the Lydia Devereaux College finishes the Sorghum Series with Rudy being romantically pursued by an ex-professional wrestler, and does she mean business!This fifth and final book in the Sorghum Series elaborates on a theme that survives all of the books of the series. Love is strange!English teacher Cynthia has a crush on football coach Rudy who finds her repulsive. Cynthia undergoes a makeover by a personal trainer who builds her into a professional wrestler. She is able to consistently defeat male professional wrestlers. After building great wealth and fame as a wrestler, Cynthia feels empowered enough to rekindle her romantic interests in Rudy and create a plan in which she will win him over. But first she must make him deeply indebted to her professionally then deeply in love with her in return for making all of his childhood dreams come true.Rudy's wife Connie is furious and conspires with Rudy to defeat Cynthia, expose her ruthless character to public view and provide her with a new romantic interest, all the while Rudy once again becomes Love's Lone Ranger, the title he earned in the first book of the Sorghum Series.Ben Korgen has had a highly varied career. He served in the US Navy, earned a bachelor's degree at the University of Minnesota Duluth, earned a master's degree at the University of Michigan in Ann Arbor, then coached high school football, earned a PhD in Oceanography at Oregon State University and had a long and rewarding career in Oceanography at the US Naval Oceanographic Office, the University of North Carolina in Chapel Hill and Tulane University in New Orleans.Genre - Creative, Coach, Repulsive, Teacher, Crushes, Rejection, Makeover, Wifestealer, Strategy, BattleThe ebook version of Love in the Lydia Devereaux College ISBN 9781506904382, published by First Edition Design Publishing (http://www.firsteditiondesignpublishing.com), is available on-line wherever ebooks are sold.About First Edition Design Publishing First Edition Design Publishing (aggregator) formats, converts and submits your book to over thousands of eBook and POD (PRINT) distribution points worldwide and to the top internet retailers including but not limited to - Apple, Amazon, Barnes & Noble, Kobo, Google, Ciando, e-Sentral, EBSCO and more.Media Contact: First Edition Design Publishing PO Box 20217, Sarasota, FL 34276 +1(941)921-2607 sales@firsteditiondesign.com http://www.firsteditiondesignpublishing.com

You can edit or delete your press release FED Publishing Releases New Book, "Love in the Lydia Devereaux College" by Ben Korgen here

01-02-2019 | Associations & Organizations
Universal Soul Love Ltd
Universal Soul Love - A Celebration of Love and Life
Universal Soul Love Day: The New Holiday Focusing On Compassion, Not Commercialism Sydney, Australia - December 29, 2018 - The commercialism and consumerism of the festive period doesn't sit well with many people. What was once a celebration of love and togetherness has become something different; it has become a time for spending, a time of loyalty to brands rather than to our fellow human beings, and, for millions of people
11-01-2016 | Fashion, Lifestyle, Trends
Paulis North End
Send Love Through a Sandwich
WHAT: As the age-old saying goes, “sharing is caring,” and on Thursday, November 3rd, 2016, Pauli’s, the neighborhood sandwich shop located in Boston’s North End, is celebrating National Sandwich Day with “Send a Sandwich,” allowing customers to call ahead and pre-pay for a sandwich order to send to that special someone. Famous for their “wicked fresh” ingredients and “crazy
01-28-2016 | Fashion, Lifestyle, Trends
simpleTechs GmbH
Mosband - spontaneous proof of love
The iOS app mosband is designed for men who want to appear at their best in a relationship, but sometimes lack ideas of how to do it. Mosband does not only remind men to surprise their girlfriend from time to time, but also delivers suitable tips at once. Berlin, 12.10.2015 - The mosband app recalls men to give a little pleasure or surprise to their partner in their daily routine. The
02-08-2011 | Fashion, Lifestyle, Trends
The Vintage Scarf
The Vintage Scarf=Love
SCARVES! What can we say? They are an absolute necessity in the closet of a glamour girly girl. From luxurious materials to bright, unique designs, scarves are always there to spruce up a drab outfit or put the finishing touch on a well-planned ensemble. Not only are scarves an inexpensive way to bring life to forgotten tops, they are useful in more ways than one. We were lucky enough to be
10-07-2008 | Leisure, Entertainment, Miscel …
All Things Media
I Love This School Tour
JUST ANNOUNCED - The I Love This School Tour with Billy Craig is set to begin the first week of November in Cleveland, Ohio. Created and produced by All Things Media and imusiccd.com, this age appropriate high-energy musical journey is filled with songs, laughter and original characters like Super Sam the guitar man, School Ja Boy, the hip hop rapper man and ZIGGY, the classic rocker dude. This show
09-20-2006 | Fashion, Lifestyle, Trends
VitalMessages.com
Cell Phone Love Life Booster
For those fed up with poor or difficult relationships or whose love life lacks lustre, cell phone technology is now being used to develop self-esteem and focus positive energy on your love life. A positive attitude and a clear goal often defines the difference between success and failure. And this is particularly true when it comes to our love lives. Low self-esteem or lack of confidence can often stand in the
Comments about openPR
9 o'clock: discuss press release with client, 10 o'clock: submit release to openPR, within the briefest possible time release is published and displayed in a prominent place on openPR.de. I am thrilled!
Zehra Spindler, Calypso Now! - Communication Agency