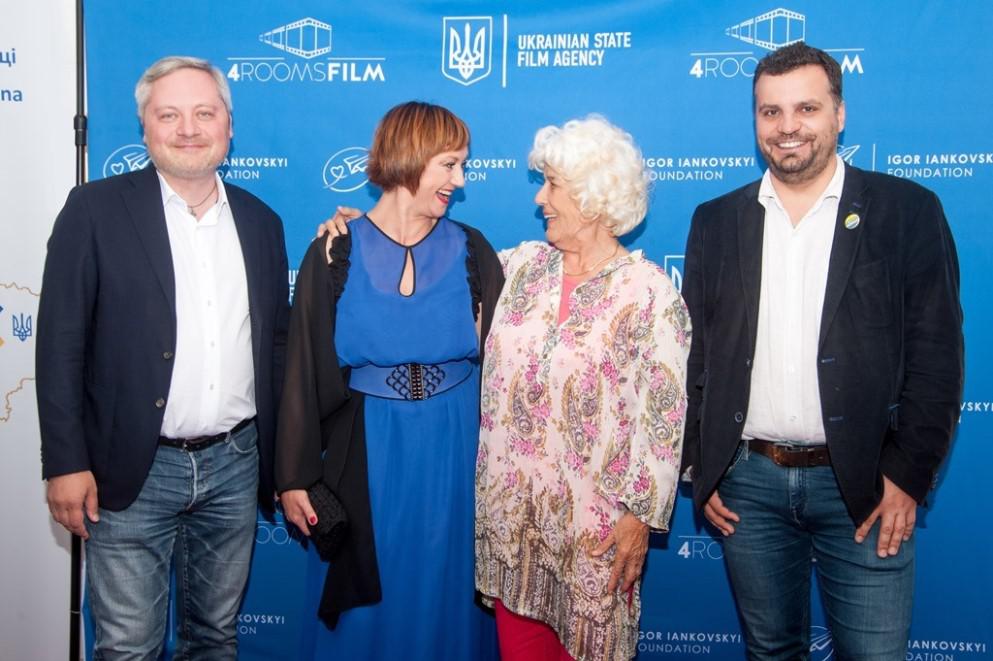 On the first week of June, Igor Iankovskyi Foundation, NGO “Initiative for the Future” and Monegasque Association Helping Hand, along with Ukrainian State Film Agency and Italian company 4RoomsFilm, have organized and successfully conducted “Days of Ukrainian Cinema in Roma”, for the first time in history of independent Ukraine.Italian public and representatives of numerous Ukrainian diaspora could enjoy: “The Nest of the Turtledove” by Taras Tkachenko, “Living Fire” by Ostap Kostiuk, “Trumpet-player” by Anatolii Mateshko, “My Granny Fanny Kaplan” by Olena Demyanenko and a classical national movie – “White Bird with Black Mark” by Yuri Illienko. Members of Ukrainian delegation, comprising Pylyp Illienko, the Head of Ukrainian State Film Agency, and Igor Iankovskyi, founder of eponymous Foundation, directors and actors were met at the door of the cinema theater by nationally-dressed young women with incredibly beautiful crowns with traditional bread and salt. These were Ukrainian activists and volunteers who made lots of efforts to make the event popular among Italians and our compatriots. Great part of applause took “The Nest of the Turtledove”’s shooting team. Everybody wanted to make a picture with starring actors: Rimma Ziubina, Lina Bernardi, Mauro Chipriani and director Taras Tkachenko. “I’m very glad to see such a festive atmosphere around “Days of Ukrainian Cinema in Roma”. When five years ago my Foundation started a support program for Ukrainian cinema abroad, I couldn’t even imagine the speed of development. We’ve just returned from Cannes, where two Ukrainian films at once have been competing in contests, we have Karlovy Vary Film Festival ahead, where the contest program also comprises two Ukrainian movies. This is truly incredible development! Our cinema enters the most prestigious world film festivals and takes rewards. We observe the revival of national cinema in Ukraine and we rejoice to have a direct influence on this movement”, - noted Igor Iankovskyi.The projections have been held in one of the most renowned roman Cinema Farnese, situated in historical part of Italian capital at Campo de Fiori. “Days of Ukrainian Cinema in Roma” have been opened by opening night of “The Nest of the Turtledove”, staged in Ukraine and Italy. Long before the start of the ceremony the square in front of the cinema began to fill by the representatives of Ukrainian diaspora in national outfits. The excitement was so great, that the opening night reunited a hundred persons more than the cinema theater could comprise. That’s why all the movies were repeated and the public could visit every of three screenings per day with Ukrainian movies. All the screenings were free of charge and there were those who attended all the three movies in a row. Near the entrance to Cinema Farnese, the participants of Ukrainian art-band “Stozhary” comprising Ukrainian students in Roma have performed rousing Ukrainian dance that didn’t left behind the attention of romans and the guests of Italian capital. Salutations “Slava Ukraini! – Geroyam Slava!” ("Glory to Ukraine! – Glory to Heroes!") were heard from everywhere. A little later those words were shouted by tourists and Italians from nearby cafes, situated around the perimeter of the Campo de Fiori. The square is a historical place itself, comprising a monument to Giordano Bruno, who had been staked at this very place. By the end of the day, the whole square had been involved into the celebration of Ukrainian cinema. “Days of Ukrainian Cinema in Roma” are opened by “The Nest of the Turtledove” not by a chance – this movie had been created in coproduction with Italian partners. This year will see a number of films made in cooperation with European cinema-makers. Today, Ukrainian cinema is booming: more than 100 cinema projects are being developed with the State support alone. For us it is crucial to develop cooperation with international partners. Such events as today truly help Ukrainian cinema-makers to establish business relations with their colleagues abroad. That’s why I’m sincerely thankful to Igor Iankovskyi Foundation that has been supporting our initiatives towards promotion of our cinema abroad”, - underlined Pylyp Illienko, the Head of Ukrainian State Film Agency.Before the opening ceremony, Cinema Farnese has accommodated a meeting of Ukrainian and Italian producers, who discussed the possibilities for cooperation and a master-class dedicated to particularities of such cooperation speaking of European cinema-support structures and foundations, organized by Italian event-companies Maia Workshops and 4roomsFilm. Pylyp Illienko, the Head of Ukrainian State Film Agency, has delivered a presentation on cinema developments in Ukraine and possibilities of coproduction between our countries. The informal communication continued at business-lunch serving traditional Italian food.Daily projections of Ukrainian movies have generated enormous interest among the public who didn’t want to let go the film-makers after each screening by long Q&A sessions.Igor Iankovskyi Foundation is continuously promoting modern Ukrainian cinema for the last five years. Due to this support Ukrainian delegations have the opportunity to take part at the biggest international film festivals in Cannes, Berlin, Karlovy Vary, and Tallinn and so on. Igor Iankovskyi Foundation issues the travel and participation grants to young Ukrainian directors in order to visit such festivals. Furthermore, due to the support of NGO “Initiative for the Future”, also founded by Igor Iankovskyi, the “Days of Ukrainian Cinema” have been successfully conducted in Munich, Paris, London, Amsterdam and Budapest."Initiative for the Future" – is a Ukrainian Charity Foundation, founded by Igor Iankovskyi – a successful Ukrainian businessman, financier and philanthropist. Charities unite like-minded people in a common goal - to develop and implement educational and cultural programs in Ukraine. Activities of the organization are based on voluntary initiatives.Since its creation, the Foundation supports talented young people from all over Ukraine, contributing to the creation of a highly cultured society. The Foundation has a strong international dimension, having successfully completed a range of projects abroad: in Belgium, Hungary, Czech Republic, Estonia, France, Germany, Netherlands, Poland, United Kingdom and the USA.Horizon Park” business center 12 Amosova Str., Kyiv, 03038, Ukraine

06-23-2017 | Arts & Culture
Igor Iankovskyi Foundation
IGOR IANKOVSKYI AWARDED THE FINALIST OF THE VTH UKRAINIAN CHILDREN'S DRAWING CON …
At June 17, 2017 in the Ukrainian House on Khreschatyk was awarding ceremony for the participants and winners of the anniversary Vth All-Ukrainian children drawing competition "UKRAINE – THE LAND OF TALENTS". The biggest Ukrainian children's creative competition for the fifth consecutive year, held at the initiative and financial support of the Igor Iankovskyi Foundation "Initiative for the Future", each involving the creative process hundreds of the talented children from
04-20-2017 | Arts & Culture
Igor Iankovskyi Foundation
IGOR IANKOVSKYI FOUNDATION SHALL CONDUCT SECOND BUSINESS-LUNCH «MEET UKRAINIAN …
Anniversary 70th edition of the Cannes International Film Festival will take place from 17th to 28th of May 2017 in France. This year Ukraine will be represented by its own pavilion at the professional platform - Marché du Film, jointly organized by the Ukrainian State Film Agency, «Molodist» KIFF, Ukrainian Cinema Association, Producer Association of Ukraine and National Charity Foundation of Igor Iankovskyi «Initiative for the Future». On the 21st of
04-07-2017 | Science & Education
Igor Iankovskyi Foundation
Igor Iankovskyi about the nine Ukrainian start-ups for responsible people
Internet of things (or IoT) is one of the most promising directions in technology. Commercial success of the majority of such start-ups proves: the innovations become closer. If in the XXth century the new technologies were strongly associated with “great projects” – discovery of space or nuclear synthesis, in the XXIth century the inventions are being tailored to human size. “Smart” gadgets and mobile applications help people to make the
04-07-2017 | Science & Education
Igor Iankovskyi Foundation
Igor Iankovskyi: why robotization shouldn’t be feared
Innovations in robototronics will completely transform the economy structure. In this regard, one question rises with increasing frequency: how will the machines affect our employment – whether the robots will make our life more easy and interesting or completely substitute the human labor? What prevail anyway – risks or opportunities? Both, - considers Martin Ford, businessman and futurologist from Silicon Valley analyzing “robototronics era” in his book “Rise of the Robots”. He

05-05-2022 | Advertising, Media Consulting, …
EloQ Communications
EloQ Communications calls for support for Ukrainian PR agencies
Ho Chi Minh City, Vietnam - To show support and care for Ukrainian PR community affected by the current Ukraine - Russia war, EloQ Communications, a leading PR and marketing agency in Ho Chi Minh city, Vietnam, calls for companies to consider working with or provide business referrals for these Ukrainian agencies. A helping hand sometimes can provide the biggest strength to those who are in difficulties. Due to the unwanted
01-31-2019 | Industry, Real Estate & Constr …
Kharkiv Bearing Plant HARP
Ukrainian bearing plant discovers Turkish market
In 2018, Kharkov Bearing Plant (HARP) share export was 64 %. This year the company is going to increase this index up to 70 %. HARP is going to begin 2019 with the entering the Turkish market. The first steps for this will be a debut participation of HARP in the international agricultural exhibition AGROEXPO, which will take place in Izmir on February 7-10. “Turkey is a prospective market for
08-22-2018 | Industry, Real Estate & Constr …
HARP
Ukrainian HARP enters Canadian market
Within demonstration tour Discover HARP, Kharkov Bearing Plant (HARP) starts to move further to the Canadian market. On September 11-13, the leading domestic producer of bearing products will take part in the largest agricultural exhibition of the North American continent – Canada's Outdoor Farm Show. HARP will become the only Ukrainian producer, which will present the bearings for agricultural sector at this event. “70-years production experience allows us to satisfy the
08-02-2018 | IT, New Media & Software
Intellias
Intellias Scored in Top 15 Largest Ukrainian IT Companies
On July 30, 2018, DOU.ua, the biggest community of IT professionals in Ukraine, announced its quarterly list of the largest IT companies in Ukraine. Intellias has grown to hold one of the top positions, currently sitting at 13th place on the list. The company jumped up three positions, from 16th place, since the previous listing. Remarkably, Intellias has kept its position as one of the top five fastest-growing companies among those
08-05-2011 | IT, New Media & Software
PMR Ltd
Ukrainian IT market worth €1bn
Ukrainian IT market increased by approx. 30% last year. In Euro terms its value crossed €1bn, which is comparable with the level recorded in 2005 and it represents a half of the value from 2007. In 2010 IT products and services sales bounced back. Ukraine got some economic recovery after the financial crisis and political stability after the presidential and local elections. According to the latest report by the research
04-20-2011 | IT, New Media & Software
Ukrainian Hi-Tech Initiative
Three new members joined Ukrainian Hi-Tech Initiative
April 18, 2011 – Kiev – Ukrainian Hi-Tech Initiative, a leading Ukrainian alliance in Offshore Software Development and IT industry, approved three new members. Ignite (www.igniteoutsourcing.com) leading global offshore software development company, with a fresh, open approach to software development. Ignite provides an agile global delivery model with Israeli, European and U.S. onsite personnel in the front and offshore development centers (ODC) in Eastern Europe, both EU and non-EU offshore destinations. Zfort
Comments about openPR
OpenPR ist the nicest and most clearly laid out PR platform I have seen to this day. The press releases are displayed very nicely and clearly and without any unnecessary frills. The updates are fast and the finished release looks appealing and is clearly legible. Even with 16 years of experience one discovers new things from time to time. Congratulations!
Gabriele Ketterl, Director Marketing & PR, Menads