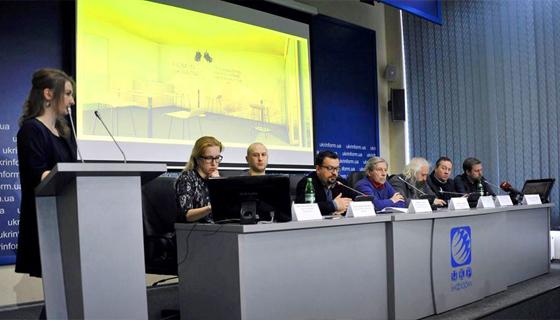 Anniversary 70th edition of the Cannes International Film Festival will take place from 17th to 28th of May 2017 in France. This year Ukraine will be represented by its own pavilion at the professional platform - Marché du Film, jointly organized by the Ukrainian State Film Agency, «Molodist» KIFF, Ukrainian Cinema Association, Producer Association of Ukraine and National Charity Foundation of Igor Iankovskyi «Initiative for the Future».On the 21st of May, Igor Iankovskyi Foundation and NGO «Initiative for the Future» jointly with the Ukrainian State Film Agency will conduct a business-lunch for cinema industry professionals «MEET UKRAINIAN PRODUCERS», for the second year in a row.«During the last year’s edition, Igor Iankovskyi Foundation organized the first «MEET UKRAINIAN PRODUCERS» business-lunch, which was a great success among Ukrainian and foreign producers. Ukrainian cinema was interesting to producers and directors from France, Italy, Germany, Lithuania, Poland, and Serbia and so on. As the result – several co-production projects with European producers started in Ukraine this year already. Such informal communication help our directors to establish useful connections and involve foreign partners to national cinema process», - told the representative of the Charity Foundation of Igor Iankovskyi «Initiative for the Future», Tagir Imangulov.Furthermore, this year the Foundation will support again the participation of Ukraine at the Short Film Corner section. The Foundation will cover the demonstration of films and travel expenses of the group of young Ukrainian directors from NGO Modern Ukrainian Cinema, who has already proven themselves at home.«Ukraine Is Your Destination» - this is the motto of Ukrainian pavilion. Under the festival, Ukrainian delegation will conduct a presentation entitled «Discover Ukraine» - describing our country as a cinematographic location with updated legislation, a set of modern services and industrial facilities. Also the pavilion will conduct presentations on the Festival Movement in Ukraine.A film by director Sergii Loznytsia has become one of the 18 participants of the main contest of the 70th Cannes Festival edition. The picture is created in co-production of Ukraine, France, Germany, Lithuania, Netherlands and Russia. In order to promote Ukrainian cinema, the Ukrainian State Film Agency will disseminate a catalog of Ukrainian movies for distribution and international festivals participation and information on productive potential of Ukraine.Charity Foundation of Igor Iankovskyi and NGO «Initiative for the Future» have organized many successful lunches and informal gatherings at international film festivals: in Berlin, Paris, Budapest, London, etc. Due to the organization’s support, young Ukrainian producers could meet foreign producers, but what is relevant is increasing number of projects in co-production. This is Igor Iankovskyi’ aim all along – to show talented Ukrainian youth, cultural and historical heritage, to develop Ukrainian cinema and get European and world audience acquainted with our country."Initiative for the Future" – is a Ukrainian Charity Foundation, founded by Igor Iankovskyi – a successful Ukrainian businessman, financier and philanthropist. Charities unite like-minded people in a common goal - to develop and implement educational and cultural programs in Ukraine. Activities of the organization are based on voluntary initiatives.Since its creation, the Foundation supports talented young people from all over Ukraine, contributing to the creation of a highly cultured society. The Foundation has a strong international dimension, having successfully completed a range of projects abroad: in Belgium, Hungary, Czech Republic, Estonia, France, Germany, Netherlands, Poland, United Kingdom and the USA.“Horizon Park” business center 12 Amosova str, Level 5, Kyiv, Ukraine

06-23-2017 | Arts & Culture
Igor Iankovskyi Foundation
IGOR IANKOVSKYI AWARDED THE FINALIST OF THE VTH UKRAINIAN CHILDREN'S DRAWING CON …
At June 17, 2017 in the Ukrainian House on Khreschatyk was awarding ceremony for the participants and winners of the anniversary Vth All-Ukrainian children drawing competition "UKRAINE – THE LAND OF TALENTS". The biggest Ukrainian children's creative competition for the fifth consecutive year, held at the initiative and financial support of the Igor Iankovskyi Foundation "Initiative for the Future", each involving the creative process hundreds of the talented children from
06-09-2017 | Arts & Culture
Igor Iankovskyi Foundation
Igor Iankovskyi Foundation and Ukrainian State Film Agency have successfully con …
On the first week of June, Igor Iankovskyi Foundation, NGO “Initiative for the Future” and Monegasque Association Helping Hand, along with Ukrainian State Film Agency and Italian company 4RoomsFilm, have organized and successfully conducted “Days of Ukrainian Cinema in Roma”, for the first time in history of independent Ukraine. Italian public and representatives of numerous Ukrainian diaspora could enjoy: “The Nest of the Turtledove” by Taras Tkachenko, “Living Fire” by Ostap
04-07-2017 | Science & Education
Igor Iankovskyi Foundation
Igor Iankovskyi about the nine Ukrainian start-ups for responsible people
Internet of things (or IoT) is one of the most promising directions in technology. Commercial success of the majority of such start-ups proves: the innovations become closer. If in the XXth century the new technologies were strongly associated with “great projects” – discovery of space or nuclear synthesis, in the XXIth century the inventions are being tailored to human size. “Smart” gadgets and mobile applications help people to make the
04-07-2017 | Science & Education
Igor Iankovskyi Foundation
Igor Iankovskyi: why robotization shouldn’t be feared
Innovations in robototronics will completely transform the economy structure. In this regard, one question rises with increasing frequency: how will the machines affect our employment – whether the robots will make our life more easy and interesting or completely substitute the human labor? What prevail anyway – risks or opportunities? Both, - considers Martin Ford, businessman and futurologist from Silicon Valley analyzing “robototronics era” in his book “Rise of the Robots”. He

01-31-2019 | Industry, Real Estate & Constr …
Kharkiv Bearing Plant HARP
Ukrainian bearing plant discovers Turkish market
In 2018, Kharkov Bearing Plant (HARP) share export was 64 %. This year the company is going to increase this index up to 70 %. HARP is going to begin 2019 with the entering the Turkish market. The first steps for this will be a debut participation of HARP in the international agricultural exhibition AGROEXPO, which will take place in Izmir on February 7-10. “Turkey is a prospective market for
08-22-2018 | Industry, Real Estate & Constr …
HARP
Ukrainian HARP enters Canadian market
Within demonstration tour Discover HARP, Kharkov Bearing Plant (HARP) starts to move further to the Canadian market. On September 11-13, the leading domestic producer of bearing products will take part in the largest agricultural exhibition of the North American continent – Canada's Outdoor Farm Show. HARP will become the only Ukrainian producer, which will present the bearings for agricultural sector at this event. “70-years production experience allows us to satisfy the
04-11-2018 | Industry, Real Estate & Constr …
LOZOVA MACHINERY
LOZOVA MACHINERY JOINED THE UKRAINIAN AGRIBUSINESS CLUB
LOZOVA MACHINERY joined the Ukrainian Agribusiness Club (UCAB) and became the only domestic producer of the agricultural implements among the association members. “To be the first and the best is that LOZOVA MACHINERY is seeking to and what unites our company and UCAB”, – Roman Girshfeld, Vice President Sales and Marketing, points out. The own unique developments and patented solutions, implemented in LOZOVA MACHINERY tools, allowed the company to be the first,
08-05-2011 | IT, New Media & Software
PMR Ltd
Ukrainian IT market worth €1bn
Ukrainian IT market increased by approx. 30% last year. In Euro terms its value crossed €1bn, which is comparable with the level recorded in 2005 and it represents a half of the value from 2007. In 2010 IT products and services sales bounced back. Ukraine got some economic recovery after the financial crisis and political stability after the presidential and local elections. According to the latest report by the research
01-26-2010 | Energy & Environment
ZORG UKRAINE Ltd.
Ukrainian biofuel industry receives tax benefits
By the 18-th of January 2010 the Ministry of Industrial Policy of Ukraine received 7 requests to proceed with a concessionary import of equipment, used within the industry of renewable fuels. Following information has been provided by the press-service of consulting company FuelAlternative. On January 1, 2010 Ukrainian government validated a law “On making changes and additions to the tax policy of Ukraine in order to facilitate production and
06-06-2007 | IT, New Media & Software
Hi-Tech Initiative
New member of Ukrainian Hi-Tech Initiative
21 May 2007, Kiev. Ukrainian Hi-Tech Initiative membership increased with a new company – “Krendls” (Dnepropetrovsk). “Krendls” is the European software development company located in Ukraine with the representative office in Germany. The company started its operation in 2006. Now it is a dynamically growing company providing fast and highly-functional solutions for B2B and B2C segments. Main development interests of “Krendls” are closer partnership with European companies as well as
Comments about openPR
We publish our press releases on openPR.de because we like people who are "open" - just like us.
Frank Obels, CEO, INCONET - Informationssysteme, Communication und Netzwerkberatung GmbH