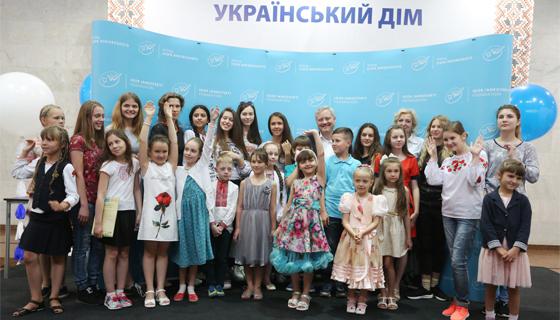 At June 17, 2017 in the Ukrainian House on Khreschatyk was awarding ceremony for the participants and winners of the anniversary Vth All-Ukrainian children drawing competition "UKRAINE – THE LAND OF TALENTS". The biggest Ukrainian children's creative competition for the fifth consecutive year, held at the initiative and financial support of the Igor Iankovskyi Foundation "Initiative for the Future", each involving the creative process hundreds of the talented children from all over Ukraine.During the competition, the jury sent 605 works of the young artists aged 5 to 17 years from 22 regions of Ukraine: Volyn’skyi, Donetskiy, Zhytomyrskyi, Transcarpathian, Zaporizhia, Ivano-Frankivskyi, Kyivskyi, Kirovohradskyi, Luhanskiy, Lvivskyi, Mykolayivskyi, Odesskyi, Poltavskyi, Rivnenskyi, Sumskyi, Ternopilskyi,, Kharkivskyi, Khersonskyi, Khmelnytskyi, Cherkasskyi, Chernivetskyi, Chernihivskyi.The number of pictures sent to the contest was the second leader of the age group (9-13 years), which sent 304 children art paintings. The most active by young artists creative works from Kyiv, Dnipropetrovsk, Odessa, Transcarpathian, Donetsk and Mykolaiv regions. In general, the creative call of the Iankovskyi Foundation by supported 94 schools, including first and second place was taken Dnipropetrovskiy region (Nikopol City Art School №1, who sent 40 works) and Kyiv (The Center of the non-school education of the Sviatoshynskyi district, which sent 44 of its students); Mykolaiv took the third children's art school 31 artwork."I congratulate the fifth anniversary of the All-Ukrainian children's drawing contest! For five years organized many exhibitions of the winners and finalists, both in Ukraine and abroad, particularly in the building of the UN General Assembly in New York City. So everybody could see our country through the eyes of the children. Our world is changing, and now all engaged in digital technology, IT. But I think the future is for creative people. Programs are taught themselves to write, collect machine work. And only in the works of man there is no substitute. I think that in 10-15 years these children, who are creating now such wonderful pictures, will be in demand in the business and creative profession it will move our future. A Foundation "Initiative for the Future" has always supported creative and talented young people in various fields: culture, science and innovation. We will continue to continue our charitable work", - said Igor Iankovskyi, the founder of the Foundation" Initiative for the Future", while welcoming participants and guests in the hall.The composition of the expert jury this year included: Natalia Poltavets known Kyiv artist, member of the National Union of Artists of Ukraine, Honored Artist of Ukraine pop art; Zvolynska Mary, the young winner of the Third All-Ukrainian competition for children "FAITH.HOPE.LOVE." And jury member of many art competitions, including the Kyiv Children's Academy of Arts; Vasil and Ivan Kostenko, the creative duo of extremely talented young graphic artists with special creative attitude, founders of "Brothers"; known Lviv artist Oleh Kolotay that currently resides in Rome (Italy), an active participant in many international art exhibitions, whose works are in private collections in Ukraine, Poland, Canada and Italy.The outcome of the professional jury selected 30 finalists among which defined the main prize 9 and 21 nomination shortlisted. In the age group of 5 to 8 years finalists are: Anastasia Starovoit (Kyiv City), Valeriya Hitryh (Bucha City, Kyivskyi region.) And top ranked Anastasia Taratina (c. Zhitomir) with the work "KOROLEV’ ERA CONTINUES: WE OPENS THE NEW PLANET". In the age group of 9 to 13 years finalists were Mariya Karpenko (Mykolaiv City) and Amina Dovhiy (Monastyrets City, Transcarpathian region.) And the first place took Ameli Ichenska (Kyiv City) with the art-work named "COUNTRY OF THE INSPIRATION". The leaders in the oldest age category contest for the age group 14 to 17 years were Kseniya Poustovit (Mykolaiv City), Margarita Hrihorchuk (Chernivtsy City), and the grand prize and first place won Victoriya Komarnytska (Kolomyia City, Ivano-Frankivskiy region) for artistic work " CREATIVE WORLD OF THE MARIA PRYIMACHENKO".Traditionally, all the young participants received honorary diplomas from the organizers of the contest and the finalists were awarded the beautiful art sets. The winners of the V-th All-Ukrainian competition for children "UKRAINE – THE LAND OF TALENTS" received the travel vouchers to the children's camp "Artek-Bukovel" for creative and recreational vacation. It is noteworthy that June 17-29, 2017 in the Ukrainian House opened hundreds of unique art exhibition of the finalists and winners works.At the end of the event Igor Iankovskyi Foundation organized various creative workshops, there are: manufacturing toys by the wet felting technique; volume manufacturing techniques by paperplastic compositions; the manufacture of toys from clay; manufacturing technology of the cards scrapbooking; with artistic of the painting bags; manufacturing the dolls. Children and their parents surrounded of the masters and within minutes were involved in the process of creating things with my hands.Over the years, the Igor Iankovskyi Foundation "Initiative for the Future" takes care of the creative generation of talented young Ukrainian. Thanks to his support, children reveal their creativity, spirituality and echo the creative generation of Ukrainian artists. Works of the finalists and winners were presented not only in Ukraine but also abroad. In particular, the participants of the III All-Ukrainian children drawing competition "FAITH.HOPE.LOVE." presented in the building of the UN General Assembly in New York City. Also, the exhibition of the children's paintings included in the final contest of the drawings exhibited in Belgium, France and Poland."Initiative for the Future" – is a Ukrainian Charity Foundation, founded by Igor Iankovskyi – a successful Ukrainian businessman, financier and philanthropist. Charities unite like-minded people in a common goal - to develop and implement educational and cultural programs in Ukraine. Activities of the organization are based on voluntary initiatives.Since its creation, the Foundation supports talented young people from all over Ukraine, contributing to the creation of a highly cultured society. The Foundation has a strong international dimension, having successfully completed a range of projects abroad: in Belgium, Hungary, Czech Republic, Estonia, France, Germany, Netherlands, Poland, United Kingdom and the USA.“Horizon Park” business center 12 Amosova Str., Kyiv, 03038, Ukraine

06-09-2017 | Arts & Culture
Igor Iankovskyi Foundation
Igor Iankovskyi Foundation and Ukrainian State Film Agency have successfully con …
On the first week of June, Igor Iankovskyi Foundation, NGO “Initiative for the Future” and Monegasque Association Helping Hand, along with Ukrainian State Film Agency and Italian company 4RoomsFilm, have organized and successfully conducted “Days of Ukrainian Cinema in Roma”, for the first time in history of independent Ukraine. Italian public and representatives of numerous Ukrainian diaspora could enjoy: “The Nest of the Turtledove” by Taras Tkachenko, “Living Fire” by Ostap
04-20-2017 | Arts & Culture
Igor Iankovskyi Foundation
IGOR IANKOVSKYI FOUNDATION SHALL CONDUCT SECOND BUSINESS-LUNCH «MEET UKRAINIAN …
Anniversary 70th edition of the Cannes International Film Festival will take place from 17th to 28th of May 2017 in France. This year Ukraine will be represented by its own pavilion at the professional platform - Marché du Film, jointly organized by the Ukrainian State Film Agency, «Molodist» KIFF, Ukrainian Cinema Association, Producer Association of Ukraine and National Charity Foundation of Igor Iankovskyi «Initiative for the Future». On the 21st of
04-07-2017 | Science & Education
Igor Iankovskyi Foundation
Igor Iankovskyi about the nine Ukrainian start-ups for responsible people
Internet of things (or IoT) is one of the most promising directions in technology. Commercial success of the majority of such start-ups proves: the innovations become closer. If in the XXth century the new technologies were strongly associated with “great projects” – discovery of space or nuclear synthesis, in the XXIth century the inventions are being tailored to human size. “Smart” gadgets and mobile applications help people to make the
04-07-2017 | Science & Education
Igor Iankovskyi Foundation
Igor Iankovskyi: why robotization shouldn’t be feared
Innovations in robototronics will completely transform the economy structure. In this regard, one question rises with increasing frequency: how will the machines affect our employment – whether the robots will make our life more easy and interesting or completely substitute the human labor? What prevail anyway – risks or opportunities? Both, - considers Martin Ford, businessman and futurologist from Silicon Valley analyzing “robototronics era” in his book “Rise of the Robots”. He

03-03-2021 | Advertising, Media Consulting, …
Ken Research Pvt Ltd
Ukraine Agriculture Market, Ukraine Agriculture Industry, Ukraine Agriculture Li …
Agriculture is one of the vital sectors of the Ukrainian economy. It is natural that Ukraine became world’s major sunflower oil exporter, second major grain exporter, forth corn & barley, sixth wheat and soybean and seventh poultry & honey exporter, and ninth major egg producer. The primary food harvest products are mainly barley, sugar beets, potatoes, rice, maize, soybeans, and wheat.  Apart from this, primary meat products are beef &
12-01-2017 | IT, New Media & Software
Market Research Hub
Ukraine: Country Intelligence Forecast Report 2022
To Understand the information and communication Industry Status worldwide, Market Research Hub (MRH) has included the recent Forecast report titled “Ukraine: Country Intelligence Report”, to its vast database. This study offers data about the prime regions operating in the ICT sector, along with their production, consumption, revenue and market share details. Further, the intelligent report also anticipates that the market would grow at a constructive CAGR until 2022. Click here for
06-12-2017 | Industry, Real Estate & Constr …
ReportsWorldwide
Agrochemicals Market in Ukraine
ReportsWorldwide has announced the addition of a new report title Ukraine: Agrochemicals: Market Intelligence (2016-2021) to its growing collection of premium market research reports. The report “Ukraine: Agrochemicals: Market Intelligence (2016-2021)” provides market intelligence on the different market segments, based on type, active ingredient, formulation, crop, and pest. Market size and forecast (2016-2021) has been provided in terms of both, value (000 USD) and volume (000 KG) in the report. A
03-09-2017 | Advertising, Media Consulting, …
GlobeMetrix
Global Rye Market 2017 - Ukraine , Turkey, Spain
The report entitled Global Rye Market 2017 presents key insights into the global Rye market along with the latest up-to-date industry details and forthcoming Rye industry trends, which will assist the readers to focus on product specification and end users driving the overall market revenue and profitability. Report Keynotes: The main motive of the report on "Global Rye Market 2017" is to study comprehensive details of the market investors, key industry players
03-07-2011 | Business, Economy, Finances, B …
Zorg Biogas AG
Poultry will power vehicles in Lugansk, Ukraine
02 March 2011 Zorg Biogas AG has started the documentation design of biogas plant in Lugansk region, Ukraine. Investments estimate to several million Euros. The plant will process 60 tons of poultry dung per day. Biogas will be purified to the condition of bio-methane. Gas yield will reach 183 m3/hour of gas according to GOST 5542-87, with methane content 95%. Bio-methane, an analogue of natural gas, will be used as a vehicle
11-02-2010 | Energy & Environment
ZORG UKRAINE Ltd.
Biogas attracts investors in Ukraine
In course of 2010 in Ukraine the development rate of alternative energy industry has significantly increased due to investments from NAER, credits provided by IFC and EBRD, ratification of an agreement between Ukraine and NEFCO and, finally, the adoption of law “About the green tariff.” Yet, Darya Revina, the head of Committee on ecological investments, alternative and renewable energy sources ICC Ukraine and Council of entrepreneurs within the Cabinet of
Comments about openPR
Your portal is fast, simple, and easy to use. Others may have more functions but they also demand more editing time, you have to preformat the text in order to achieve a good result etc. I think openPR is really fantastic!
Andreas Knepper, wallmedien AG