Tim Sandtler: Duelling In The Park 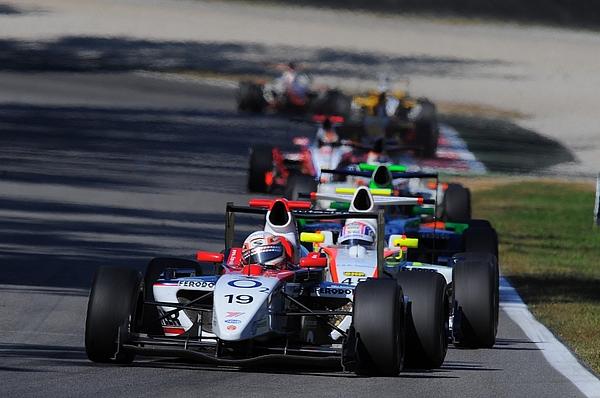 Tim Sandtler: Duelling In The Park

An exciting season in the Formula Master series came to an equally exciting conclusion in the royal park of Monza. In the first race, cars went flying in all directions on the historic circuit and the number of laps where the safety car was not leading the way were in the minority.Tim was one of the few drivers who kept his cool and avoided getting involved in any of the spectacular accidents. “On the long straights, you could get sucked into the slipstream and then you’d have anything up to three cars jostling with each other. It got pretty hairy at times,” he says. An additional factor was the desire of all the drivers to make a good impression in the final race of the season.In free practice, Tim certainly boosted his own credentials: P2 on a wet track in the first session and P5 in the drier second session. “In slightly damp conditions, we kept up with the front-runners really well,” he recalls. “Fifth position in the second session was also reasonable, as we weren’t on new tyres.” In qualifying, though, his performance was only enough for eighth on the grid. A lot of yellow flags and two interruptions didn’t exactly make it easy to clock a decent lap time. “We weren’t quite able to reproduce the good form that we had shown in free practice.”The first race didn’t get off to the start that the team had been hoping for: Tim’s revs fell away dramatically and he dropped back two places. Then the first of many accidents took place: “Cars were coming at me from all directions and standing side-on in the chicane. All I could see was dust and the track was blocked,” he says. When the chaos was sorted out, he emerged in 14th position. “Then, as a result of various incidents and passing manoeuvres, I worked my way up to P8.” On the last lap, he overtook fellow German Michael Ammermüller to secure pole position in the second race.“This time, I got off to a really good start,” Tim tells us. “Unfortunately, Schlegelmilch cut the chicane and overtook me on the first corner. Over the first few laps, I thought I might at least hang on to third, but then I started to fall back with each successive lap.” Pronounced oversteer caused by a technical fault was making the car more and more difficult to control. “As a result, I spun in the Parabolica, lost momentum and saw my chances disappear.” His opponents came sailing past one after another. “There wasn’t a lot I could do. I was out of ammo.” The most likely cause was a slow puncture on the rear right tyre. Even so, his seventh position in the first race brought him a few additional championship points.“We have got better with each successive race. We’ve often been up at the front but we’ve also had a lot of bad luck, which meant that we weren’t able to turn our good work into good results,” says Tim, summing up his season. “I had hoped to finish in the Top 3, so in this respect, we have fallen short of our expectations. And yet, there were some highlights such as my podium finish in Estoril. I feel that, with just a bit more luck, we could have gone one better in quite a few more races.”Press Contact: Stephan Heublein Tel: +49 (0)89 500 948 84 Email: redaktion@adrivo.comadrivo Sportpresse GmbH Liebenauer Hauptstrasse 106/6 A-8041 Graz Tel: +43 (0)316 915 252 Fax: +43 (0)316 915 253 Email: info@adrivo.com www.adrivosportpresse.comAbout adrivo Sportpresse GmbH: adrivo Sportpresse GmbH publishes at www.Motorsports-Magazine.com one of the most popular motorsports online magazines. The website reaches a core fan base in Germany, Austria and Switzerland. It captures all the magic and glamour of motor racing, bringing its visitors compelling reports from all the different championships.The company also runs the official websites of Michael Schumacher and Formula One star Nick Heidfeld as well as working in close cooperation with some of the major figures in international motor racing.Furthermore, adrivo Sportpresse GmbH provides and distributes high quality editorial motorsport content. The flexible and customizable content portfolio is available in up to 10 languages. The clients include relevant on- and offline media like Spiegel, AutoBild, T-Online, Lycos etc. as well as companies that sponsor motorsports like DHL, Deutsche Post World Net, Bridgestone, and many more.Through Motorsports-Magazine.com and our client’s adrivo media network we reach around 4,5 million motor racing fans each month. Our content has become very influential and an opinion maker in Germany, Austria and Switzerland!

You can edit or delete your press release Tim Sandtler: Duelling In The Park here

04-27-2009 | Sports
adrivo Sportpresse GmbH
iSport plans F1 entry
GP2 team boss Paul Jackson is planning to bring his iSport stable into Formula One in the event that spending is capped from the 2010 season. Jackson revealed his intention in an exclusive interview with Motorsports-Magazine.com: “I aim to give a few people in F1 a kick up the backside and to show them that they are chucking money out of the window for nothing.” But the precondition for any Formula
03-14-2009 | Sports
adrivo Sportpresse GmbH
New motorsport magazine goes on sale
Following the recent rebranding of the popular and influential motorsport website "adrivo.com" to "Motorsport-Magazin.com", operator adrivo Sportpresse GmbH have come up with a fresh surprise as the racing season gets underway. The 30-strong editorial team led by Stephan Heublein and Falko Schoklitsch is now to publish a new, monthly German "Motorsport-Magazin" in print format. This will be distributed via Mountains Publishing with adrivo Sportpresse GmbH having full responsibility for the
02-26-2009 | Sports
adrivo Sportpresse GmbH
adrivo.com becomes Motorsport-Magazin.com
Germany’s popular dedicated motorsports magazine ‘adrivo.com’ is gearing up for the new Formula One season. Sporting a new logo and fresh livery, the magazine will now be published under its new name: Motorsport-Magazin.com. According to the latest survey by AGOF (Study Group Online Research) ‘internet facts 2008-III’, the magazine achieves a net reach of 120,000 persons per month, and that’s just in Germany. In total, Google Analytics measures ~ 1 million
09-25-2008 | Sports
adrivo Sportpresse GmbH
Tim Sandtler: Matching The Leaders For Speed
An exciting track, P3 in qualifying and a spectacular chase in Sunday’s race: Imola came so close to providing the long-awaited success for Tim. “Things were looking so good,” he says wistfully. “It’s all the more annoying to know that you could have been up there with the front-runners on your own merit.” But it wasn’t to be. In free practice, Tim immediately adjusted to the new track despite the

09-25-2008 | Sports
adrivo Sportpresse GmbH
Tim Sandtler: Matching The Leaders For Speed
An exciting track, P3 in qualifying and a spectacular chase in Sunday’s race: Imola came so close to providing the long-awaited success for Tim. “Things were looking so good,” he says wistfully. “It’s all the more annoying to know that you could have been up there with the front-runners on your own merit.” But it wasn’t to be. In free practice, Tim immediately adjusted to the new track despite the
07-30-2008 | Sports
adrivo Sportpresse GmbH
Tim Sandtler: Continuing to make headway
Tim had mixed feeling about his return to Brands Hatch. Friday brought a sensation of déjà-vu, as he was already familiar with the 1.93km reduced-length circuit from the Formula 3 Euro Series. For the qualifying session on Saturday and without any extra time for free practice, they switched to the 3.7km full-length circuit which Tim and half the other contestants had never driven on before. “The additional part of the track
07-16-2008 | Sports
adrivo Sportpresse GmbH
Tim Sandtler: First Breath Of Podium Air
As the season reached its halfway point in Estoril, Tim found himself on the podium for the first time in his Formula Master career. In qualifying, he already had the strong feeling that he and his team were starting to get things right. “The characteristics of the Estoril circuit are actually quite similar to those of Valencia,” says Tim. “The track surface is very rough and aggressive, so I had
06-04-2008 | Sports
adrivo Sportpresse GmbH
Tim Sandtler: The Streets Of Pau
Place: Pau (France) Dates: 30th May - 1st June 2008 Track length: 2,76km Race 1 Grid Position: 15 Result: 10 Race 2 Grid Position: 10 Result: 22 Monaco, Macao, Pau. Star-studded, glamorous and technically demanding – street circuits hold a special fascination for the motor racing world. One thing that all street circuits have in common is the virtual impossibility of staging an overtaking manoeuvre, particularly in rainy conditions when the risk of an accident increases dramatically. But that wasn’t going to stop Tim Sandtler doing
05-20-2008 | Sports
adrivo Sportpresse GmbH
Tim Sandtler: Catch-up in the rain
Race weekends are a law unto themselves and every race track has its own peculiarities. Just two of the lessons that Tim will be taking away with him from the opening Formula Master event in Valencia. During the winter tests, Tim was up with the front-runners right from the start. Even when he briefly got behind the wheel for the first test in Monza, he was amongst the leading group.
05-20-2008 | IT, New Media & Software
Orga Systems GmbH
Orga Systems selected for TIM MVNO billing
Paderborn, Germany/Rome, Italy, 15. May 2008. Orga Systems has supplied Telecom Italia with its fully convergent real-time billing platform OPSC Gold to power MVNOs and enable multi service provider support. With regards to this growing market opportunity, two elements are essential: rapid service offerings and top performance. Therefore, TIM Italy builds on Orga Systems’ internationally recognized real-time billing expertise. All processes are managed within this one system - whether wholesale
Comments about openPR
OpenPR ist the nicest and most clearly laid out PR platform I have seen to this day. The press releases are displayed very nicely and clearly and without any unnecessary frills. The updates are fast and the finished release looks appealing and is clearly legible. Even with 16 years of experience one discovers new things from time to time. Congratulations!
Gabriele Ketterl, Director Marketing & PR, Menads